After a bye week, Northwestern heads to Camp Randall Stadium in Madison, Wisconsin for a matchup with the Wisconsin Badgers on September 30. We’ve got you covered with a full preview.

Two years ago — the last time Northwestern was in Madison — the Wildcats took down Wisconsin in one of the most bizarre finishes we’ve seen in a while. Check this out for a refresher on the madness that was November 21:

The last-minute controversy grabbed the headlines, but lost in that was the single-digit Northwestern’s defense allowed to Wisconsin. On top of that, the Badgers’ normally-potent rush attack put up a stunning -26 yards.

Last year, Wisconsin completely stifled the Wildcat offense en route to a 21-7 win at Ryan Field. As a team, Northwestern rushed for a meager 39 yards, an attack so weak that Thorson had to pass the ball a season-high 52 times.

This year, what many have been touting as Pat Fitzgerald’s best-ever squad faces a Wisconsin team returning 66 percent of its production, compared to 67 percent for Northwestern. Let’s take a look at some of the specific matchups.

As Justin Jackson looks to cement his legacy as the greatest back in Northwestern’s history, the greatest question is Northwestern’s passing production without Biletnikoff Award finalist Austin Carr, now in New England. Last year, 1,247 of Thorson’s 3,182 passing yards were amassed by Carr. That’s over 39 percent. How the production can be replaced is a question mark, and the Flynn Nagel, Macan Wilson, Solomon Vault and Bennett Skowronek will be leaned on. I am going to avoid saying that Northwestern’s major weakness is the receiving corps and that there are no viable options. We said that last year, and… 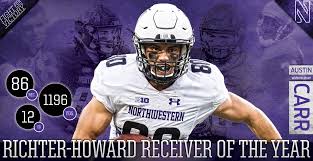 It’s a question mark. I’ll leave it at that. Running the ball. Justin Jackson looks for his FOURTH consecutive 1,000+ yard season and John Moten continues to solidify himself as a dependable backup, with Warren Long having transitioned to linebacker. That’s a stable part of the offense. The offensive line, especially pass blocking, struggled mightily at times last season but boasts more valuable experience in 2017.

The problem: Wisconsin’s defense is good. Even with T.J. Watt and Vince Biegel having moved on to the NFL, these guys are nasty. Last season, the Badgers allowed just 15.5 points per game. That was fourth in the country. With standouts Jack Cichy, T.J. Edwards and Ryan Connelly leading the charge, the front seven is set, even with the departures of Biegel and Watt. Edwards led the Badgers in tackles last season, and the other two, alongside Chris Orr, have all been extremely productive. Plus, Wisconsin’s defensive line remains almost entirely intact.

Without Sojourn Shelton and Leo Musso, expect Wisconsin’s secondary to take a minor step back, but they will be just fine with Derrick Tindal anchoring the unit. Opponents mustered just 6.50 yards per pass against Wisconsin last season, and don’t expect too much regression.

Case in point: Wisconsin’s defense is good. Even though we should expect improvement from many aspects of Northwestern’s offense (save the receiving corps), scoring in bunches will be tough against the Badgers.

All modern offenses start with the quarterback, even a run-heavy attack like that of the Badgers. This year, it’ll be Alex Hornibrook leading the way. In 2016, Hornibrook’s redshirt freshman season, he was in and out of the starting role due to injury and inconsistency: he completed just 58.6 percent of his passes. Hornibrook is no Russell Wilson, but he possesses speed and agility, so Northwestern’s linebacking corps — now without captain Anthony Walker Jr. — will need to be on its toes. Wide receiver Rob Wheelwright has moved on, but Jazz Peavy (who you may remember from 2015) and Tony Fumagalli are back. A senior tight end, Fumagalli’s numbers don’t pop out (580 yards in 2016), but Wisconsin’s ground-and-pound offense favors a tight end like him. Another note for the linebackers.

Clement, who ran for 106 yards on thirty two carries last year in Evanston, is now taking handoffs for the Philadelphia Eagles. There was also Dare Ogunbowale, now with Houston. Inheriting his workload are two more standouts: Bradrick Shaw and Chris James. Shaw has drawn Melvin Gordon comparisons — his 6-foot-1, 205-pound frame might be some of the reason why. Shaw is expected to be the feature back, with James standing in as the change-of-pace back. He is speedier and averaged five yards per carry a year ago, a number synonymous with many Wisconsin backs.

But the Badgers’ secret sauce has always been its offensive line: five burly, 300+ pound Wisconsin boys lining up to pave the way for explosive backs. In 2017, four of them will return. Defenses beware.

Northwestern’s defense will be anchored by the Sky Team™ this season. Potentially one of the nation’s top secondaries, made up Godwin Igwebuike, Kyle Queiro, Montre Hartage and Keith Watkins II, Northwestern’s back line likely won’t be tested much by a run-focused Wisconsin team. But the run-run-run-run-play action bait will be crucial for the defense to watch out for. Looking at the front seven, with Walker Jr. gone and questions swirling regarding Xavier Washington’s status, Northwestern has a little inexperience up front. Tyler Lancaster and Joe Gaziano will try to plug up holes up front, as the battle in the trenches will be crucial against this Wisconsin team.

Prediction: Wisconsin 20, Northwestern 10. Points will be too hard to come by against Wisconsin. Even if the Badgers put up just a touchdown or two, their stifling defense can keep Northwestern quiet enough for a win. For the Wildcats to win, they’ll need to depend on Justin Jackson to make plays past the second level of defense — as winning the battle in the trenches is a tall task against Wisconsin.