Posted on August 6, 2017 by Will Greer Leave a comment 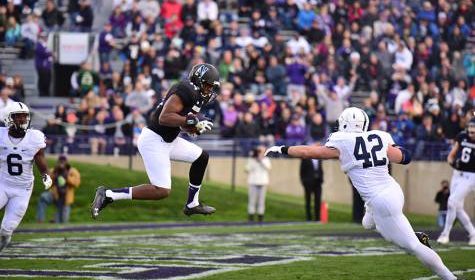 This time last year, if you had asked almost any Penn State fan how warm their head coach James Franklin’s seat was entering his third season in charge of Nittany Lions football, he or she likely would have responded with some variation of “quite hot.”

Franklin had coached Penn State to consecutive 7-6 seasons in his first two years and had amassed a suspect-at-best combined 6-10 conference record during those campaigns. But even worse for Franklin? Penn State was showing no signs of improving to the outside college football world. The Nittany Lions received zero votes in the preseason Coaches Poll last August.

Fast forward to August 2017 and Penn State is ranked No. 6 in that preseason poll after coming off an 11-3, Big Ten championship, narrow-Rose-Bowl-loss season that not only cooled off Franklin’s hot seat but also heated up expectations for a program trying to regain its place in the national spotlight. Penn State represents on paper, quite simply, the toughest challenge on Northwestern’s schedule.

The S&P+ Ratings derived by Bill Connelly projects Penn State to be the 8th best team in college football after they finished 8th last year. Wisconsin, who is preseason No. 11 in Connelly’s projections, and Penn State represent the only preseason top-40 teams on Northwestern’s schedule. Tough luck, I suppose, to play those games in consecutive weeks.

While some have remarked that Penn State was, for lack of a better phrase, the beneficiary of some good luck in its 11-win season last year – much akin to Northwestern’s 10-win campaign in 2015 – the Nittany Lions return so many huge pieces from last year’s team to, in this writer’s opinion, justify their preseason hype. Look no further than a downright scary Penn State offense to understand why so much hype exists.

The likely most talented player Northwestern will have to defend all season resides on the Penn State offense, and his name is Saquon Barkley. Barkley, on a Heisman shortlist for many college football experts, is coming off a second-team all-American sophomore season in which he amassed 1496 yards on 272 carries (an average of 5.5 yards per) and scored 18 touchdowns. To put it bluntly, the preseason all-Big Ten running back is really, really good.

The good news for Northwestern and other teams on Penn State’s schedule is that the Nittany Lions lose a few important pieces of their offensive line to graduation, likely forcing them to start three sophomores up front, but Barkley profiles to most as talented enough to “get his” regardless of how inexperienced his O-line is and how good your D-line might be. Northwestern’s front seven will be pushed to the limit against Barkley and Penn State. Cross your fingers that Xavier Washington will be eligible for this game.

And as if Barkley isn’t enough of a threat, the Nittany Lions also boast a serious weapon at quarterback in junior Trace McSorley. McSorley, forced to back up Christian Hackenberg during his redshirt freshman season, had a breakout sophomore year in which he threw for 29 touchdowns (contrasted by just 8 interceptions) and ran for another seven. He can absolutely be classified as a dual-threat kind of guy, and while Northwestern’s experienced secondary – which is on paper the cream of the Wildcats’ defensive crop – should be able to limit McSorley’s passing attack, his ability to run should be quite a test for the ‘Cats’ less experienced linebacker corps.

If there’s a group on Penn State’s offensive depth chart that should see some regression from 2016, it must be its wide receivers. The Nittany Lions lose third-team All-Big Ten receiver Chris Godwin after three college seasons to the NFL draft (Tampa Bay drafted Godwin in the third round). And while Godwin accounted for 11 of Penn State’s 29 receiving touchdowns last season, the Nittany Lions do boast a plethora of other options to challenge Northwestern’s secondary, headlined by senior tight end Mike Gesicki.

Penn State, who has seemingly forever been associated with tough, defense-oriented football, should boast one of the nation’s top offensive attacks in 2017. Northwestern’s best bet for slowing down the Nittany Lions? Turnovers.

There aren’t a ton of on-paper holes for the Penn State defense, but the Nittany Lions defensive line likely represents Northwestern’s best chance for offensive success. Penn State loses two veteran, all-Big Ten defensive ends in Garrett Sickels and Evan Schwan and will therefore be forced to start some less experienced guys up front. That being said, Penn State is projected to start two redshirt senior defensive tackles in Curtis Cothran and Parker Cothren (it’s almost like they planned it) up the middle. Justin Jackson should be able to find some success in early down situations, and his success will be paramount to sustained Northwestern drives.

The Penn State linebacker corps, which should be able to have at-least-decent success at hurrying quarterback Clayton Thorson, is headlined by senior Jason Cabinda, who returns after a third-team all-Big Ten season in 2016.

And while Thorson and Jackson should have okay success running the football, Northwestern’s passing game will be seriously tested against a seriously good, seriously experienced Penn State secondary. Of Penn State’s projected two starting cornerbacks and two starting safeties, three are seniors. The group is headlined by Marcus Allen, who returns after a third-team all-Big Ten campaign and is slated to be taken in the early rounds of next April’s NFL Draft. If Northwestern can’t gain traction on the ground and is forced to pass in third-and-long situations, it could be a long day for the Wildcats’ offense.

I’ll make this short and sweet. Penn State’s kicker Tyler Davis is coming off a first-team all-Big Ten season in which he connected on 22 of 24 attempts and was a perfect 3 for 3 on attempts of 40+ yards. Simply put, he’s one of the best kickers in the nation and could be a difference maker in a close game.

Knowing very little about Penn State until I sat down to research the Nittany Lions and find out what all the hype is all about, I now understand why this team enters 2017 with a preseason top-ten ranking. They are very, very good on both sides of the ball and don’t have a glaring weakness. Northwestern will need some turnovers, a career day from Jackson, and a bit of homecoming magic to pull off the upset.