Everything* You Need to Know About… Nevada

Posted on August 29, 2017 by Austin Miller Leave a comment

Northwestern embarks on a brand new football season on Saturday when the Wildcats host Nevada (2:30 CT, WNURSports.com). With the Wildcats not having faced the Wolf Pack since 2007, our Austin Miller tells you everything* you need to know about Nevada.

Ah, Nevada. Home of Las Vegas, US governmental lands where there may or may not be aliens and… Wait, what else is in Nevada? Is there anything else in Nevada besides casinos and (maybe) aliens?

Turns out there is!

The old adage is that in order to beat your opponent, you must first know your opponent. With that in mind, let’s get to know the Nevada Wolf Pack (more on that very important space in a little bit) before they take the trip to Ryan Field this Saturday.

The University of Nevada is located not in Las Vegas (that’s UNLV, folks!) but rather in Reno, a city which calls itself, “The Biggest Little City in the World.” No, seriously, there’s even a sign: 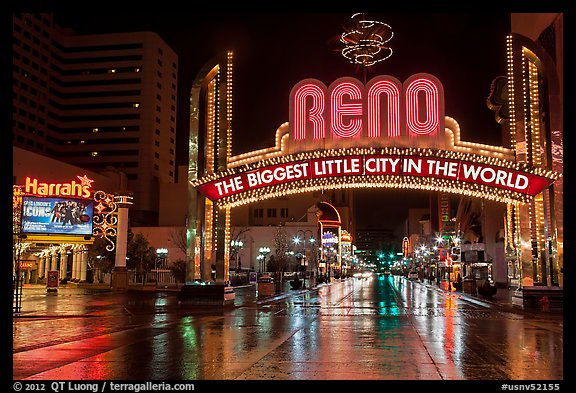 With a population of over 235,000, Reno bills itself as “the largest city in Northern Nevada” which is like calling Evanston “the biggest city directly north of Chicago.” Congrats Reno, you’re bigger than the metropolis of Elko.

Reno was named for Civil War general Jesse L. Reno, who served in the Mexican-American War before his time as a commander of Union forces. By all historical sources, it doesn’t look like General Reno ever set foot in the area where they named a city after him.

Until the 1930’s, Reno was little more than a town alongside a railroad. The city was fairly successful economically as the biggest city between Sacramento and Salt Lake City on the railway but remained little more than a stopover for travelers making their way from the east coast to the much more successful cities of Sacramento and San Francisco.

Then, on March 19th, 1931, Nevada legalized gambling, and, well, all hell broke loose. Alongside its new status as the mecca of gambling for a large portion of Californians, Reno adopted very liberal divorce laws, leading famous journalist Ernie Pyle to write, “All the people you saw on the streets of Reno were obviously there to get divorces.”

Gambling, and all that came with it, helped vault Reno into its status as the second most important city in Nevada (sorry, Elko). While Las Vegas became the gambling mecca of the world, Reno found an important foothold: fulfilling the compulsive gambling desires of northern Californians who didn’t much want to drive all the way to Vegas.

By all accounts, Nevada is a throughly adequate college. 17% of the student body are business majors, with the business school once picking up a top-25 ranking, and another 12% are majoring in health professions.

If you’re looking for a fun fact about the university itself, Nevada is home to a Center for Basque Studies. Founded in 1967 to study the Basques who had helped settle the American West, the center has now become, “the leading institute of its kind outside the European Basque homeland.” Who knew?

HOME OF THE WOLF PACK:

Athletic teams at Nevada were originally known as the Sagebrushes in honor of the state flower of Nevada, but in 1923, a journalist described the school’s athletic teams as a “pack of wolves,” and the rest was history. Once again, proof that journalists ruin everything.

Nevada is very particular about how you stylize their name. Don’t go around calling them the Wolfpack (that’s NC State, dontcha know!) but rather refer to them as the Wolf Pack. Their mascot is “Wolfie” who looks exactly like you’d expect a wolf mascot to look: 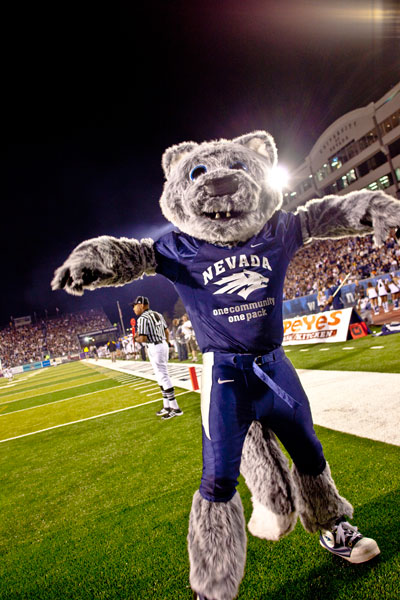 The Wolf Pack currently play in the Mountain West, but before that were, at various times, members of the Northern California Athletic Conference (didn’t make sense to me either), the West Coast Conference, the Big Sky Conference, the Big West conference, and, of course, the WAC. Essentially, if there is a conference on the west coast that isn’t the Pac-12, chances are at one point Nevada was a part of it.

Much like the university itself, Nevada’s athletic programs are pretty thoroughly adequate. Men’s basketball is probably the standout sport, with the Wolf Pack once qualifying for the Sweet 16. Of the other sports, each has a few conference championships cobbled in, but no real impressive results on the national stage, aside from that one time in 2004 when the rifle team finished second nationally.

Nevada’s football program was long run by Chris Ault, who took charge of the program in 1976. In what was then known as Division I-AA, the Wolf Pack had their most successful year in 1990, when the team won back-to-back triple overtime thrillers in the NCAA quarterfinals and semifinals before losing to Georgia Southern in the National Championship game. In 1992, the Wolf Pack made the jump to Division I-A (today the FBS). In 1995, Ault retired, moving into a role as the school’s athletic director. But after two coaches failed to adequately replace him, Ault moved back down to the sidelines in 2004, when he fired Chris Tormey, and subsequently named himself head coach (talk about job security). It was in this time that Ault perfected the “pistol” offense.

In 2007, the Wolf Pack and freshman quarterback Colin Kaepernick (you’ve probably heard of him) set a new record for points scored in an NCAA game, when they were defeated by Boise State in the fourth overtime by a score of 69-67. 2007 was also the last time Nevada and Northwestern met. With 21 seconds left and the Wildcats trailing 31-27, C.J. Bacher found Ross Lane for the go-ahead touchdown in Northwestern’s 36-31 win. The two teams met for the first time in 2006, with Nevada claiming a 31-21 win in Reno.

2010 was probably the best year for the modern era of Nevada football, as the Wolf Pack finished 13-1, losing only to Hawaii. That year, Kapernick, a senior, led Nevada to a bowl win against Boston College in the Kraft Fight Hunger Bowl.

Ault retired (again) in 2013, and was last seen leading the Milano Rhinos to an Italian bowl victory. No, seriously.  Ault was replaced by Brian Polian, who definitely didn’t get the job because of his last name. Polian went 23-27 in four seasons in charge in Reno, winning seven games twice and qualifying for a pair of bowl games. Following the 2016 season, Polian and the Wolf Pack mutually agreed to part ways.

2017 marks the first season in charge for new boss Jay Norvell, who joins the program from Arizona State, where he was the passing game coordinator. One of Norvell’s first acts in charge of the program was to hire Matt Mumme to the position of offensive coordinator. Mumme, who was previously head coach at Division III LaGrange, is a disciple of the air-raid offense, and expectations are he’ll look to establish that style with the Wolf Pack.

Look, non-conference games are fun because you get to learn a little bit about the team you’re facing. It gets old seeing the same old Iowa team year after year after year (did you know their visitor’s locker room is pink?).

Nevada probably won’t pose much of a challenge for the ‘Cats on Saturday, but at least now we all know a little bit more about the Biggest Little City in the World.