Everything* You Need To Know About: Bowling Green

Posted on September 13, 2017 by Austin Miller Leave a comment

Northwestern faces Bowling Green in their final non-conference test of 2017. With the Wildcats not having faced the Falcons since 2003, our Austin Miller tells you everything* you need to know about Bowling Green.

Nothing beats primetime football, am I right? Northwestern! Bowling Green! Under the Lights!

Sorry, I’m being informed that Bowling Green is 0-2, and coming off a loss to FCS South Dakota.

I am now being informed that the Bowling Green Quarterback completes 38 percent of his passes.

The old adage is that in order to beat your opponent, you must first know your opponent. With that in mind, let’s get to know the Bowling Green Falcons before they take the trip to Ryan Field this Saturday night.

Bowling Green State University is located in Bowling Green Ohio. Which is different than the Bowling Green in Kentucky. Yeah, that one. But, there is a connection between the two! Bowling Green, Ohio was named after Bowling Green Kentucky, by a “retired old postal worker who had once delivered mail there.” No, seriously, they let a retired mailman name the town. 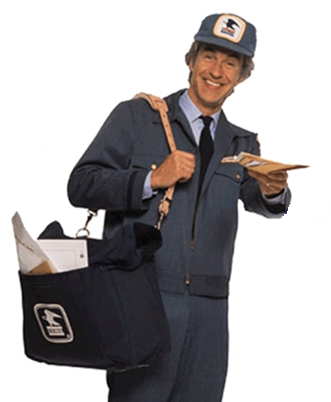 Note: Mailman pictured may not be same mailman that named Bowling Green.

By all accounts, Bowling Green appears to be your typical average, midwestern American city. Its population is a shade over 30,000, and the majority of the town revolves around the public university located there (more on them in a minute).

The year is 1910, and the Ohio Assembly has just passed the Lowry Normal School Bill. Governor Judson Harmon and company are seeking to expand the public university offerings in the state, and the committee have identified 4 spots for the next public university: Bowling Green, Fremont, Napoleon, and Van Wert. Unfortunately for Fremont and Napoleon, those two were axed before the final vote, Napoleon because it had too many saloons (the 1910’s everybody!), and Fremont due to some sort of stipulations from the President Rutherford B. Hayes Memorial Commission (I don’t know either). 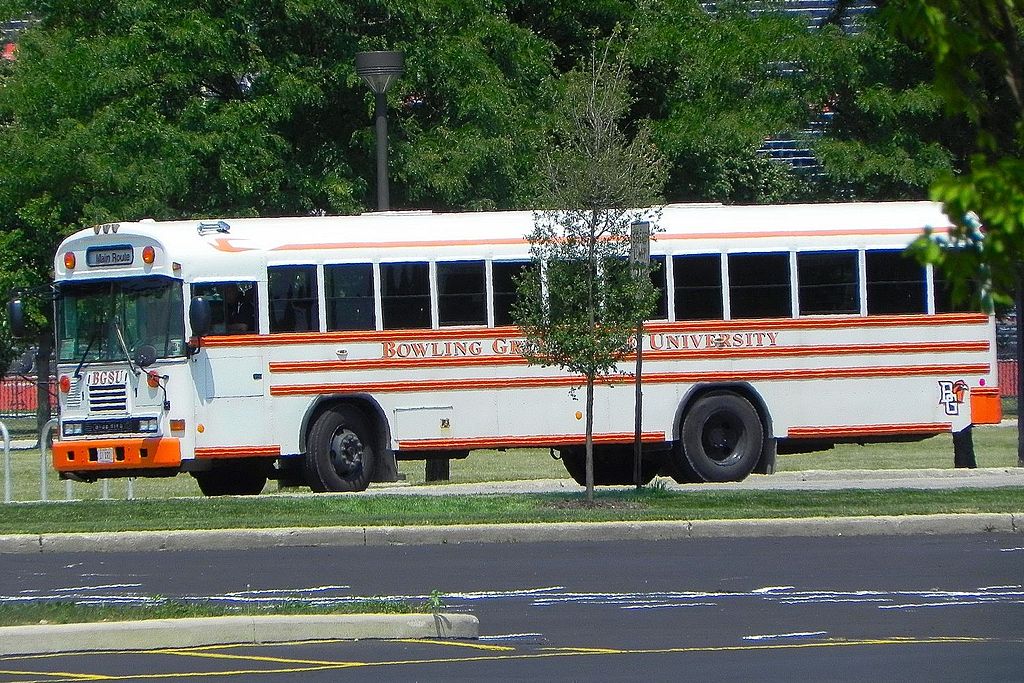 I needed a picture for this section but couldn’t find anything that related, so enjoy this bus!

By 1914, Bowling Green State Normal School had opened, and the rest is history. The university currently has an enrollment of 17,000, with just under 20 percent enrolled in the school of Education.

Before 1927, Bowling Green’s athletic teams were referred to as either the Normals or the Teachers. Then, in yet another example of journalists ruining everything, Ivan Lake (Bowling Green class of 1923 dontcha know!) then editor at the Sentinel Tribune, suggested naming the team the Falcons because it fit in the headline space. Seriously.

Bowling Green’s school colors are orange and brown, which are — not good! The story about how they got them? Even worse.

In 1914, Dr. L.L. Winslow, one of the members of the selection committee tasked with picking the school’s colors, was on a train to Toledo sitting behind a woman wearing a large hat adorned with orange and brown feathers. Winslow was such a fan, that he convinced the rest of the committee to choose orange and brown as the official colors. Seriously. You can’t make this stuff up.

The Falcons mascots are Freddie and Frieda, a couple of, get this, falcons. In keeping with other collegiate mascots, the identity of Freddie and Frieda is kept secret until a “beheading ceremony” (no, not that kind of beheading). After that, not only do their classmates know who they are, but so too does Wikipedia! That has to be the most well-kept mascot page on all of Wikipedia. 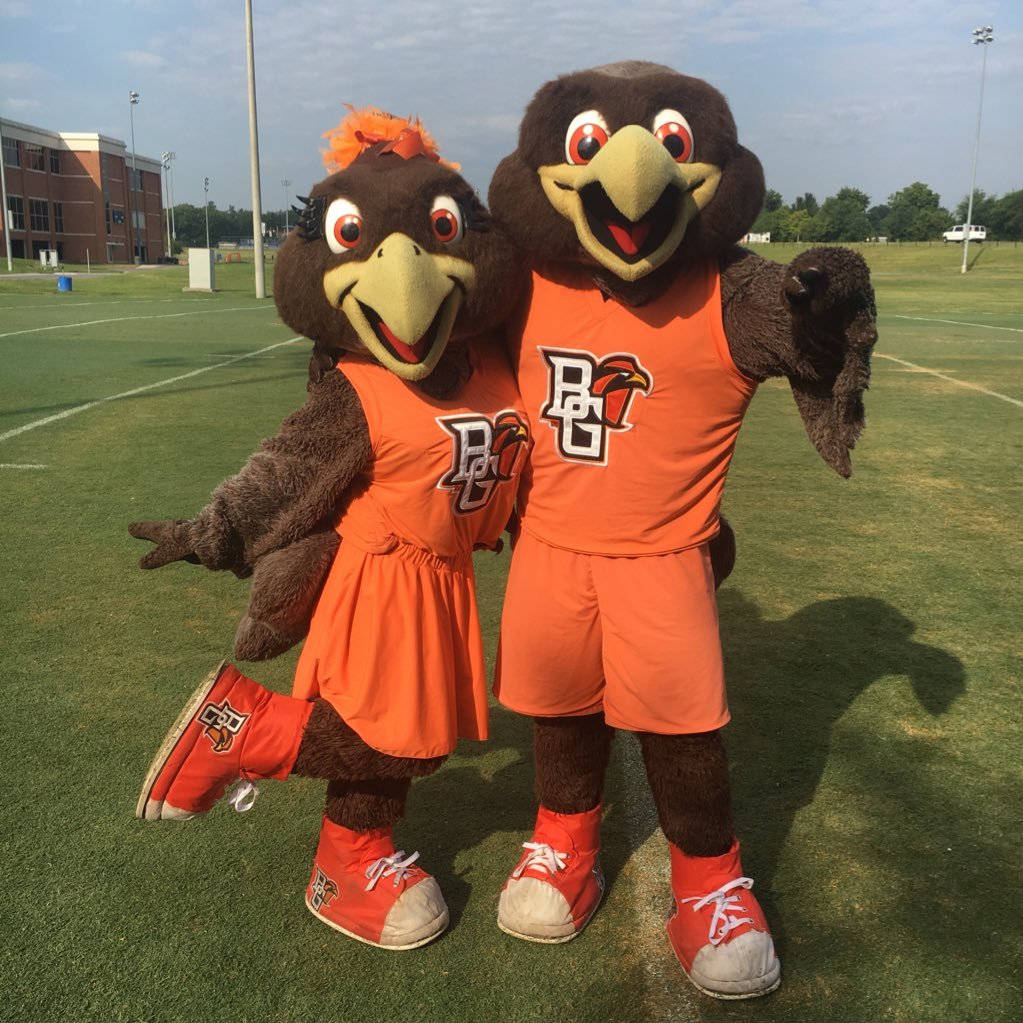 On the field, the Falcons have claimed one NCAA Title, 1984- Ice Hockey, when they defeated Minnesota-Duluth 5-4 in FOUR OVERTIMES (the longest game in NCAA Ice Hockey history).

FROM URBAN TO MIKE, WITH STOPS IN BETWEEN

Urban Meyer took over the Falcons football program in 2001, lasting two years, in which he went 17-6, before taking over Utah. Meyer was replaced by Gregg Brandon, who lost the 2003 MAC Championship before knocking off Northwestern in the 2003 Motor City Bowl, the last time the Wildcats and Falcons met. Brandon reached the 2004 GMAC Bowl, but the bottom fell out after that, with Brandon getting the sack in 2008. Apparently, when you don’t have Urban Meyer’s players, you’re not as good!

Which brings us to Mike Jinks! Jinks was hired from Texas Tech in 2016, leading Bowling Green to a 4-8 record in his first season in charge. Jinks’ Falcons are 0-2 in 2017, with a respectable loss to Michigan State and a, well, less than respectable loss to FCS South Dakota.

Look, Bowling Green is not good. Quarterback James Morgan is completing just 38.3% of his passes, and though the Falcons were picked third in the MAC East preseason poll, that 0-2 start has certainly soured things. Northwestern isn’t exactly world beaters either, but should comfortably defeat the Falcons on Saturday night, even if both Freddie and Frieda Falcon show up.