Posted on September 30, 2017 by Matt McHugh Leave a comment 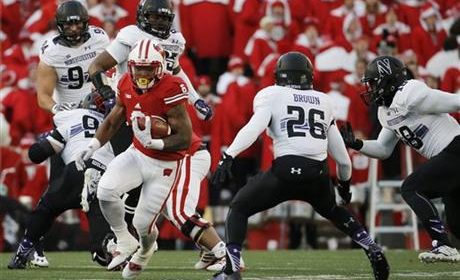 The Northwestern Wildcats were faced with a daunting task in their Big Ten opener, as they made the trip up to Madison to face the no. 10 ranked Wisconsin Badgers. Although the ‘Cats made some noise in the fourth quarter, they came up just short and fell 33-24 and dropped their record to 2-2 on the season. The Badgers improved to 4-0.

The game got off to a promising start for the Wildcats when star Wisconsin receiver Jazz Peavy fumbled on the first play from scrimmage. However, the Wildcats couldn’t fully capitalize on the opportunity and had to settle for a field goal from freshman kicker Charlie Kuhbander.

The Badgers responded later in the first quarter with a seven-play, 47-yard drive capped off by a seven-yard touchdown run by Jonathan Taylor.

In the 2nd quarter, the Wildcats forced a punt deep in Wisconsin’s own territory, and took advantage of the good field position to regain the lead. Clayton Thorson found Cameron Green in the end zone for Green’s first career touchdown.

Northwestern rode their strong defense for the rest of the first half, and took a 10-7 lead into halftime. They intercepted two passes and forced a fumble, while allowing just over 100 yards of total offense in the half.

But the second half spiraled out of control quickly for the Wildcats. On their first drive of the half, the Badgers completed a 61-yard pass, and capped off the drive with a Taylor touchdown run. The Badgers extended their lead to 21-10 on their subsequent drive.

On offense, the Wildcats punted on their first four drives, then Clayton Thorson threw a pick-six to give Wisconsin a 31-10 lead.

However, the Wildcats did not mail in the rest of the game, and put together their best drive of the game in the 4th quarter. Thorson completed six passes as the ‘Cats marched 75 yards down the field to score their second touchdown of the game as Thorson found Ramaud Bowman to cut the deficit to 31-17.

Later in the quarter, Thorson threw for 55 yards on his next drive and found Garrett Dickerson in the end zone for a five-yard touchdown.

The Wildcats were able to stop the Badgers and get the ball back with a chance to tie, however they were pinned back at their own one yard line with 1:09 on the game clock and just one timeout. On their second play of the drive, Thorson was sacked in the end zone for a safety, putting the game out of reach.

The Badgers out-gained the Wildcats 306 to 244 in total yards, but turned the ball over three times compared to just two for Northwestern.

The Wildcats return home next week to host no. 4 Penn State, while the Badgers head to Lincoln to play the Cornhuskers.