Posted on October 3, 2017 by Ben Krieger Leave a comment 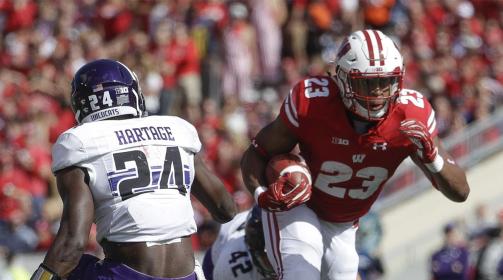 Last Saturday, Northwestern traveled up the lake to Madison to take on the 10th-ranked Wisconsin Badgers and came up short, falling by a score of 33-24. Northwestern had the lead at the halftime break but failed to counter Wisconsin’s halftime adjustments, getting outscored by twelve in the third and fourth quarters. After re-watching the tape from this upsetting loss, I saw three reasons why Northwestern was unable to repeat its 2015 success at Camp Randall Stadium.

Northwestern was simply dreadful on third down in this game. The Wildcats faced third down 15 times in the contest and only picked up a first down on three of those plays. Worst of all, the ‘Cats failed to pick up a first down on the drives following all three Wisconsin turnovers. While one of those drives ended in a field goal, three points off three turnovers is just not enough to beat a team as good as Wisconsin.

While the entirety of the offense struggled on Saturday, a closer look at the tape showed that the futility on third down began with the offensive line. Here’s a 3rd-and-1 for Northwestern following a Badgers’ turnover early in the second quarter:

This is a simple play call by the Wildcats: Give it to your best player in Justin Jackson (The Ball Carrier) and let him fight his way up the gut for the first down. What happens here, though, is the Northwestern offensive line gets abused by the Badgers defensive front. Three Wisconsin players end up in the backfield before Thorson has even finished handing the ball to Jackson. On most running plays, you want your blockers to get some forward push from the line of scrimmage, ideally giving your ball carrier 2-3 yards of turf before he is touched by the defense. On this play, Jackson is hit 2 yards behind the line of scrimmage, giving him little hope to pick up the first down.

Later in the same quarter, Northwestern intercepted Wisconsin quarterback Alex Hornibrook again, setting the Wildcats up on their own 31 with 1:47 to go in the half. Instead of operating a two-minute drill and extending their lead before the half, the ‘Cats went three-and-out again, not only giving up a chance to put more points on the board but also giving the Badgers enough time to start a drive of their own.

On this third down, Thorson makes a bad throw on the run. Regardless of the blocking that forced him into that situation, he had Wilson open and misfired. That said, the protection did break down alarmingly quickly, especially considering Wisconsin only rushed four players. When you face a big third down like this one and the defense drops seven defenders into coverage, you have to give your quarterback time to read through his progressions and find a hole in the defense. Northwestern’s inability to do so is what led to this incompletion (and the other 11 failed third down conversions).

We knew that the secondary had the potential to be excellent this season, with four experienced starters and talent throughout the depth chart. We were concerned when the news broke before week one that Keith Watkins II was out for the year. As the rest of Northwestern’s secondary seemed to get more and more injured, that concern grew. On Saturday, we got to see both sides of the coin. Northwestern looked excellent at times, intercepting Alex Hornibrook twice. At other times though, the Wildcats committed mental errors on the back end that resulted in Wisconsin’s biggest plays of the game.

Here’s one of the two interceptions by the Northwestern defense:

You can see right off the snap that all four Wisconsin receivers are blanketed by defenders. Seeing that and facing some pressure from the Wildcats’ front four, Hornibrook takes the deep shot, and JR Pace makes a great read and catch for the interception. Northwestern’s secondary at its finest.

While this play demonstrates how well the secondary can perform, the big plays given up in the second half simply proved too much for Northwestern to overcome.

This 61-yard completion to Quintez Cephus is a perfect example of a mental or communication error resulting in a big play for the opposition. Wisconsin does a great job selling the run for play-action, with a tight end pulling across the line and only two receivers releasing to run routes. The correct response by the defense would be for one safety to crash the box and the other to drop and prevent the deep ball. On this play, though, both Godwin Igwebuike (16) and Kyle Queiro (21) bite on the run, leaving Cephus a wide open seam in the middle of the field.

Later in the third quarter, Northwestern’s secondary gave up another big play due to a lack of focus. This time, tackling was the issue that plagued the secondary.

On this play, Northwestern has pretty solid zone coverage on Danny Davis III. Defensive back Trae Williams is giving him a few yards of cushion, and Igwebuike almost makes a diving play to break up the pass. Once Davis makes the reception, however, Northwestern suddenly is unable to bring him down. Williams doesn’t chop his steps and overruns the play, Kyle Queiro and Nate Hall trip over each other, Paddy Fisher and Montre Hartage both fail to wrap up, and Davis rumbles for 23 yards after the catch. It’s one thing if a player is just faster than you, but it’s another thing entirely if you can’t make tackles to prevent big plays. To beat an opponent as good as Wisconsin, the ‘Cats had to avoid making these kinds of errors.

Obviously bad luck is not the only reason Northwestern lost on Saturday. I don’t want to discount the grit of the Badgers or pretend that Wisconsin wasn’t the better team on the field. That said, going back through the tape revealed three plays that were either game-changing or potentially game-changing, none of which broke the Wildcats’ way.

The first play was on the kick following Northwestern’s field goal in the first quarter. After fielding the ball at the one-yard line, Wisconsin kick returner AJ Taylor got hit hard by Northwestern safety Jared McGee and lost the ball.

As you can see from this replay, Taylor is nowhere near down when the ball comes out, and the ball is loose on the ground for quite some time. Anytime you have a loose ball and a pile of bodies that big, it’s essentially a 50/50 chance as to which team will come away with it. Even worse, this fumble occurred at the Badgers’ 19-yard line. If this play ends with any of the five Wildcats holding the football, Northwestern would have gotten a possession starting inside the 20 already leading 3-0.

The same thing happened again later in the first half, when Wisconsin receiver Quintez Cephus took an end around handoff deep in his own territory.

Once again, Northwestern knocks the ball loose, and it turns into a dog pile to see who recovers the fumble. Just like the earlier fumble by Taylor, this one ends up in the arms of a Badger. Even worse, the field position for Northwestern would have been unbelievable had they been able to fall on the ball here. Forget Wisconsin territory, this would have been a goal-to-go situation for the Wildcats at a point in the game when they were trailing 7-3. If just one of the two toss-up fumbles mentioned here had gone Northwestern’s way, I could have been writing a very different article.

The last example of a brutal break for Northwestern happens to also be the play that realistically put the game out of reach: the Thorson pick six.

I recognize that a pick six is usually bad play as opposed to bad luck, and this is certainly a terrible decision and badly-thrown ball from Clayton Thorson. But in this case, the fact that it got returned for a touchdown took a very specific set of circumstances that were unlikely to all occur at once.

First, Thorson is hit as he released the ball, decreasing both the velocity and accuracy of the throw. It’s plausible that without the hit, Thorson’s pass simply falls incomplete instead of falling perfectly into the arms of Natrell Jamerson. From there, Jamerson has the interception and begins his return in the middle of the field, 36 yards from the end zone. He manages to shake a tackle attempt by Justin Jackson and tiptoe the sideline through traffic for the score. This was not simply a pass to the flat that got intercepted and taken to the house with ease. It was a terrific play no doubt, but the likelihood of those pieces all coming together is extremely low.

At the end of the day, Northwestern fought hard and came up short against Wisconsin. A little bit of bad luck along with abysmal offense on third down and mental errors on defense doomed a potential upset at Camp Randall.

vs. Michigan on Mixlr II.