Women’s basketball: What to watch in the upcoming season

Posted on October 5, 2017 by WNUR Sports Leave a comment 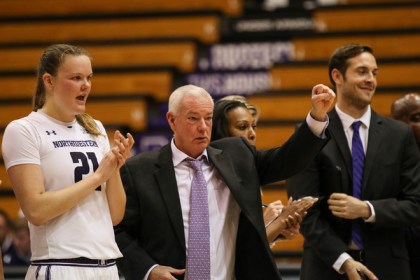 Finishing last year’s regular season at 20–11 overall and 8–8 in the Big Ten, the Northwestern University women’s basketball team is ready to take the next step in its quest for a big ten championship. Logging at least 20 or more wins in two of the past three seasons, Head Coach Joe McKeown and the Wildcats are poised to make their presence known and build off of their 78–73 victory over Iowa in the first round of the Big Ten Tournament a year ago.

In preparation for Northwestern’s first regular season game against Chicago State on November 10th, here is what to watch for this season.

Have no fear, the first-years are here

With ESPN ranking the Wildcats’ recruiting class as the 17th-best in the country, Northwestern landed four talented first-year guards in Lindsey Pulliam, Jordan Hamilton, Lauryn Satterwhite, and Brooke Pikiell. All of these players have the potential to make an impact in their first collegiate season.

Pulliam, who was ranked the No. 60 recruit on ESPN’s 2017 top-100 list, adds versatility to the Wildcats’ offense. A top-tier scorer who has the ability to pass skillfully in transition, the 5-foot-10 guard was named to the 2015-2016 ALL-USA Maryland Girls Basketball First Team by USA Today High School Sports and previously was selected as the Montgomery Private Schools Player of the Year.

Tabbed as the No. 95 recruit on ESPN’s 2017 top-100 list, Jordan Hamilton is another talented guard ready to contribute for the Wildcats. She adds speed to Northwestern’s backcourt who also has effective mid-range shooting skills. Playing at Frisco Liberty High School in Frisco, Texas, she was named to the Dallas Morning News All-Area Second Team and was previously selected to the All-Area and All-State teams.

Satterwhite, who played at Valley Vista High School and is a native of Avondale, Ariz., provides athleticism on the dribble with the ability to shoot well from beyond the arc. Averaging 15.6 points per game during her sophomore year, she led her team to a State Championship in 2014 and a State Final Four appearance in 2015.

Playing at Rutgers Prep in Far Hills, N.J., Pikiell is the daughter of Rutgers University men’s basketball Head Coach Steve Pikiell. She helped guide her team to win the Nonpublic B State Championship and the Somerset County Championship.

Losing all five starters from last year’s team, Northwestern’s starting lineup will differ significantly from previous seasons. Without Nia Coffey, the program’s second-leading career scorer with 2,287 total points and four-time All-Big Ten First Team selection, Northwestern will have to find another go-to scorer. Coffey led Northwestern last year with 20 points per game and was drafted fifth overall in the 2017 WNBA Draft by the San Antonio Stars.

The Wildcats will also have to replace Christen Inman, who was the team’s second-leading scorer with 11.6 points per game along with key contributing rebounder Lauren Douglas. Additionally, Ashley Deary’s point guard skills will be missed, as she lead the team with 198 assists last season.

Given the young roster, the Wildcats will rely on their only two seniors, Lydia Rohde and Oceana Hamilton, to help provide leadership and experience.

After missing the entire month of January due to injury, Rohde made 14 starts and played in 21 games last year. The 5-foot-10 senior guard averaged 4.7 points per game and 23.1 minutes. In her three years on the hardwood with the Wildcats, Rohde has played in 73 contests, making 20 starts. She was named a 2016 Academic All-Big Ten selection.

Oceana Hamilton received substantial playing time a year ago, starting 14 contests and appearing in 27 games. She tallied 51 total rebounds and made 14 blocks. A transfer from Alabama, she played in 46 games over her first two collegiate seasons. With the Crimson Tide, she scored 94 total points and recorded 38 blocks.

The Wildcats have another pair of notable returners in junior Amber Jamison and sophomore Abi Scheid. Both players earned significant minutes in Big Ten play, and should be called upon as key contributors this season.