Posted on October 6, 2017 by WNUR Sports Leave a comment

Each week, the WNUR staff will submit their predictions for Saturday’s football game. Over the rest of the quarter, we’ll keep track of each picker’s record.

Penn State is really good. At everything. ‘Cats are gonna have to have everything go right to have a fighting chance.

Player to watch: Jeremy Larkin, RB, Northwestern. With JJ banged up, Larkin is going to be called upon to make some plays in space. He’s shown some flashes to start the season, and could be a key member of the offense.
Jack McKessy (@YeaMcKess): Penn State 38, Northwestern 17
Penn St is very good at the football this year, and Northwestern is just sorta mediocre.
Player to watch: Saquon Barkley, RB, Penn State. Obviously. Early top Heisman candidate.
Amit Mallik (@amitkmallik): Northwestern 31, Penn State 20
The ‘Cats grind out a tough early conference victory behind a dominant run game, and a defense up to the task.
Player to watch: Paddy Fisher, LB, Northwestern. Fisher and the rest of the linebackers will be tasked with stopping Saquon Barkley. Either they make plays when he gets through the line, or the Wildcats get trampled by the best player in the country.
Willie the Wildcat (@WillieWildcatNU): Northwestern 24, Penn State 7
The #B1GCats are going to the Rose Bowl this year so they going to win.
Player to watch: Watch out for every wildcat player cuz the #B1GCats are one B1G, lean, well-oiled, purple machine.

Northwestern’s run defense limited a top-tier Wisconsin ground game to just 109 yards on Saturday, but Saquon Barkley is a different type of player. He has a boatload of receiving yards (386) as well as rushing yards (574) and I think that’s where he hurts Northwestern the most.
Player to watch: Paddy Fisher, LB, Northwestern. Fisher has been Northwestern’s leading tackler, and at the middle linebacker position, he’ll be vital against a player like Barkley and a mobile QB like Trace McSorley.
Dan Rosenzweig-Ziff: Penn State 35, Northwestern 20
Let’s face it, Northwestern put up a nice fight at the end of the Wisconsin game, but Penn State is playing on another level right now, with a future pro lighting it up in their backfield. The best Northwestern can hope for in a game like this is to try to get Clayton Thorston and Justin Jackson some momentum going into the rest of the season.
Player to watch: Godwin Igwebuike, Safety, Northwestern. The senior safety will look to build on his performance last week that included an interception, his first on the season.

Don’t tell me “Darren, you were right” after the game. Just smile and give me a fist bump. I’m taking the ‘Cats in a thrilling upset. With homecoming intensity and a team that proved it can hang with Wisconsin, I’m picking the #B1GCats.
Player to Watch: Jeremy Larkin, RB, Northwestern. Given the injury to starting running back Justin Jackson and his ability to play through the pain against Wisconsin, I’m not sure if he is 100% this week either. Change-of-pace running back Jeremy Larkin will get more playing time than we expect and will make big plays. He will put together 75 total yards from scrimmage and will score a crucial touchdown in the fourth quarter.

Heck yeah I’m picking the cats! Okay, I know it’s a long shot, but here’s how they do it. After the Wisconsin game, coach Fitzgerald emphasized the lack of points off turnovers, if NU got 14 points on 3 turnovers as opposed to 3 points, they win the game. How are they gonna get turnovers this time? Alex Hornibrook, who NU picked off twice, had only 1 INT in the 3 games prior (.33 a game), while PSU QB Trace McSorely had 4 INTs in 5 games prior to this one (.8 a game) and he’s going in to a LOUD Ryan Field. I’ve already gone over my word limit, but also think about how PSU has played 6 straight, Saquon Barkley is getting pretty tired (56 yards against IU), and coach Fitz has James Franklin’s number.

Player(s) to watch: Kyle Quiero and Godwin Iguebuke, safety, Northwestern. The Northwestern secondary will tell the story of the game. If the NU secondary can avoid giving up pick plays to State receivers, and get some turnovers, the Wildcats can have a chance.

And when in doubt…

Penn State is 5th in the nation in tackles for loss and 33rd in sacks, while Northwestern is 109th in tackles for loss allowed and 124th in sacks allowed (all stats per game). We may see the ‘Cats go backward as often as they go forward.
Player to watch: DaeSean Hamilton, WR, Penn State. Last weekend, the Hoosiers held Saquon Barkley to just 56 yards on 20 carries and no rushing or receiving touchdowns (though he did have a kick return and a pass for TDs) but still gave up 45 points, largely thanks to Hamilton and his 9 receptions for 122 yards and 3 TDs. Even if the Wildcats can neutralize Barkley, they’ll still have to find keep Hamilton on lockdown if they want a chance at pulling off an upset.

Northwestern finally makes some adjustments to alleviate the offensive line struggles, running outside the tackles and rolling Thorson out of the pocket more often. Realizing that the dink and dunk attack hasn’t worked, Clayton Thorson finally unleashes a taste of the vertical passing attack and has a big day, while Northwestern’s defense forces the Nittany Lions to take a field goal just enough times to get the win.
Player to watch: Paddy Fisher, LB, Northwestern. Fisher has done a pretty good job this year taking over for Anthony Walker, Jr. at inside linebacker, but Saturday will be the toughest test he’s faced. Saquon Barkley is a force of nature in the backfield for Penn State, and containing the future top-5 draft pick will be priority one for the Wildcats. If Fisher has a good game and the ‘Cats can keep Barkley around 4 yards per carry (he averages 6.7 this year), Northwestern has a chance to win.
Kevin Sweeney: Penn State 27, Northwestern 21
The ‘Cats hang tough and give Penn State a scare, but the Saquon Barkey-led Nittany Lions hang onto their undefeated season with a late score. NU will have to keep the big-play PSU offense at bay and protect Clayton Thorson if they are to pull the upset.
Player to Watch: Trace McSorley, QB, Penn State. Much will be made about the Heisman frontrunner in Barkley coming to town, but McSorley is terrific in his own right. He has the ability to beat you with both his arm and his legs, and throws one of the better deep balls in college football. Those deep shots should pose a stiff challenge to a Northwestern secondary unit that has struggled this season.
Ari Levin: Penn State 42, Northwestern 24
In what promises to be a shootout, Northwestern will struggle to keep up with Penn State’s high-powered offense.  It will take an enormous step-up in Northwestern’s secondary, or an amazing performance from Thorson to keep the game close.
Player to watch: Saquon Barkley, RB, Penn State. A Heisman candidate, Barkley will almost surely control the pace in this game.  Plus, he’s quite a joy to watch.
Austin Miller (@austin_james906): Northwestern: 34, Penn State: 10
Nittany Lions aren’t even real things. Happy Homecoming everybody.
Player To Watch: Nittany Lion Mascot 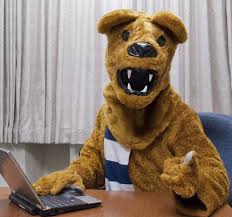 Worst Mascot in the Big Ten