Posted on October 20, 2017 by WNUR Sports Leave a comment 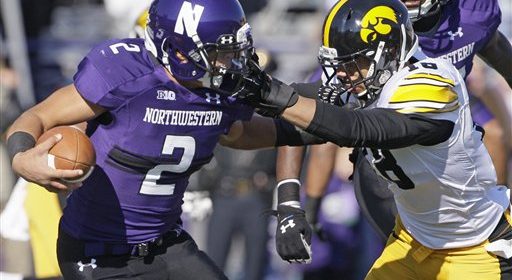 Each week, the WNUR staff will submit their predictions for Saturday’s football game. Over the rest of the quarter, we’ll keep track of each picker’s record.

Classic B1G grind-it-out kind of ball game…’Cats offense was clicking last week and they can put enough solid drives together to pull out a big home win.
Player to watch: Riley Lees, WR, Northwestern: The redshirt-freshman has worked his way up the depth chart and should play a big role in the offense again this week. Also, keep an eye out for his speed on special teams.

Iowa’s defense is slightly better than Maryland’s, but that doesn’t say much. Northwestern can put up (just) enough points to take the W.
Player to watch: Garrett Dickerson (or Cam Green), Superback, Northwestern: In a potentially slow-moving game, Thorson’s safety blanket’s will play a major role. Green did an excellent job a week ago in place of the injured Dickerson.
Amit Mallik (@amitkmallik): Northwestern 31, Iowa 20.

The ‘Cats grind out a tough conference victory behind a dominant run game and a defense up to the task.

Player to watch: Clayton Thorson, QB, Northwestern: Thorson has excelled against mediocre defenses this season, but floundered against better units. He needs to deliver an impressive outing against Josey Jewell and company to lead the same kind of resurgence the offense experienced last year.

Northwestern continues to build on the positives from the Maryland game, finally getting back above .500 on the year. Justin Jackson continues to separate himself from every other running back in Northwestern history, and the Wildcats’ defense shuts down Iowa at Ryan Field.

Player to watch: Clayton Thorson, QB, Northwestern. Thorson looked terrible against Wisconsin and Penn State but played much better against a weaker opponent in Maryland. Iowa falls much closer to Maryland on the talent scale, meaning Thorson should be able to find some sort of a rhythm. That said, the Hawkeyes are never an easy team to beat, and Thorson will have to play well or the Wildcats may suffer another embarrassing loss like the one to Duke.

Northwestern will continue to find a rhythm offensively en route to winning a close game over Iowa. Clayton Thorson will have his best game in Big Ten play yet against an Iowa pass defense that allows 242.7 passing yards per game, the third-most in the Big Ten.
Player to watch: Macan Wilson, WR, Northwestern. Wilson led all Northwestern receivers last week in the win over Maryland with 74 receiving yards on five catches. Look for Wilson to continue to stretch the field and make big plays for the ‘Cats.

Rather than bore you with a vanilla football guys prediction, instead enjoy a game-day poem:

The B1GCATS are back at Ryan Field

Where the purple & white will not yield!

Northwestern welcomes the Hawkeyes to town

And we know the black & gold are going down!

Look for Thorson to Skowronek through the air

Giving Jewell & the Iowa D more than a scare,

We know Ferentz is trying to avenge last year’s loss

Too bad Fitz and company will remain Kirk’s boss.

His latest record the most to note

Iowa’s defense may be stout

But obviously NU wins in a rout!