Men’s Basketball Kicks Off Season With Purple and White Scrimmage

Posted on October 21, 2017 by WNUR Sports Leave a comment 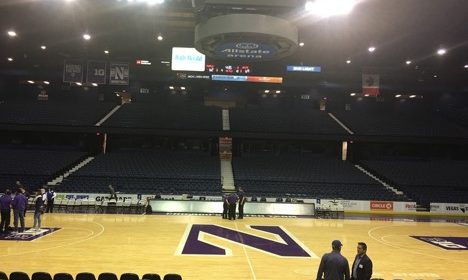 The Northwestern men’s basketball team gave fans their first glimpse of what’s to come on Friday night with the Purple and White Scrimmage at Allstate Arena in Rosemont.

The team treated fans who made the trip (which took just under an hour on the student shuttle) to a high-intensity 32-minute matchup followed by a chance to meet the players and get autographs. The White team, which featured the senior trio of Bryant McIntosh, Scottie Lindsey, and Gavin Skelly, claimed a 69-62 victory over Purple. Lindsey posted 22 points on 7-12 shooting to lead all scorers, while freshman guard Anthony Gaines impressed for Purple with 21 points.

Overall, it was a positive night for ‘Cats fans, who got a chance to experience Allstate for the first time. The newcomers in Gaines and Boston College transfer A.J. Turner each shined, with Gaines the best player on the floor for some stretches and Turner posting 12 points on 3-6 from downtown. Redshirt freshman Rapolas Ivanauskas, who missed last season due to injury, did the dirty work and drained a 3 in his 15 minutes of work.

Everyone except sophomore guard Isiah Brown, who sat on the sidelines in street clothes, got into the game. Junior forward Vic Law shined during his time on the floor, but limped off the court at the end of the half. After receiving treatment on his right foot/ankle, he returned to action before limping off again. However, his departure seemed more precautionary than anything else.

“We need to do everything in our power to make this a great home court”, Northwestern head coach Chris Collins said to fans pregame as he thanked them for coming. “You guys are some of our best supporters, family, and friends, and we really appreciate everybody.”

Overall, Gaines definitely made the biggest impression, getting to the rim at will as he used his strong 6-4 frame to create space. If tonight’s performance was any indication, Collins and his staff may have found an outstanding piece for the future in the form of the 3-Star guard from Kingston, NY.

McIntosh posted 12 second-half points en route to 17 in the game for the White team, while Dererk Pardon poured in 17 points and 9 rebounds for Purple.

The ‘Cats open the regular season November 10 at Allstate Arena against Loyola (MD).