Posted on November 10, 2017 by Will Greer Leave a comment 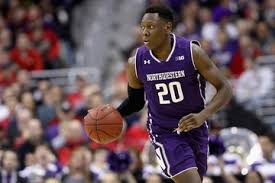 The 2017-18 Northwestern men’s basketball season kicked off tonight in thrilling fashion. Northwestern defeated Loyola (MD) in a 79-75 affair that was, at times, too close for comfort.

Last year was a Cinderella year for the Northwestern Wildcats, who finished a 23-11 season with a run to the NCAA tournament’s round of 32.

But tonight was a good reminder of how quickly a new season’s page can be turned.

It was a tale of two halves for the Wildcats against the Greyhounds, who are fresh off a seventh-place finish in the Patriot League. Northwestern kept the good times from last year rolling with a hot start in the first half. Scottie Lindsey led the way for the Wildcats with 14 points at halftime. He finished with 26 points and 9 rebounds. Bryant McIntosh tallied 16 points, 4 rebounds, and 7 assists in total.

But after Northwestern dominated the first 20 minutes en route to a 37-24 lead, the second half was a different story. In a sloppy game with nine travels called, four separate Northwestern players committed 4 fouls. Loyola (MD) closed a 13-point halftime lead during the second frame thanks to lights-out shooting by Andrew Kostecka, who finished with three 3-pointers and 22 points. The Greyhounds led 66-65 with just over four minutes remaining before Northwestern closed the game on a 14-9 run.

Northwestern’s shooting was, bluntly, not great in this game. As a team the Wildcats shot 41 percent t, were 5-21 from three-land, and just under 65 percent from the free-throw line. Streaky shooting was the story of last season for Chris Collins’ team, and that was on display tonight at Allstate Arena.

Northwestern will host Saint Peter’s this Monday as they try to go 2-0 on the year after a tight contest with Loyola (MD). You can listen to the game on WNUR Sports, 89.3 FM.