Posted on November 16, 2017 by Henrique DaMour Leave a comment 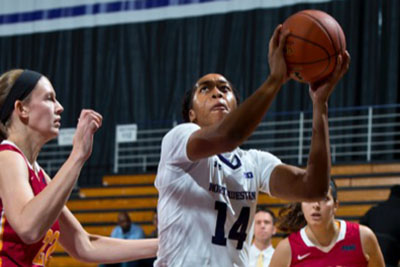 In their first true home game at historic Beardsley Gym in the 2017-18 season, the Northwestern Wildcats (2-0) took down the Oakland University Golden Grizzlies (1-1) by a score of 88-70.

Pallas Kunaiyi-Akpanah and Abi Scheid led the way for the Wildcats, who used fast-paced offense and abused their size advantage on the glass, and down low in general to never allow really Oakland to come close to retaking a lead in the game other than the 3-2 one they held in the first minute of the game. Kunaiyi-Akpanah dominated from early on en route to almost out-rebounding the entire Oakland Golden Grizzlies squad, 21-24, while also tallying 27 points on 12-20 shooting.

A fast-paced affair from early on saw lots of fast breaks and some poor defense by Northwestern, bailed out by missed open shots from Oakland and absolutely unconscious shooting from the Wildcat offense. By the end of the first quarter, Northwestern outshot Oakland, hitting 68.8% from the floor compared to just 28.6% for the Golden Grizzlies.

Kunaiyi-Akpanah asserted her dominance in the paint on both ends of the floor, bullying undersized Oakland players as an anchor in the 2-3 zone for Northwestern. Her phenomenal presence in the post led to 12 second-chance points for Northwestern compared to just three for Oakland.

The Golden Grizzlies came out firing in the second half, playing with an increased aggression, able to force a few more contested shots on defense and knock down more open looks. Only issue for Oakland was that Northwestern’s offense, led by Kunaiyi-Akpanah’s 20-20 game, only slightly regressed to the mean. To the Golden Grizzlies’ credit, they forced some sloppy passes by the Wildcats as they responded to Oakland’s full-court press by attacking it full-force and pushing the tempo right from the inbound pass. Oakland scored 26 of their 70 points off 20 Northwestern turnovers.

The fourth quarter was a little close for comfort initially, as Northwestern looked gassed compared to the Golden Grizzlies’ up-tempo offense. A lead that was as big as 20 in favor of the Wildcats with 3:05 left in the third quarter dwindled at Oakland went on a 20-7 run in a matter of 5:45 to pull within seven. For Oakland, it came down to Sha’Keya Graves and Taylor Jones penetrating a Wildcat defense out of sorts and not able to get back quickly enough to cover Oakland effectively in transition.

After a Jones three-pointer with 7:20 left in the game, however, Oakland’s offense went ice-cold again, scoring just eight points the rest of the game, allowing Northwestern to pull away, wrapping up the ballgame on a 19-8 run. The full-court press by Oakland was also abandoned late.

The Wildcats travel to Tennessee to take on UT-Martin on Saturday as they look to improve to 3-0 on the season. Tip-off is scheduled for 2 p.m. CT.