Posted on November 16, 2017 by Matt McHugh Leave a comment 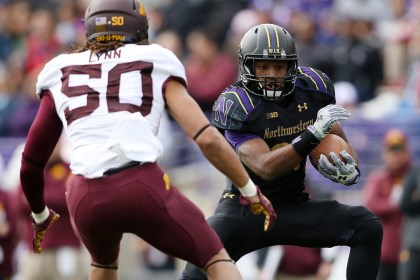 The Wildcats play host to the Minnesota Golden Gophers on Saturday at Ryan Field, and they will try to extend their winning streak to six games. Last year, the Wildcats lost 29-12 in Minnesota. The Wildcats won their last meeting in Evanston, topping Minnesota 27-0 in 2015. Here are three keys to this year’s matchup, which kicks off at 11 a.m. CT Saturday.

However, Northwestern’s defense has shown the ability to shut down big runners all year long. Last week, they held Purdue to just 40 yards on 22 carries, and they’ve allowed the 2nd-fewest rushing yards in the Big Ten this season. As long as their run defense plays at that same level, the defense should be in good shape against the Golden Gophers this week.

Since taking over the starting quarterback job, sophomore Demry Croft has struggled with the passing aspects of the job, but went off last week for 183 rushing yards and three touchdowns against Nebraska. Croft has completed just 45.1 percent of his passes, and hasn’t thrown for over 163 yards in any game this season. The Wildcats should commit the majority of their defense to defending the run, and dare Croft to beat them through the air.

The Wildcats struggled with their rushing attack all game against Purdue last week. Justin Jackson carried the ball 25 times for 46 yards, largely because Purdue stacked the box almost every down. This week, Minnesota will most likely play to their strengths, trusting their pass defense (3rd-fewest yards allowed in the Big Ten) over their mediocre rushing defense. If they follow that gameplan, the Wildcats can go back to their ground-and-pound attack and try to win the game by running the ball down their throat.s