Posted on January 30, 2018 by WNUR Sports Leave a comment

This is my fourth year doing bracketology, and I don’t recall ever having to make a decision that tormented me like the one I had to make today. With the NCAA adding new data to team sheets, there are even more numbers to parse through, more stats to either take into account or reject entirely, more figures to juggle.

On some days, there’s a clear top 68, and no difficult decisions need to be made. Today was not one of those days. No, today there was a clear top 67, which is hell on earth for a bracketologist. It feels like whatever the lady in this scene is feeling, if you assume the dialogue is Portuguese for “Houston has a bad non-conference schedule, but South Carolina is 12-8” or“prediction-based metrics say Houston is by far the better team but don’t let that distract you from the fact that they lost to Drexel in November.”

I went back and forth between the Cougars and the Gamecocks several times If you want to see their resumes for yourself and draw your own conclusion, compare pages 48 and 53 of this PDF. Pay close attention to the new metrics in the upper-left hand corner; they complicate matters tremendously.

Ultimately, I was unable to come to a decision of my own and decided to follow the crowd. The 68th and final spot was awarded based on a general consensus among bracketologists over at the Bracket Matrix, which you can consult to see how my projections stack up against others. Am I better at this than Joe Lunardi? We’ll see what the matrix says come Selection Sunday.

And now, the projections…after the usual disclaimers: 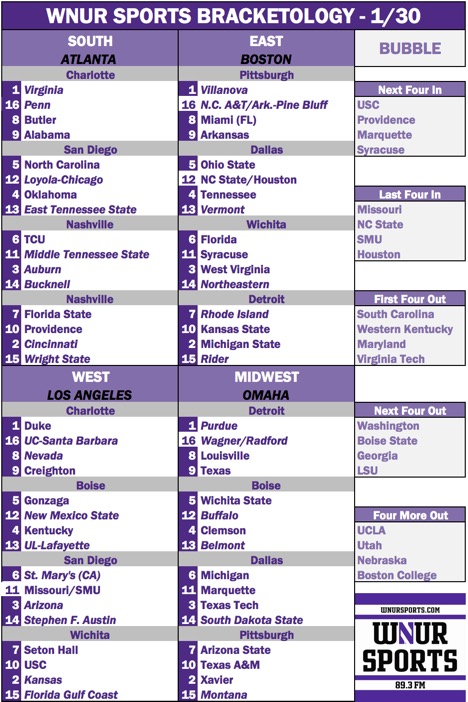