Posted on February 6, 2018 by WNUR Sports Leave a comment

The past few days of college basketball have answered a lot of bracketology questions.

Are computer metrics (BPI, KenPom, Sagarin) way too harsh on Washington? Yes! Is Western Kentucky a legitimate contender for an at-large bid? No! Which orange team deserves to be a 3-seed more: Clemson or Tennessee? Who cares, they both deserve it more than Arizona!

But one question which has persisted for the past three weeks continues to loom large: What will the committee do with Boise State? The Broncos are 18-4 and 37th in RPI, but they’re 117th in strength of schedule and lack any good wins. Computer metrics don’t make a strong case for or against the Broncos. So what do we do?

Many have jumped on the blue bandwagon, including Joe Lunardi. I desperately would like to join them, but the Broncos have to prove they have what it takes to win me over in a bubble battle. Ultimately, I narrowed the bubble down to 5 teams that could win the final at-large bid: Boise State, Georgia, Marquette, SMU, and UCLA.

34 other bracketologists released new projections for February 5th in the Bracket Matrix. The number of bracketologists who had each of those teams in the tournament is as follows:

The crowd says Boise State. I followed the crowd last week, and that worked out pretty well. But the crowd is wrong this week.

First, I had to eliminate my beloved UCLA Bruins. Now that the committee has specified that road games are more important this season, UCLA’s 1-4 road record, with the lone win coming at Cal, isn’t going to cut it. SMU gets tossed next, since their resume doesn’t account for the loss of Jarrey Foster for the season (knee injury).

Based on the Bracket Matrix, the choice between Boise State, Georgia, and Marquette is an obvious one. However, it is a choice I cannot make. The Broncos’ two best wins are a 32-point home victory over Loyola-Chicago and a win at Oregon which sanpped the Ducks’ 46-game home winning streak. It seemed a lot more impressive at the time than it does now, but it still makes for a great highlight.

It’s almost impossible to resist a mid-major with just 4 losses and a starter named Lexus. Almost being the operative word here. The Broncos are going to have to win against Nevada on Valentine’s Day for me to award them at-large bid. Everything else is small potatoes.

And then there were two––Marquette and Georgia. Marquette is probably the better team. However, the Golden Eagles and the Bulldogs played each other earlier this season. In Marquette. Georgia won. *sigh*

Oh, and none of it even matters because Syracuse just beat Louisville on the road and is probably coming for that 68th spot in the next update. As March nears with every second, the madness rages on.

And now, the projections…after the usual disclaimers: 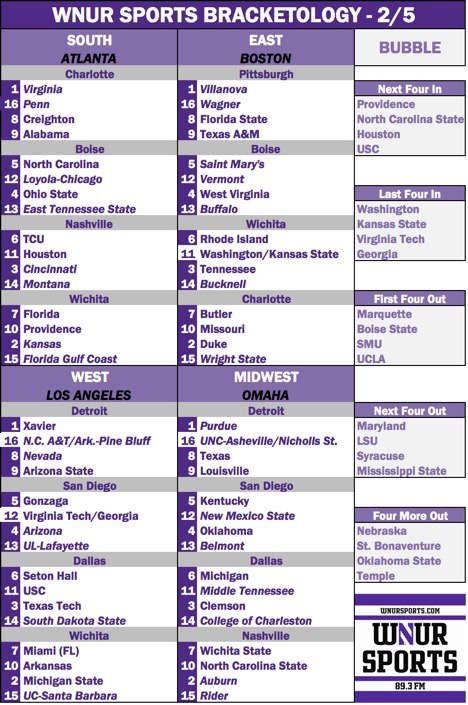