WNUR Bracketology: Week 4 – Back to Square One

Posted on February 13, 2018 by Matt McHugh Leave a comment

Now that the selection committee has released a preview bracket, we have a bit more insight into what really matters come Selection Sunday. Having learned what the committee prioritizes, I had to start from scratch this week.

Up until now, I had taken the projections from week 1 and adjusted them each week according to how each team performed over the previous seven days. You may have noticed that it was quite rare for me to move a team up seed after going 0-2 since the previous bracketology column, or down a seed after going 2-0.

It is now apparent that the week 1 projections served as an unrealistic baseline––I can’t move Michigan State down from a 2-seed to a 3-seed after beating Purdue––so I began again, making a new, more realistic baseline that aligns with the committees’ priorities, which I have inferred from analyzing the preview bracket and watching Andy Katz’s interview with this year’s selection committee chairman, Bruce Rasmussen.

This was all a very time-intensive process, so this week’s column is a bit of an express version. Hope you like bullet points!

OBSERVATION #2: No recency bias. November results matter just as much as February results.

OBSERVATION #3: Margin of defeat does not matter*. Rasmussen outright said this in reference to Tennessee’s loss to Alabama. *-The committee does make note if a game went to overtime, however.

And now, the projections, after these friendly reminders: 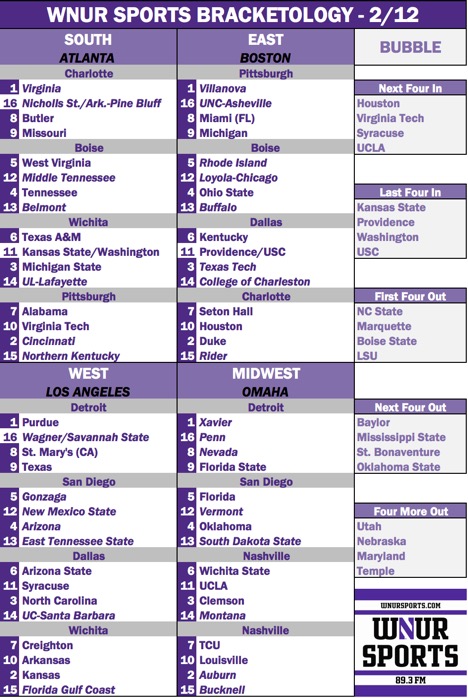