Posted on February 19, 2018 by WNUR Sports Leave a comment

Every week, the college basketball slate features a few matchups that are especially crucial for bracketologists, and they’re not the games you’d expect.  If the right team wins, my job becomes much easier. If the wrong team wins, my job gets even more difficult.

In these pivotal showdowns, one team is on the outer edge of the bubble, hanging on for dear life, and the other team is in the field and on the boundary between seed lines. If the bubble team loses, their at-large hopes will surely vanish, and their opponents will either solidify their spot on their current seed line or waltz into a higher seed line. But the bubble team wins, they have to be seriously considered for an at-large bid, and their opponents fall from their seed line, leaving a vacancy which has to be filled.

Any given week usually yields a fairly even mix of good and bad results in these showdowns. On Wednesday, for example, Georgia won in Florida to force the Gators off the 5-line, but at least Nevada killed off Boise State.

This past weekend, however…this past weekend was a nightmare. Almost everything that could have gone wrong, did. Auburn was Purdue’s obvious replacement for the fourth 1-seed, until they lost to South Carolina; Texas Tech was destined for the fourth 2-seed, then lost to Baylor; Marquette could have been dead in the water, but instead notched their biggest win of the year at Creighton. LSU-Mizzou, Georgia-Tennessee, Syracuse-Miami, bad result after bad result.

But nothing was more destructive than what transpired in Olean last Friday night. The last 4-seed was Rhode Island’s for the taking––Oklahoma lost earlier in the week, and West Virginia would have to win in Kansas to jump the rams. Chair of the selection committee Bruce Rasmussen had already said that the committee “feels very strongly about the caliber of Rhode Island.” All they had to do was grab a Q1 win at St. Bonaventure and they were set. But then, college basketball happened. St. Bonaventure won, improved to 20-6 on the year, kept their at-large hopes alive, and created a power vaccuum on the 4-line. Chaos.

Now, most people are high on the Bonnies and have them pencilled in the field. It’s a trap. Don’t fall for it like I did two years ago.

It was March 13th, 2016––Selection Sunday, the bracketologist’s day of judgment. The Bonnies were 30th in RPI despite being 82nd in strength of schedule, went 22-8 overall and 3-2 vs the RPI top 50. Their leading scorer was Marcus Posley, a guy who had dropped 47 on St. Joe’s 11 days earlier. He was destined to shine in the Big Dance. And then the Bonnies were snubbed. I was FURIOUS. TULSA? How could the committee pick Tulsa?! I abandoned my entire project of finding a formula to predict what the committee would do. I took the next season off.

It’s a pretty classic Jake thing to be upset about, but I’m still HEATED about the utter travesty the committee unleashed on St. Bonaventure

Bracket Matrix updated to include 80 brackets. 0 had Tulsa. 71 had St. Bonaventure

Now, I have returned. I am older, wiser, and will not be fooled again by the Bonnies. The committee may be different now than it was 2 years ago, but I cannot help but recall my scarring experience. Now, the Bonnies are 27th in RPI despite being 88th in strength of schedule; they’re 20-6 overall and 3-2 in Q1 games; their leading scorer is Jaylen Adams, a guy who dropped 44 on Saint Louis 11 days ago. He’s destined to shine in the Big Dance. But destiny may have other plans for a team with losses against Niagara and St. Joe’s.

That’s enough reminiscing for now. Here’s the bracket, after the usual disclaimers: 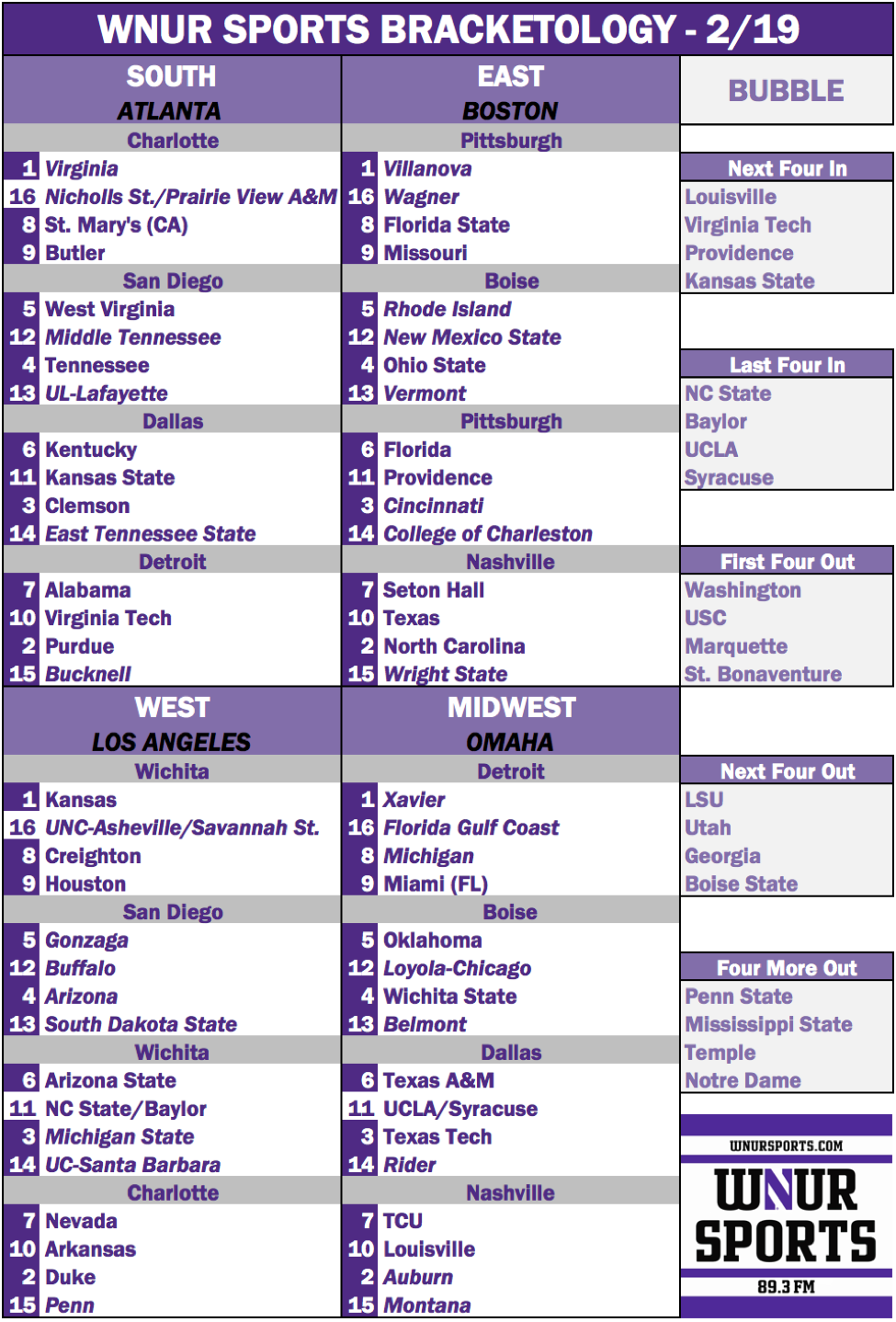