After Losing Lathon, What Options Does Northwestern Have at Point Guard? 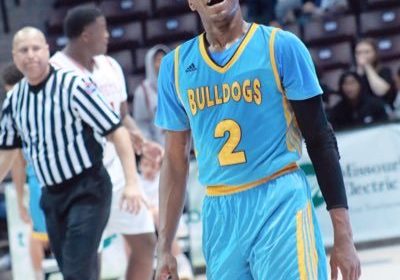 Northwestern Men’s Basketball’s prized 2018 recruiting class lost one of its headliners on Friday, when Inside NU reported that point guard signee Jordan Lathon’s admission to the university had been revoked. Lathon later released a statement on his Twitter page confirming that he would not be attending Northwestern.

It’s unclear at this time what caused Lathon’s admission to be revoked, but the news comes at a strange time. The four-star prospect first committed to Northwestern back in June of 2017 and signed his Letter of Intent in November.  He originally planned on spending his senior season at IMG Academy in Florida, but decided to return to his hometown of Grandview, Missouri for family reasons. Lathon went on to have an extremely successful senior campaign at Grandview HS, averaging 12.9 points, 6.7 rebounds, and 7.0 assists while winning a state championship.

And while Lathon is already in the process of finding a new place to play college basketball (Jake Weingarten of StockRisers.com reported last night that Lathon received an offer from Oklahoma State), Chris Collins is now tasked with finding immediate help at the point guard spot. Lathon was seen by most people around the program as the point guard of the future for the Wildcats. With Collins and his staff losing potential South Dakota grad transfer guard Matt Mooney to Texas Tech, it appeared Lathon would start from day one in Evanston. Now, with most top players for the 2018 class off the board, Collins will have to get creative to find the answer. Here are some of the options the Wildcats have for this year:

Immediately eligible graduate transfers have become the hottest commodity in college basketball recruiting, as coaches can land experienced players with 1-2 years of eligibility left to be used as plug-and-play rotation players. Collins already tapped into this market once with Evansville transfer Ryan Taylor this offseason, and tried hard to land the aforementioned Mooney as well. This option probably makes the most sense for Northwestern at this point, as they can land a player with significant D1 experience while not tying up a scholarship long-term. The grad transfer market has dried up quite a bit, but there are still some pieces out there that could help Northwestern.

The best available PG is Tramaine Isabell, who averaged 21.0 points, 7.5 rebounds, and 3.4 assists at Drexel this season after transferring in from Missouri. Isabell is in the process of taking visits right now, with numerous high-major programs in pursuit. While Northwestern hasn’t been reported to have contacted him yet, the renewed need at the point guard position makes it likely that Collins will at least put out some feelers to Isabell and his camp.

Drexel grad transfer Tramaine Isabell tells me he will take an unofficial visit to Seton Hall today. Will officially visit Xavier this weekend and Arizona State next week. #shbb

Another name to watch is former Richmond guard Khwan Fore, who recently decommitted from Tennessee. Fore averaged 11 points, 3.2 rebounds, and 2.7 assists for the Spiders of the Atlantic 10. There are also a couple other stopgap options that would be more than capable of playing solid minutes. Jalyn Patterson (LSU) was a steady contributor for 3 seasons in Baton Rouge, averaging 5.8 points and 3.0 assists per game in just over 20 minutes per contest. Jadon Cohee (Southern Utah) is coming off a strong junior season for the Thunderbirds in which he posted averages of over 12 points and 3 assists per contest. While neither are ideal starting options, they’d both provide a veteran presence. With two scholarships available, Collins can afford to take a gamble on a guy for one year and hope he helps out the team.

Reclassification for a 2019 Recruit

Another option for Northwestern is to try to convince a 2019 recruit to come to college a year early. We’ve seen this practice become more and more common in recent years, with Duke leading the way with their recruitments of Derryck Thornton, Marvin Bagley, and Joey Baker. While it may be a challenge to find a player qualified for Northwestern academically without their final year of high school, there’s more talent available in the 2019 class than in the leftover scraps of 2018. VerbalCommits.com lists 2 point guards that Northwestern has offers out to in the 2019 class, 4-star Kira Lewis and 3-star Ryan Greer. Either could be an option for Collins, as could a different 2019 point guard that Collins has yet to offer.

This route would have been a lot easier had Northwestern known earlier about Lathon’s departure, as there is little to no available talent for this class. The top 41 point guards in the 247sports composite rankings have signed or committed to their schools already, leaving behind not much in terms of immediate help. Still, we’ve seen in the past that non-blue chip recruits can have hugely successful collegiate careers, so their might be a diamond in the rough out there that would help the ‘Cats this year and beyond. One recognizable name that could make sense is Chris Arcidiacono, brother of former Villanova star and current Chicago Bull Ryan Arcidiacono. Chris had mostly mid-majors recruiting him, so he made plans to spend next season in prep school to improve his stock. Perhaps an offer from Northwestern, where he could play at a high level and be close to his brother, would make him reconsider his prep school plans.

Someone on the Current Roster

There’s just one true point guard on the current roster (senior Jordan Ash) so Collins will have to get creative at that position if he can’t find some help from outside the program. In a bench role behind Bryant McIntosh, Ash has served as a serviceable backup for 3 years. While his game isn’t flashy, he knows the offensive system and would be a leader on the floor for this young Northwestern team. Sophomore Anthony Gaines came to Evanston billed as a shooting guard, but was forced into running the show late in the season and performed admirably, averaging 7.2 points, 3 rebounds, and 3 assists while shooting 42% from downtown in the final 6 games of the 2017-18 season. Boston College transfer AJ Turner, who sat out last year in accordance with NCAA rules, also has some creation ability, averaging 3 assists per game during his sophomore season in Chestnut Hill. Collins could also elect to play through his forwards, as senior Vic Law and incoming freshman Pete Nance both have experience handling the ball.

Overall, the loss of Lathon really puts a damper on an offseason that began so promisingly for Northwestern. After landing Taylor, Northwestern lost valuable assistant Armon Gates to Nebraska and missed on Mooney; now the Wildcats lost their point guard of the future with little to no time to replace him. For this and a myriad of other reasons, the upcoming year will be a very interesting one for Northwestern basketball at the newly-renovated Welsh-Ryan Arena.