Only three programs in Division I College Football have racked up more wins than Wisconsin since 2009: Alabama, Ohio State and Clemson. The Badgers have owned the Big Ten West, winning the division in three of the past four seasons.

Unluckily for Northwestern, the Wildcats will butt heads with the Badgers once again this fall — for the 81st time in the past 85 seasons — on October 27, when Paul Chryst’s troops march into Ryan Field. Wisconsin owns the overall matchup, 59-35, with five ties, while the Wildcats have managed to win two of the last four meetings.

To break down this matchup, let’s sift through four burning 🔥questions (with some cooling answers):

🔥1: Is Jonathan Taylor a legit Heisman candidate (and how can the ‘Cats stop him)?

Yeah, he is. The Badgers running back is considered one of the early betting favorites to win the coveted trophy after a near-2,000 yard season as just a true freshman, the most rushing yardage ever by a freshie — he broke the mark previously held by Adrian Peterson. Taylor’s explosiveness, field vision and tackle-breaking prowess make him a once-in-a-generation talent. Not to mention, he’s running behind a loaded offensive line. 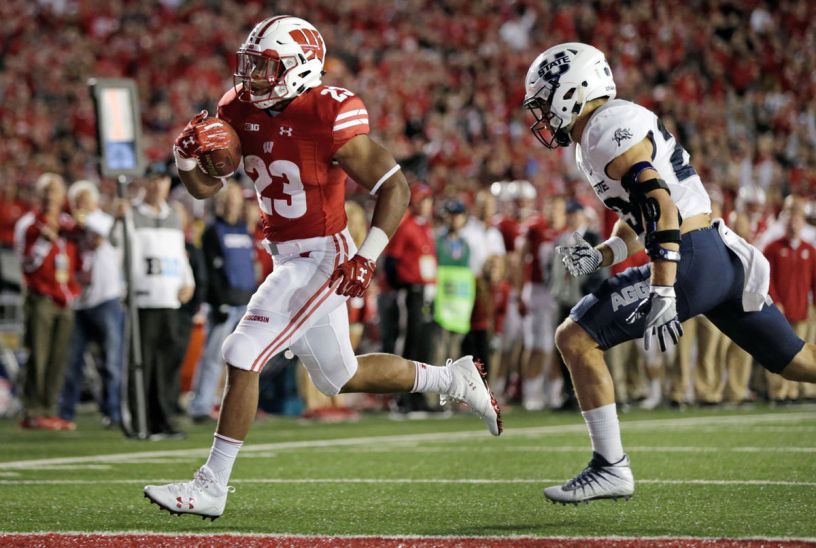 As just a freshman, Taylor was third in the nation with 1,977 rushing yards, including three performances of 200+ yards. Photo from Madison.com.

The Wisconsin O-Line, which allowed just 21 sacks last year and paved the way to almost five yards per carry for its rushers, returns all five starters: Michael Deiter, Beau Benzschawel, David Edwards, Tyler Biadasz andJon Dietzen. These brawny linemen combine for 1,582 pounds and enter 2018 second-to-none in the FBS. Check out some nice photos of them eating.

While all of the above might spell doom for Northwestern’s front seven, let’s flash back to last season’s matchup. With the same menacing Wisconsin offensive line, Taylor ran for just 80 yards, his third-lowest output of the year. Badger rushers piled up just 2.9 yards per carry, the team’s worst mark of the regular season.

While Northwestern’s Joe Gaziano-led front seven may find it a tall task to get a solid push on Wisconsin’s immovable O-Line, the second level will be pivotal. Led by the dynamic Paddy Fisher and Nate Hall, the Wildcats’ linebacking corps will have to squash Taylor on runs where he squeaks past the line. That’s the key, and more on Fisher’s importance to come.

🔥2: How does Northwestern’s offense stack up against a stout Badger defense?

In 2017, Wisconsin boasted the fourth-best total defense in the nation. This year, the unit will have a new look, with seven starters having left UW with caps and gowns. Still, this defense always seems to replenish itself with new stars, and T.J. Edwards, Ryan Connelly and Andrew Van Ginkel make the linebackers a force to be reckoned with in 2018.

However, questions loom in the defensive line and secondary, where only one of four starters from last year remain: D’Cota Dixon. Other than that, Clayton Thorson will be competing against an inexperienced secondary, which is rare in Madison. With a bevy of vertical threats like Flynn Nagel and Bennett Skowronek returning in the receiving corps, the up-and-down passing game will prove important for the Wildcats in this matchup. Not to mention the pass-catching ability of one Jeremy Larkin out of the backfield.

🔥3: Who will be the Wildcats’ X-Factor against Wisconsin?

I promised more on him, so here it is: Paddy Fisher. He’ll be the X-Factor. Not only will he be instrumental in stopping Wisconsin’s downhill run game, but the Badgers’ offense 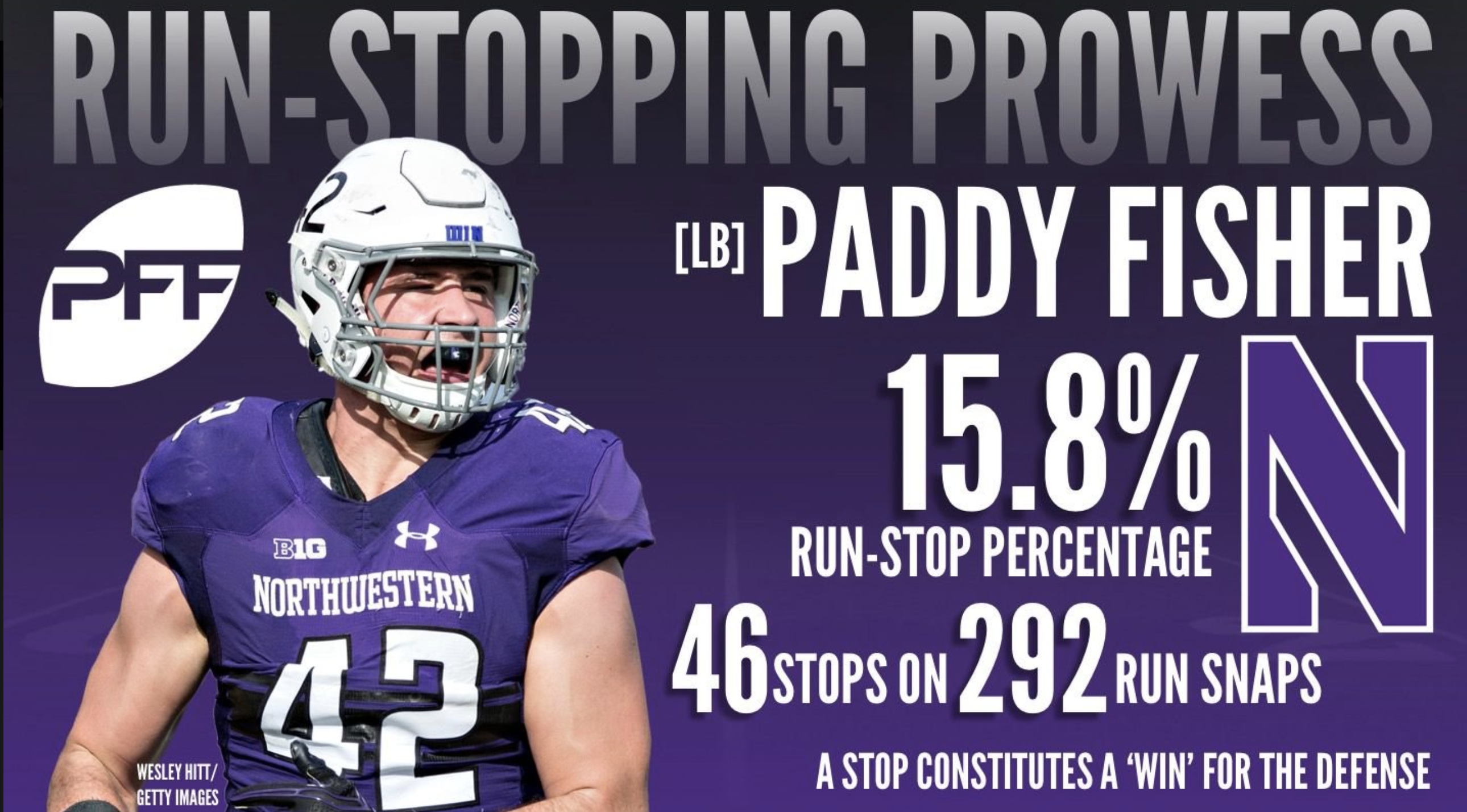 Paddy Fisher’s run-stopping excellence will be vital against Wisconsin, but the sophomore will be tested in the passing game, too. Via Pro Football Focus.

In the linebacking corps, Nate Hall is the primary coverage LB, with Fisher specializing in being a one-man tackling machine, but Fisher will be tested over the middle on short slants and curls from a speedy and nifty set of Wisconsin receivers. Fisher will have to use his tackling-machine skills to turn first down completions into short 4-5 yarders. He’ll be tested in a big way against the Badgers, but Fisher has proven his mettle in the Big Ten already.

🔥4: What are some holes that Northwestern can exploit?

You already learned about some of the defensive holes for Wisconsin, so here’s a potential offensive susceptibility: Alex Hornibrook’s turnovers. The Wisconsin quarterback ended last season on a stellar note, with 258 yards and four touchdowns, with no picks, in the Badgers’ Orange Bowl win over Miami. But interceptions were his downfall last year, with 15 on the season — over one per game. That ranked fifth in the FBS. Under pressure, Hornibrook has been known to take unnecessary risks that prove costly. Wisconsin fans will hope that another year of development will help the signal-caller avoid these issues, but if his old ways return, Northwestern’s back end can feast.

Northwestern’s secondary, starting with Montre Hartage, will hope to have some “thanks for the int” moments against Hornibrook, who chucked two picks against the Wildcats last season.

Northwestern can beat Wisconsin. It almost happened last year, when the Wildcats led then-undefeated Wisconsin, 10-7, at halftime in Madison. And it can happen this year, with the perfect storm of playmaking. Northwestern can expose the Wisconsin secondary and tag Hornibrook for a few interceptions. But Wisconsin has a championship roster. Barring injuries, this Badger team is a legitimate College Football Playoff contender. It’ll be tough.

This is easily the hardest game on Northwestern’s loaded 2018 schedule, so the Wildcats will need to execute on all fronts to take down the Badgers in front of a sure-to-be rowdy home crowd.

But, hey, it’s happened before.