Preview: Women’s soccer travels to Iowa with season on the line

Posted on October 21, 2018 by Parker Johnson Leave a comment

Thanks to a 2-1 win over in-state rival Illinois on Thursday night, Northwestern women’s soccer officially controls its own destiny on the path to the Big Ten Tournament.

Standing in their way: the Iowa Hawkeyes (8-7-2). Northwestern (10-4-3) travels to Iowa City for its final game of the season on Sunday, a win-and-you’re-in game for both teams.

WNUR Sports will not be there for the broadcast — you can watch on BTN2Go if you are a subscriber or use campus WiFi — but we have you covered with all you need to know about this season-defining matchup.

This is the last game of the season for both teams. Currently, Northwestern is hanging on to the 8th spot in the Big Ten (top eight teams make the Big Ten tournament), while Iowa is right on NU’s heels in a tie for 9th.

To put it simply, a win for either team would guarantee the victor a top-eight position. There are lots of other scenarios when you factor in a draw and the other games being played on Sunday, but what you need to know as a fan is that both teams will come into the matchup Sunday knowing that a win will be enough to get them into postseason play. We will go through more scenarios further down the page.

Something in the Corn

A split that immediately jumps off the page when you compare Iowa and Northwestern is home-road performance. Iowa is currently an undefeated 7-0-2 at home, having only allowed three goals in those nine games. Meanwhile, Northwestern is 1-3-1 away from Martin Stadium this season; its only win came all the way back in August at Missouri.

This trend does require a bit of context, though. Four of Iowa’s seven home wins came in non-conference play against lesser competition. If you trim the sample to only Big Ten opponents, Iowa is 3-0-1 at home, but all four games were against teams currently ranked 10th or worse in the Big Ten standings. Context does not absolve the ‘Cats of their road woes this year, though. Northwestern is 0-3-1 on the road in conference. For NU to get the full three points in Iowa City, both teams would have to buck year-long trends.

Northwestern supporters will know about first-year keeper Mackenzie Wood’s stellar performances this season. Wood ranks first in the Big Ten in shutouts (8) and save percentage (0.851) and second in goals against average (0.62). Along with defensive standouts Hannah Davison and Kayla Sharples, the Northwestern backline has only allowed 11 goals this season in 17 games.

The goalkeeper spot has been much more tumultuous for Iowa. Minutes this season have been split between starter Claire Graves (1,040 minutes played) and backup Cora Meyers (550 minutes played). The dichotomy in their performances has resulted in some skewed results for the Hawkeyes this season.

In the six games that the backup Meyers had to start, the Hawkeyes were 1-4-1 and her goals allowed average (GAA) swelled to 1.64. The lone win came against Indiana, when Meyers was pulled at halftime after giving up an early goal. Graves came in for the second half and pitched a shutout while the offense put a pair of goals past the Hoosiers. Meyers allowed at least one goal in every game she started, and held a save percentage of just 0.64.

With Graves in net, the Hawkeyes are a completely different team. The junior goalkeeper is second in shutouts, third in wins, and fifth in saves in Iowa history in just three years. In her 11 starts, the Hawkeyes are 7-3-1 and her GAA is 0.87. Her save percentage is 0.80, with six shutouts in those 11 starts.

The big takeaway: if Iowa had Graves for all of Big Ten play, they could realistically be a top-4 team in the Big Ten. Iowa is much better than its record suggests, and Sunday will feature two of the best goalkeepers the Big Ten has to offer. Don’t be surprised if one goal is the difference between these two stalwarts.

We know that a win would get both teams into the Big Ten tournament, but seeding is still on the line, and a draw would throw a wrench into everything. Here are the standings again, for reference. Focus on the “Pts.” column and remember you get 3 points for a win, 1 for a draw, and 0 for a loss.

If Northwestern wins, it is guaranteed a spot in the Big Ten tournament.

If Iowa wins, Northwestern is out no matter what.

Worst case: There are several scenarios in which Northwestern finishes eighth in the Big Ten, but that is the worst possible outcome if they beat Iowa. Northwestern is out no matter what if they lose to Iowa. 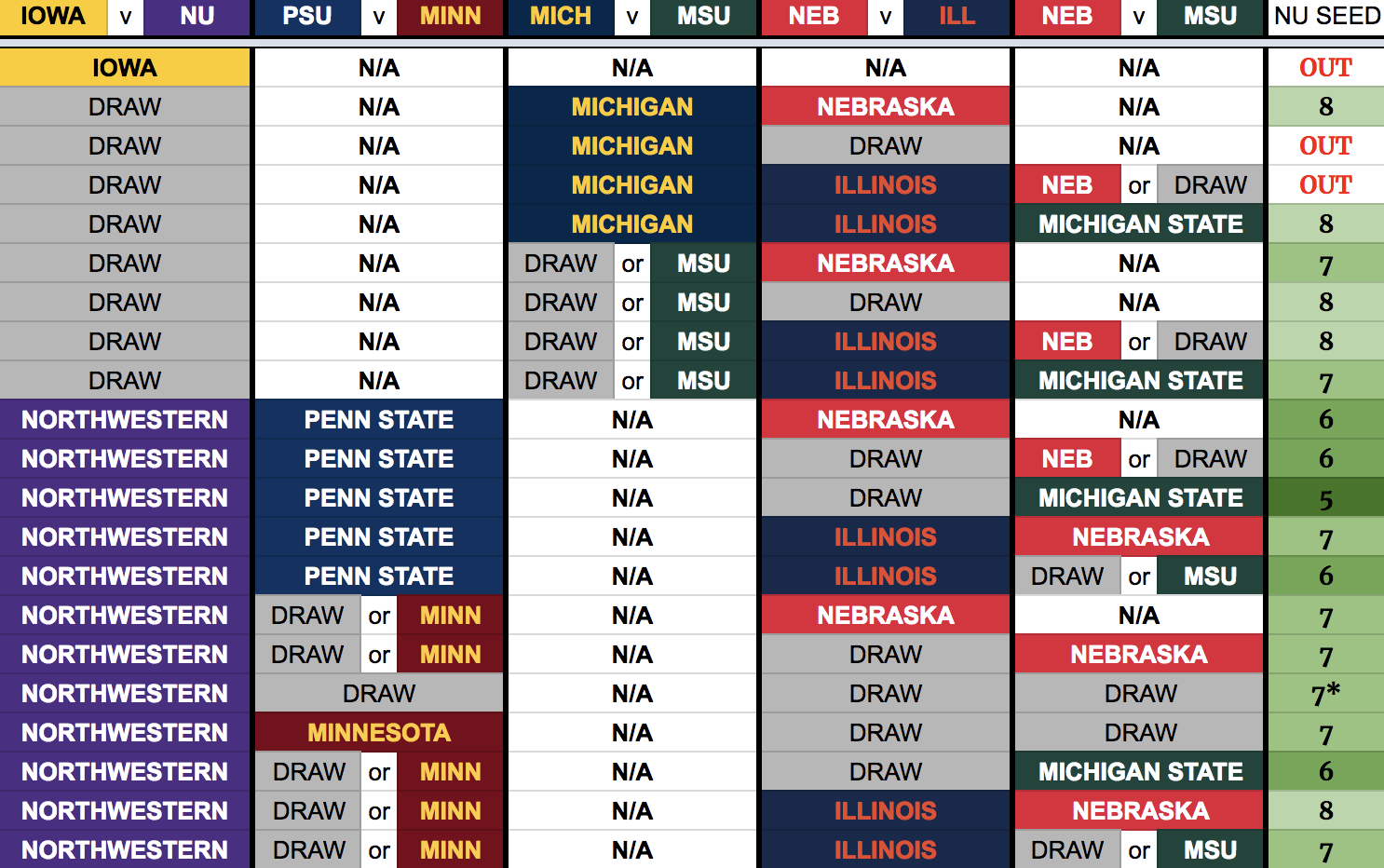 Northwestern women’s soccer qualifies for the Big Ten tournament if they:

That’s a lot of scenarios to run through, but when you distill Sunday’s game to a one-off, win-and-you’re-in mindset for both teams, you remember how simple things really are. It’s time for the ‘Cats to show what they’re made of.