Posted on November 26, 2018 by Pat Timlin Leave a comment

Editor’s note: Each week, WNUR Sports recaps the news and results from the in-season, non-revenue teams that we cover in order to help our listeners and readers stay connected to the pulse of Northwestern athletics. For football coverage, check out this week’s game recap HERE. Teams are discussed in alphabetical order.

The Northwestern Women’s Volleyball team finished up their season this past week, with a final record of 16-16 (6-14 Big Ten). This marks the first .500 or better season under Coach Shane Davis, and the Wildcats will look to continue their progress next year with a talented group of young players set to return.

On November 21, the ‘Cats made the trip to Ann Arbor to take on No. 18 Michigan. The Wolverines dominated the game at the net, finishing with a hitting percentage of .311 while containing the Wildcats to hit just .000 in the matches three sets. Nia Robinson finished with a match-high 13 kills, but Michigan attackers Paige Jones and Carly Skjodt each had double digit kills, proving too tough for Northwestern to handle. 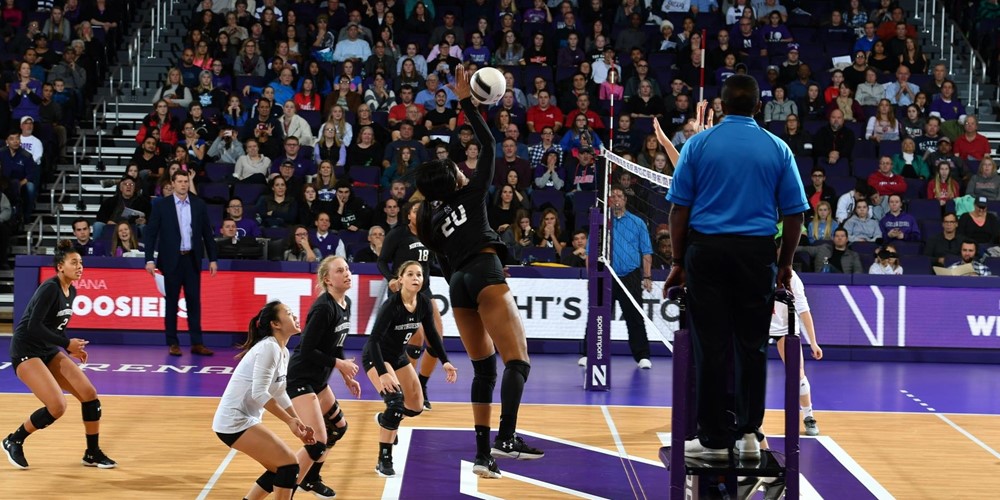 Alana Walker (20) goes for the kill in the Wildcats’ Season Finale against Indiana University. Northwestern Athletics

A few days later, the Wildcats played their final game of the season at home against an Indiana team who beat them earlier in the season. Looking for revenge, Northwestern played some of their best defense all season. Alana Walker finished with a whopping 11 blocks, while Olivia Viscuso and Abryanna Cannon each finished with seven blocks as well. Indiana had three attackers finish with double digit kill totals, but Nia Robinson dominated, leading all players with 25 kills when all was said and done.

Northwestern Women’s Basketball had only one game this week, and they dominated the Skyhawks of the University of Tennessee at Martin at home. With the Wildcats missing high-scoring forward Abi Scheid, Australian first year Jess Sancataldo exploded for 20 points in just 13 minutes. Four starters finished in double digits, and Coach Joe McKeown was able to give playing time to everyone on the roster as the ‘Cats pulled out to a large second half lead.

UT-Martin was led by Sophomore Chelsey Perry’s 12 points, but the Skyhawks struggled with taking care of the ball as they finished with 20 turnovers. Those turnovers turned into buckets on the other end as the ‘Cats finished with 31 fast break points. The Wildcats look to stay undefeated as they prepare for their Big Ten/ACC matchup against the Pitt Panthers this week.