Men’s Basketball: What the Wildcats Have to Do to Dance

Posted on January 2, 2019 by Kevin Sweeney Leave a comment

Those opening thirteen games were a mixed bag for Chris Collins’ bunch. Despite being picked 12th in the Big Ten’s unofficial preseason media poll conducted by The Athletic and Columbus Dispatch, Northwestern has shown the ability to compete with the nation’s elite with two-point defeats to Michigan (#2 nationally in the most recent AP Poll) and Indiana (#21 nationally). They also took #23 Oklahoma to overtime, with their only other setback coming in blowout fashion on Thanksgiving Day to Fresno State (ranked #67 in the NCAA’s NET rankings).

While those close losses should give the Wildcats confidence heading into conference play, they also leave Northwestern without any resume-building wins as they head into the new year. High-major wins over  Georgia Tech (#113 in NET), DePaul (#140), and Utah (#142) won’t do much to move the needle in the eyes of the NCAA Selection Committee.

The good news? The Wildcats have avoided bad losses and will get tons of chances for quality wins in the Big Ten, which is perhaps the nation’s best conference this season with three top-ten teams and ten top-50 teams in the NET rankings. The numbers also like the ‘Cats, as they are ranked 34th in ESPN’s BPI, 54th in NET, 47th in KenPom, and 53rd in the Sagarin rankings. All of those metrics are used by the Selection Committee in selecting the 36 teams worthy of at-large bids. For reference, the average KenPom ranking of the “last four in” to make the NCAA Tournament over the last three years was 45.5, so Northwestern is right on the cut-line.

So what do the Wildcats have to do in the season’s final 18 games plus conference tournament play to reach the Big Dance for just the second time ever?

The most important thing for Northwestern to do in order to make their case is to get some quality wins. The NCAA sorts games into four different quadrants as follows:

Neglecting any possible conference tournament results, Northwestern probably needs to get to at least 9-11 in Big Ten play with at least three Q1 wins to get into the NCAA Tournament.

Let’s break down the remaining schedule:

These are all road games against teams ranked in the top 20 of the NET, and Bart Torvik’s T-Rank projections give Northwestern less than a 25% chance to win each of these. Winning one of these would be big for the Wildcats’ resume, and two wins would probably make the ‘Cats feel a little more safe about their Selection Sunday chances.

These eight games are mostly home games against teams expected to be in the NCAA Tournament picture. Wisconsin, Ohio State, Indiana, and Iowa look like Big Dance locks, while Purdue, Maryland, and Minnesota are likely bubble teams like Northwestern. 5 wins in this stretch would go a long way.

Games You Have to Win:

The title speaks for itself. If you want to make the NCAA Tournament, you have to be able to beat Illinois, Rutgers, and Penn State. While those clubs aren’t pushovers (PSU ranks 77th in NET, Rutgers ranks 126th, and Illinois ranks 129th), they are games Northwestern will be favored in and will have to win. The ‘Cats can probably afford one loss in these five games, but any more would be crippling.

I used Bart Torvik’s Teamcast system to get a sense of the Wildcats’ postseason chances. I gave Northwestern a 1-4 record in the “resume headliner” games, a 5-3 mark in the “50/50 games” and a 4-1 record in the “games you have to win”. Here’s exactly what I projected: 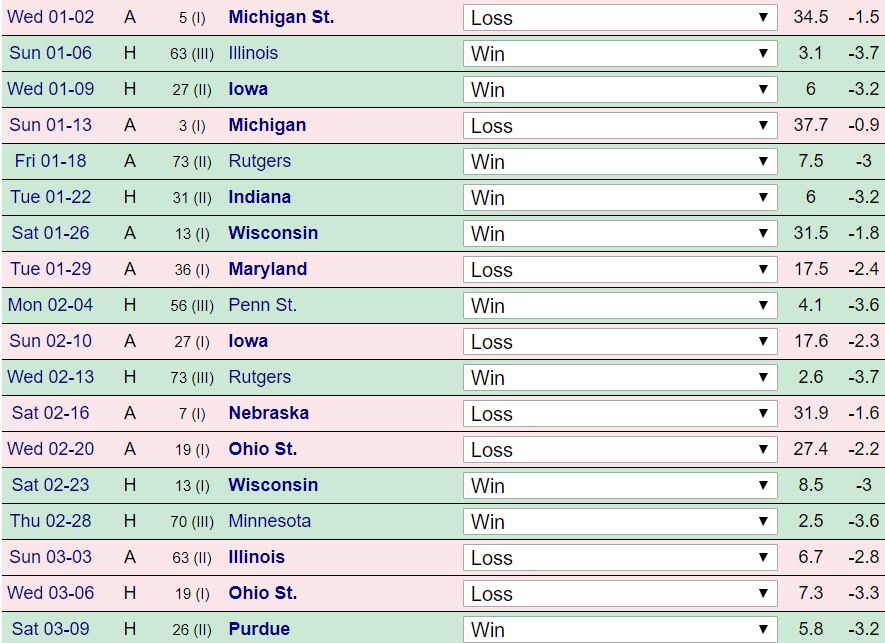 [You can make your own projections here]

With these projections and no conference tournament results, Torvik’s computer projections place Northwestern as the second team out of the field with a 50.7% chance of getting a bid to the Big Dance. Add in a random conference tournament simulation by Torvik that includes wins over Rutgers and Nebraska before a loss to Wisconsin, and Northwestern would be the 3rd-to-last team in the field, this time with a 71.3% chance to dance.

As you can probably tell, it’s going to come right down to the wire for the ‘Cats this season. One or two bounces could be the difference between hearing your name called by the committee or being left heartbroken at home. Stealing one of the three games against Michigan, Indiana, and Oklahoma earlier in the season would have made a huge difference, but Northwestern still has plenty of opportunities ahead of them to make their case to the Selection Committee.