Which Two Teams Should the Big 12 Add?

Posted on March 1, 2019 by Amit Mallik Leave a comment

It used to have 12, but from 2011-2012, it lost four teams. Colorado went to the Pac-12, Nebraska went to the Big Ten, and Missouri and Texas A&M left for the SEC. It responded by adding two more teams from non-power five conferences in Texas Christian University (TCU) and West Virginia. The Big 12 field settled in with a list of Texas, Oklahoma, Texas Tech, Baylor, TCU, Oklahoma State, Kansas State, Kansas, West Virginia and Iowa State

Over six years later, the conference is still solidly a member of the Power-5 and a force to be reckoned with. But with just 10 teams, it feels incomplete, notwithstanding its own moniker.

In the fall of 2018, the Big 12 voted on league expansion and decided against it, even though 16 teams made their pitch to the conference to join. While the conference held off last year, its very plausible they could vote for expansion in the near future if public pressure mounts. And with 16 candidates, it shows that there is no shortage of schools that would love to join a power conference and reap the rewards.

Our task here? To figure out which two teams out of the 16 candidates are the best choice for the Big 12 to add, using a data-driven approach.

A diverse group of programs that hail from around the country. The majority of these teams are in the American Athletic Conference, which is probably the sixth best conference in football and the seventh in basketball (behind the Power-5 and the Big East). No wonder that these teams would love to join the Big 12 and make a major upgrade.

To narrow this field of 16 down to 2, it’s important to consider what factors matter to the Big 12. If you were the commissioner of the conference, what would you be looking for in a candidate school to add them to your conference?

The factors I came up with, in increasing order of importance, are Academics, Athletic Finances, Athletic Success, Access to Key Markets, and Location.

Teams in the Big 12 are okay academically and almost all pull in over 80 million in revenue. They are extremely strong in the two most important sports, men’s basketball and football, and they are located in ‘Tornado Alley’ with the exception of West Virginia.

And the Mountaineers are an interesting reference point, given that their location is much farther east than the traditional base of the conference. Why were they added? Because they are located in the Pittsburgh television market, the 24th best market in the country, and the second-best market in the conference, behind only TCU, the other new addition in 2012, which hails from the Dallas area. The Mountaineers also carried a strong tradition of excellence in football and basketball with numerous bowl game and NCAA Tournament appearances in the 2000s.

Let’s get started then, with our first, and least important factor: Academics. Here’s how Big 12 stacks up according to the Forbes rankings of the top 650 schools in the country, plotted against enrollment. I’m using Forbes not as a be-all, end-all, but as a general indicator of academic strength. One note is that Arkansas State wasn’t listed in Forbes’ rankings, so we’ve omitted them from this chart. The Big 12 schools are in green and the candidates are in red: 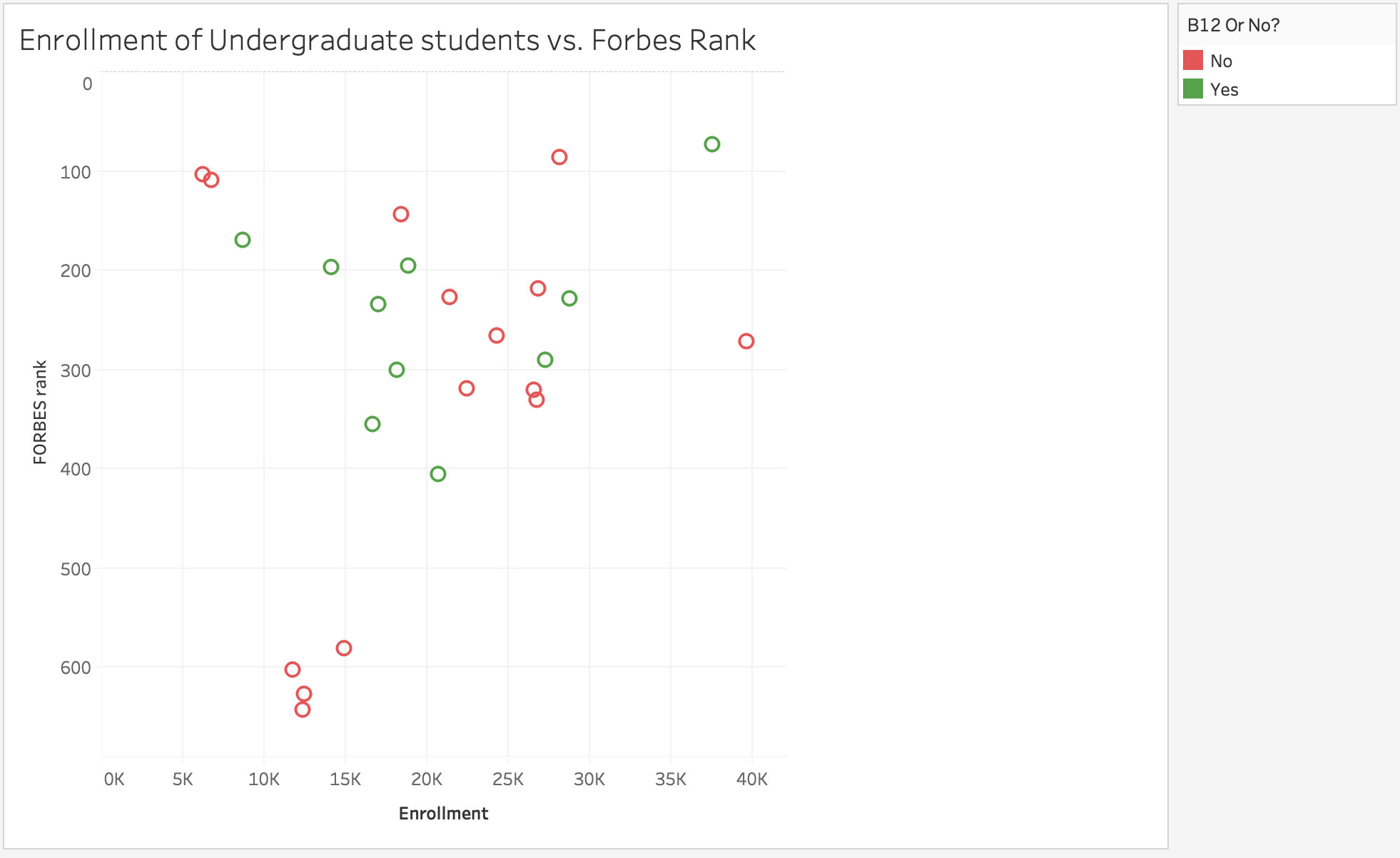 Outside of Texas, that green circle, in the top right hand corner, the Big 12 is pretty ‘meh’ academically, ranking generally from around 150 to 400. There are four schools better than that range in BYU, Tulane, SMU, and UConn, (in that order), and four schools that are ranked worse than 500: 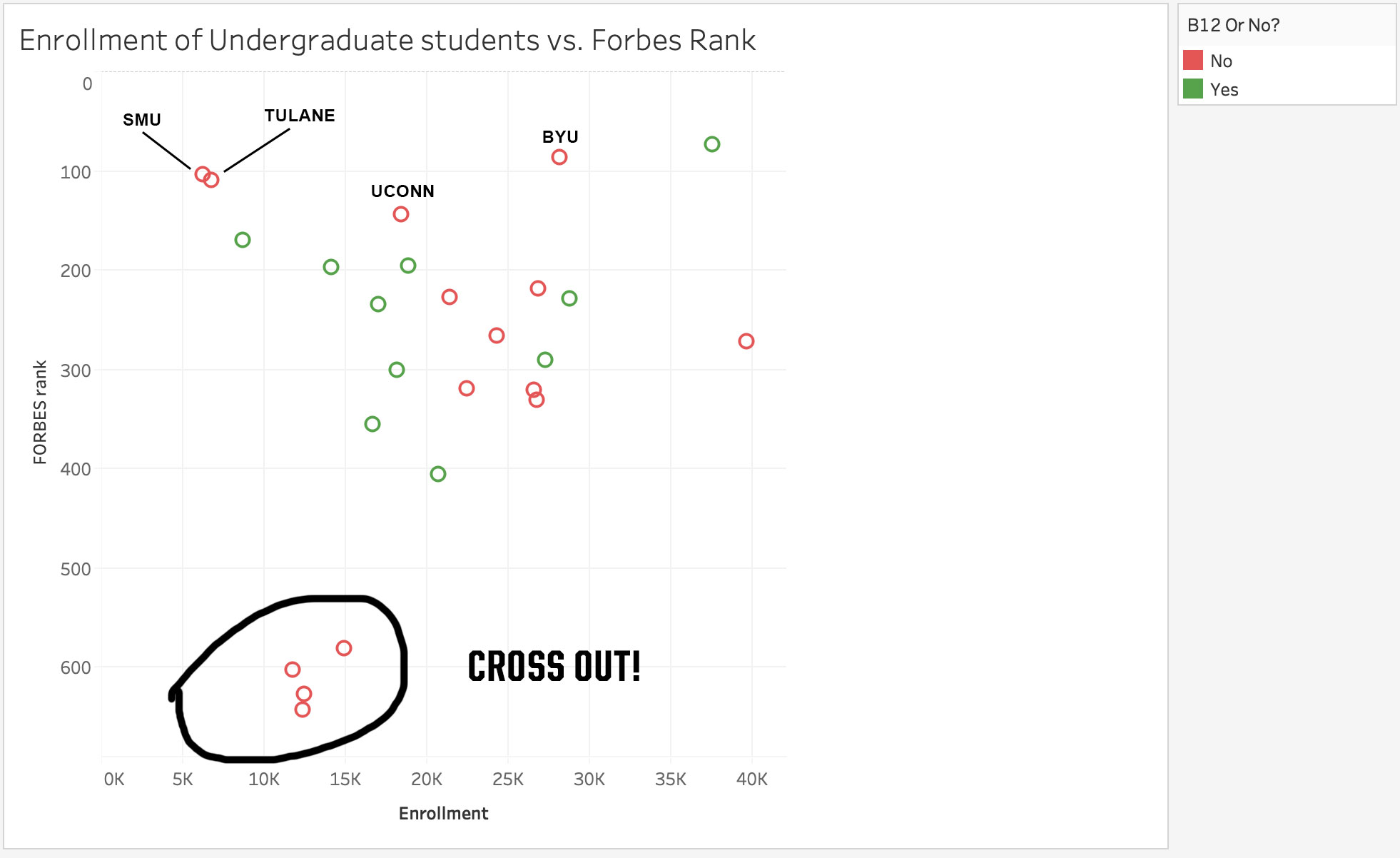 While the academic standards aren’t the highest in this conference, we can cross off those bottom four on our list, and make a note of the top four.

Let’s move on to our next key factor: finances. Specifically, athletic revenue. The Big 12 schools pull in some of the most money in all of college athletics, and while it’s understood that candidate teams clearly aren’t at that level, we want them to be as strong as possible so that when it’s time for revenue-distribution from the conference, nobody at the top feels like they are unfairly pulling weight for underperforming schools.

This next set of data comes from the U.S. Department of Education, and their Equity in Athletics Data Analysis. They have the athletic revenue from every Division-I school in 2017, and we’ve plotted it here for our 26 teams: 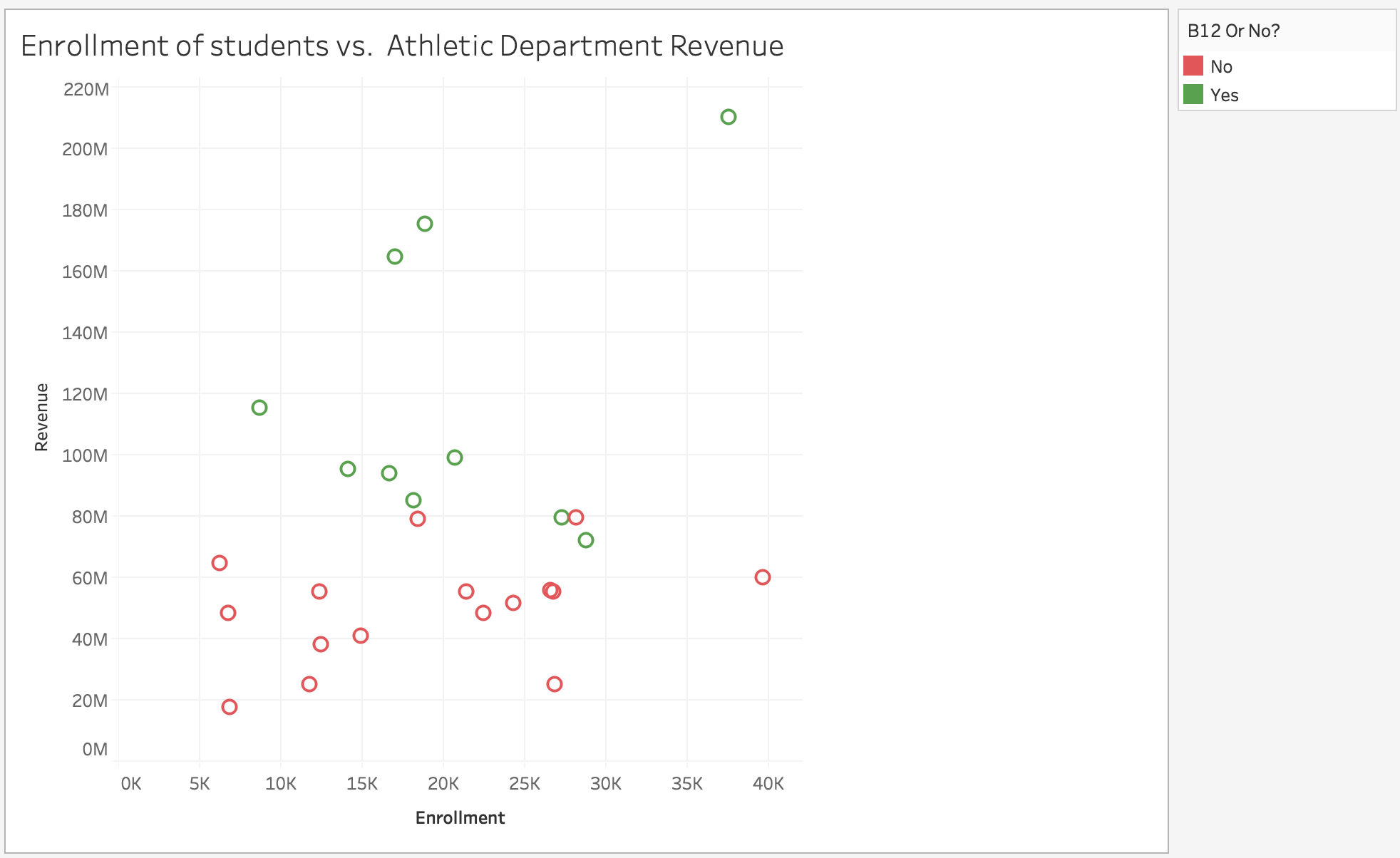 The Big 12 schools make some serious money. Again, that’s Texas leading the way in the top-right, pulling in over $200 million in 2017, more than any other school in the country. Again, almost every Big 12 school made over $80 million in revenue, and two candidate schools did as well — UConn and BYU. We had a solid group then of nine schools that made between $70 million and $45 million, and another five schools that are getting the axe: 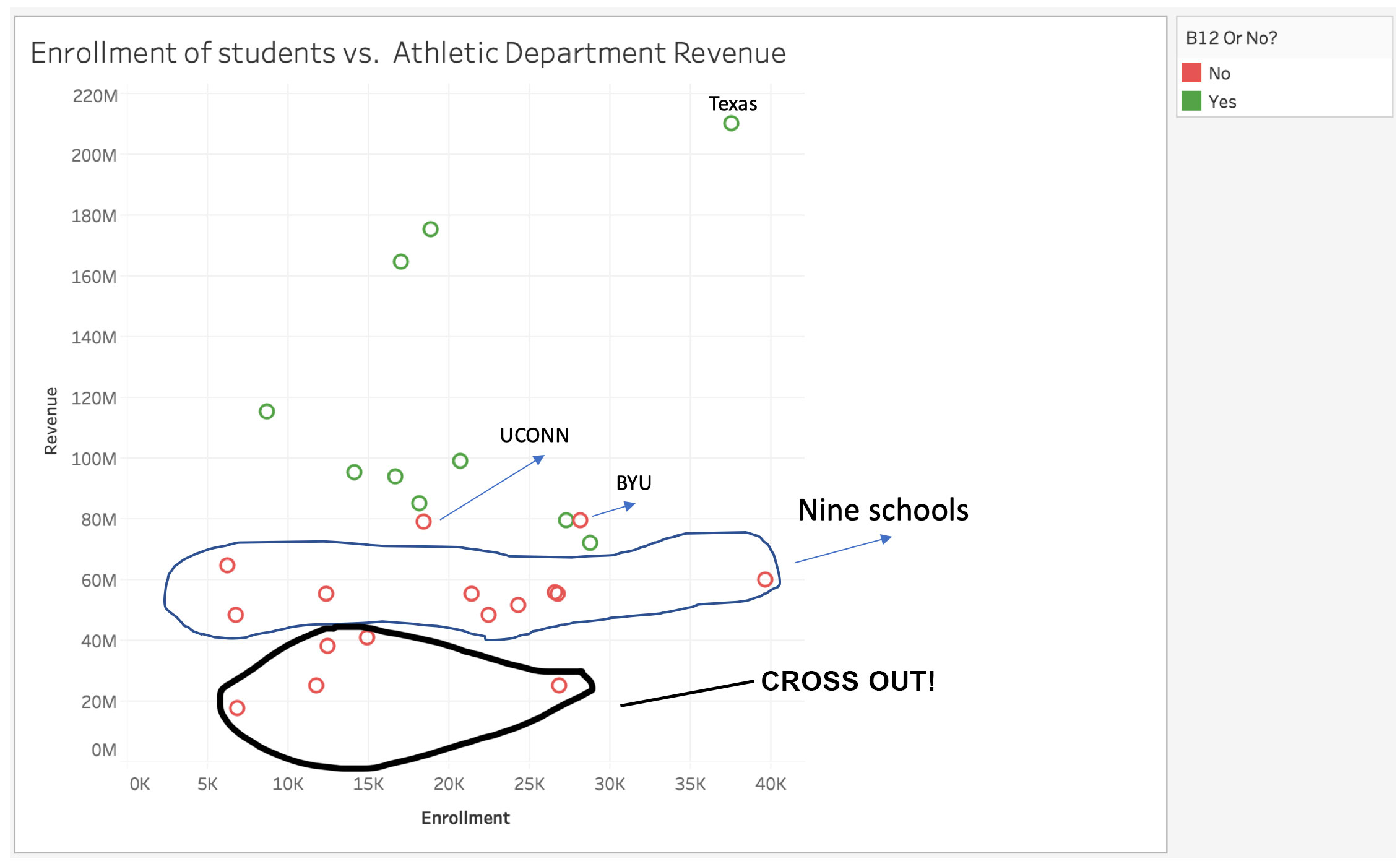 Three of those schools already were crossed off, but we can add San Diego State and Arkansas State to the ‘No’ Column. UConn and BYU are profiling well early:

So long to the Red Wolves and the Aztecs.

Now we get to the on-field metrics. The Big 12 has some football powerhouses in Oklahoma and Texas, and has some incredible basketball programs as well like Kansas and West Virginia. I took an average of all the 26 team’s rank the the last three years in both football and basketball. I used Football Outsiders’ S&P+ Rankings for football and Ken Pomeroy’s KenPom rankings for basketball. Both rankings are widely respected predictive measures that aim to identify the teams most likely to win games. I plotted them against each other with the best teams the furthest to the top and the right: 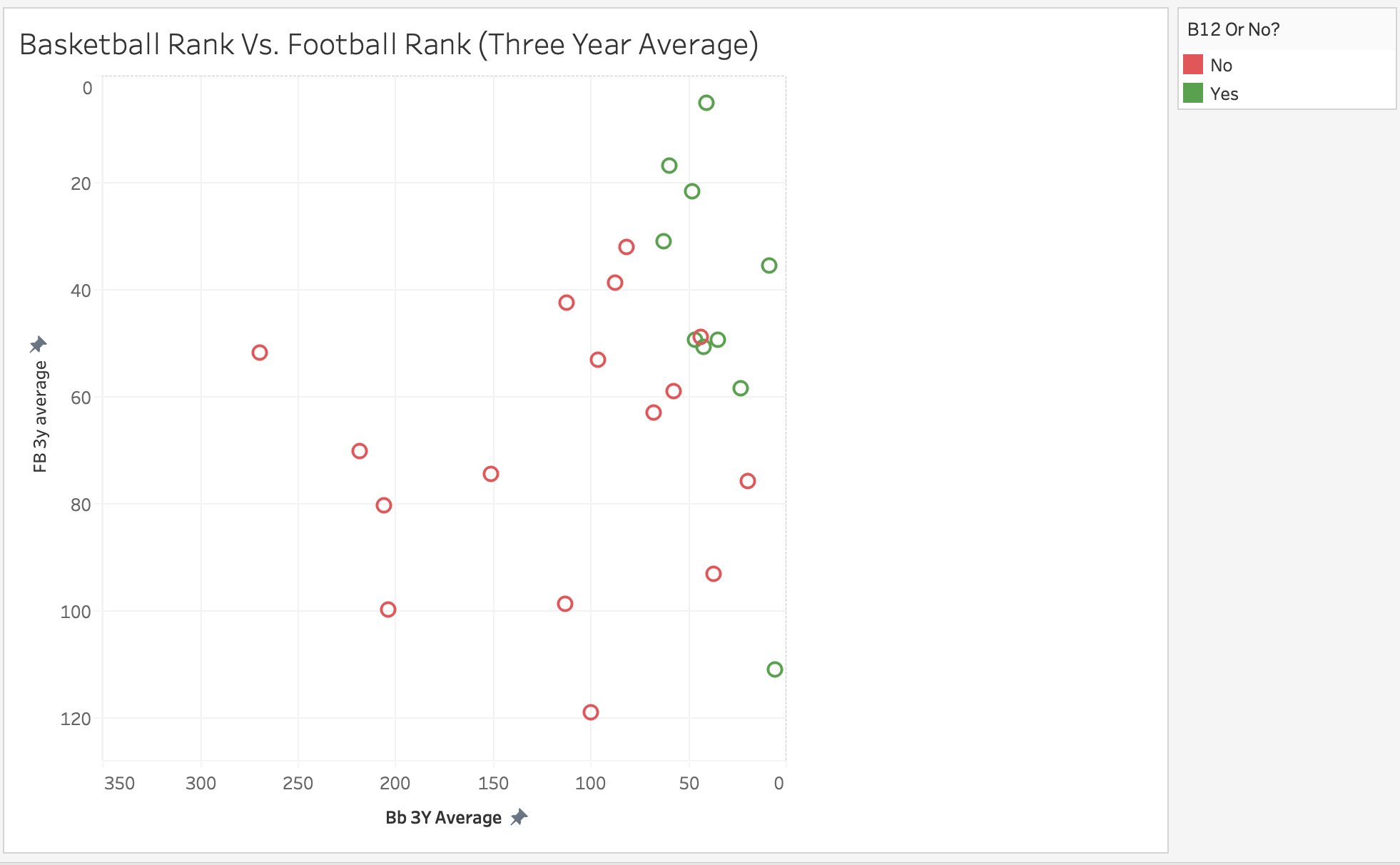 The Big 12 is very, very good as basketball, with all 10 teams ranking in the top 20th percentile of all Division-I basketball teams (there are over 350). It’s pretty good at football, with three teams in the top 20th percentile and nine of 10 in the top half of the 128-team field comprising Division-I FBS programs. Oklahoma is very good at both sports, and Kansas is one of the best basketball teams in the country. Out of the 16 candidates, I wanted to look at the four best teams in both sports, and also eliminate the teams that aren’t particularly strong at either: 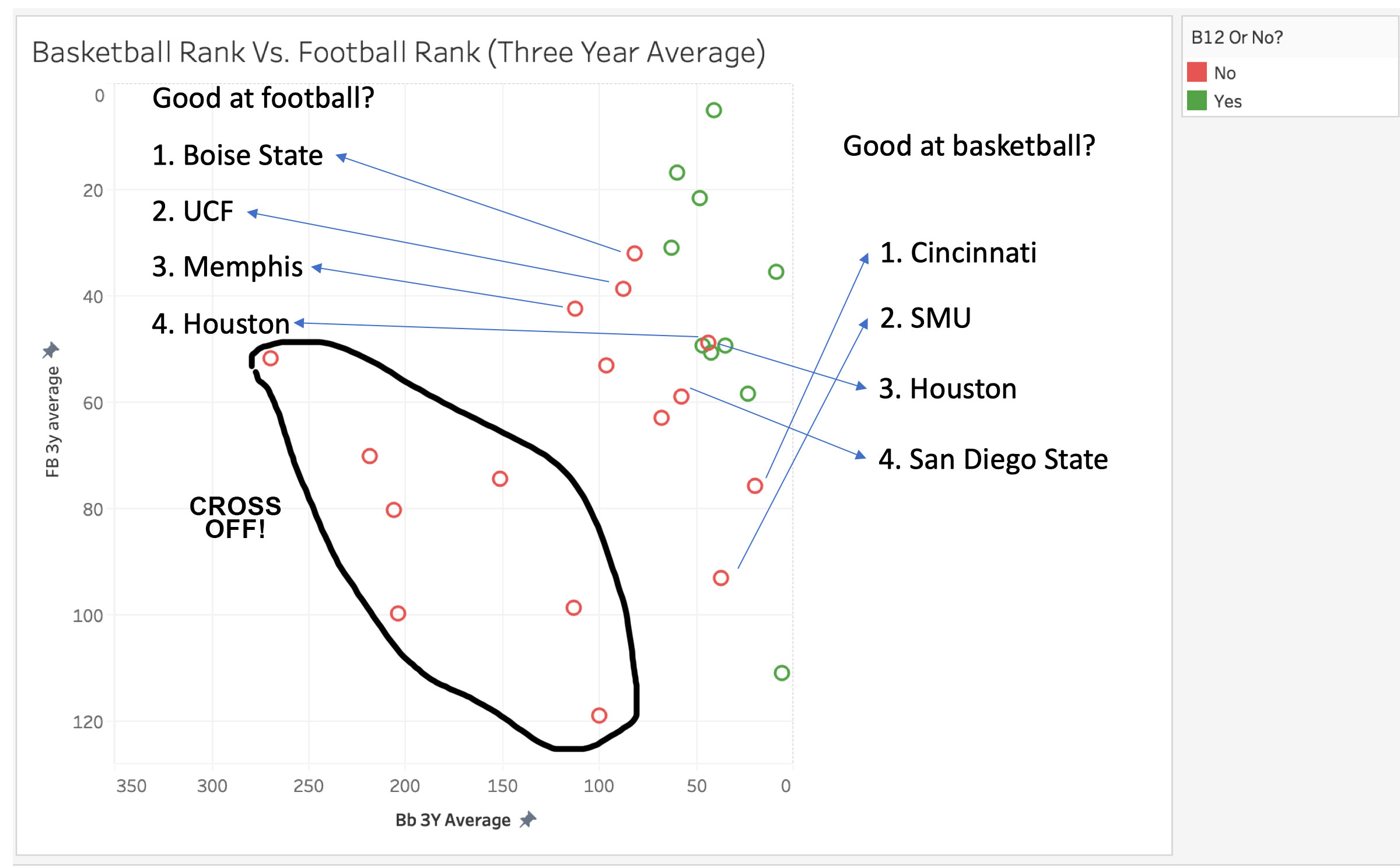 It’s a good showing for Houston, which ranks in the top four for both sports, and is right in that cluster with Big 12 schools Kansas State, Texas Tech and Iowa State. The two candidate schools that aren’t in the cross-off range, but aren’t in the top four either are BYU and Temple. This is rather unfortunate for UConn, who despite having profiled well previously, are one of the worst football teams in the country. Had we used more than three years of data, the Huskies would certainly be boosted by their memorable NCAA Championships in 2014 and 2011. As we’ll examine shortly though, UConn would always be a tough sell by virtue of their location on the East Coast. Of the seven teams that won’t make the cut, we have four new additions in UConn, South Florida, Colorado State and Tulane.

Goodbye to the Huskies, the Bulls the Rams, and the Green Wave. We’ve got some separation now with just six teams left!

Onto the final two factors: Access to key markets and location. Which teams could conceivably lie in Big 12 territory, and of those teams, could any open up new markets to the conference?

Here’s some perspective about TV markets for the Big 12. It’s situated in a lot of small markets! 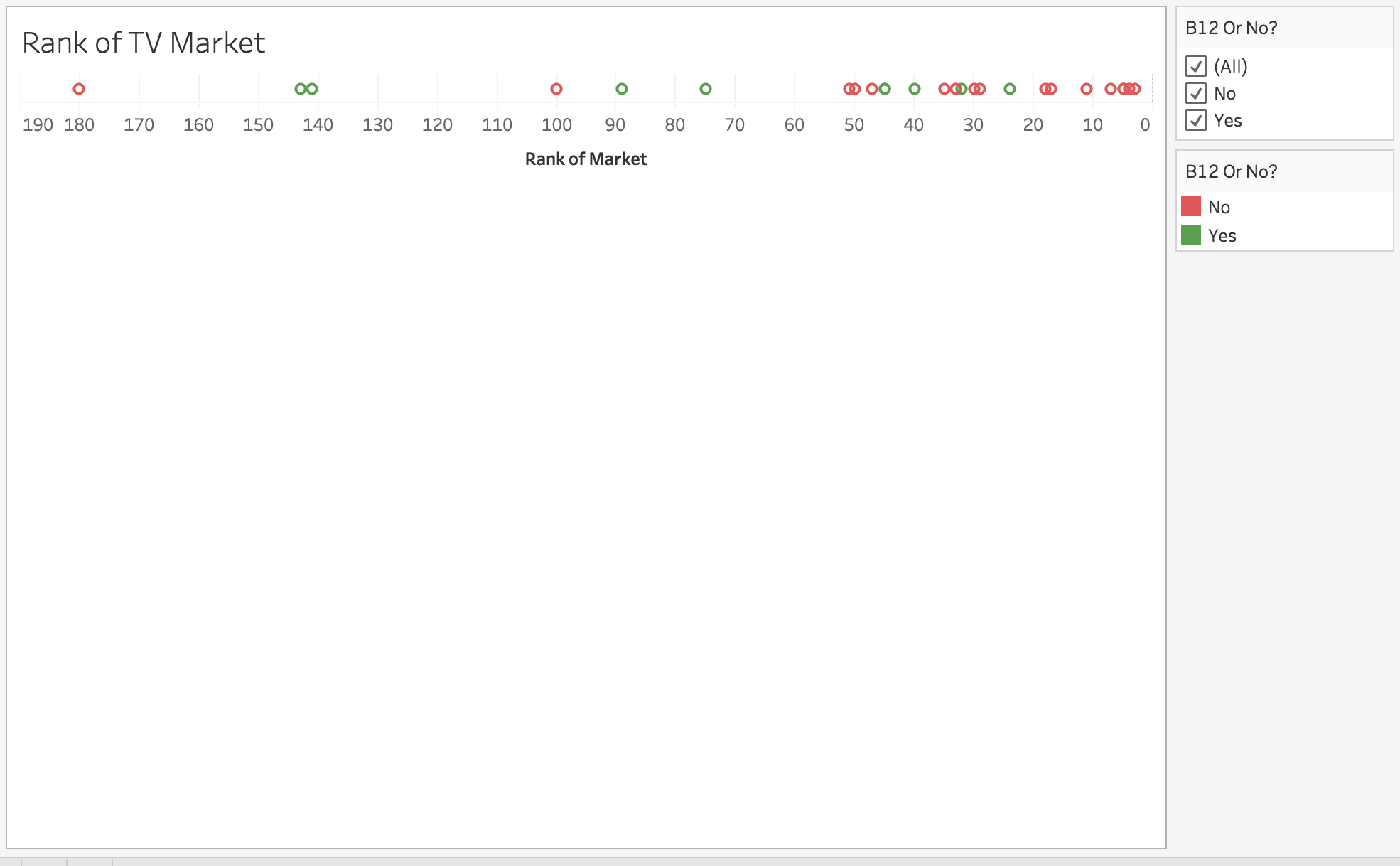 Half of the schools are located in markets that rank outside the top-40 markets nationally. Having schools in Lubbock, Waco, Manhattan (Kansas) and Ames will do that for you. Most of these candidate schools would automatically be improvements for the conference. Let’s look at the six schools and where they actually are, and what the size of their market is: 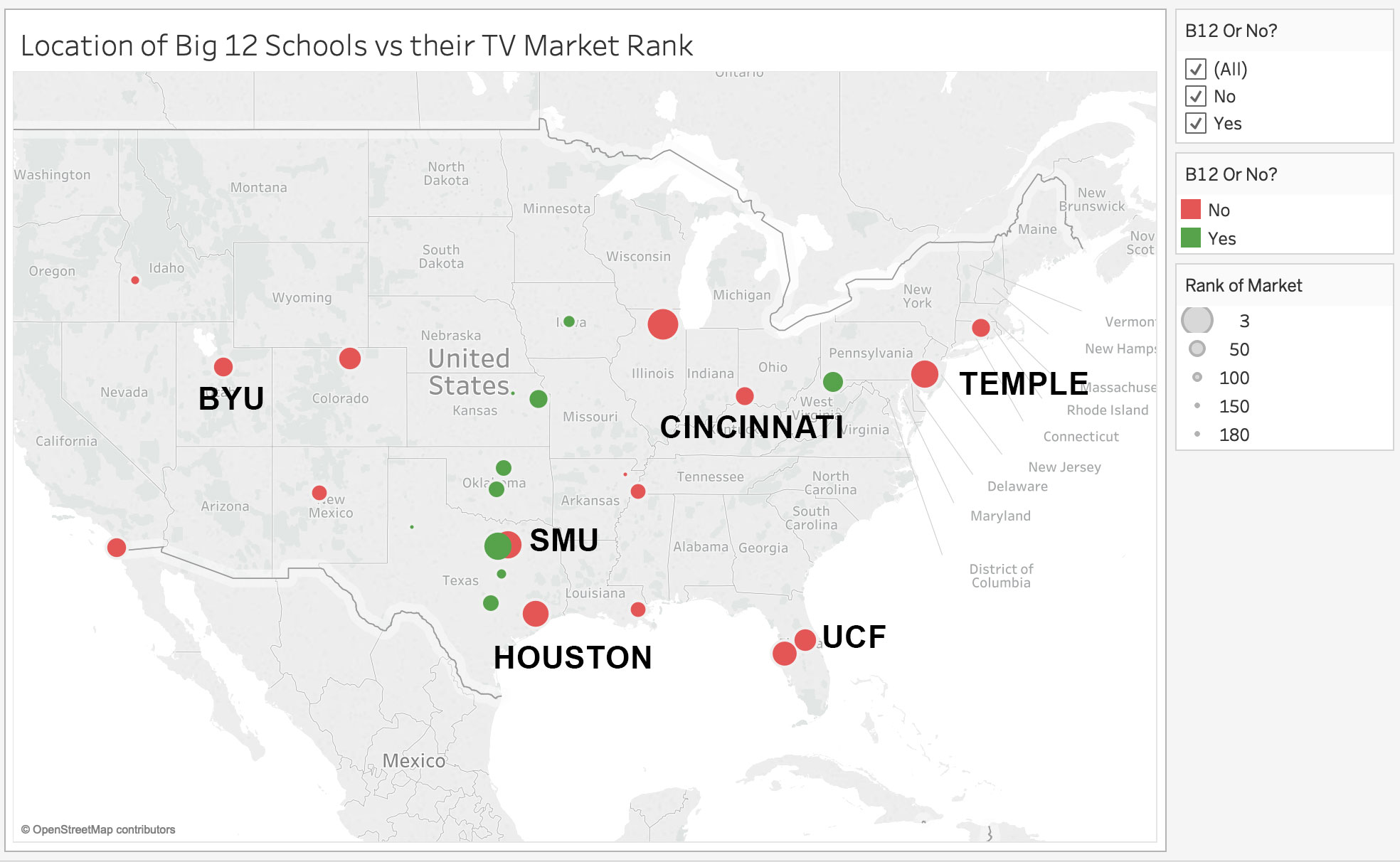 You can see that the Big 12 schools are really quite clustered in Tornado Alley outside of West Virginia which results in an eastward skew. Temple, a program has made it this far, doesn’t have any ‘pluses’ and is a little too far east. The same geographic analysis would have applied for UConn. BYU, a school that has profiled well academically and financially, is simply just too far west. While the Big 12 used to have Colorado, the addition of West Virginia just makes it hard for a conference to cover a swath of the United States spanning over 1,900 miles.

I think UCF also unfortunately falls out of the running, speaking from a purely geographical sense. They are in a strong market (Orlando is 18th), but it’s not close to the Texas based schools, or to West Virginia. I don’t think the Knights are a bad choice. They finished off an undefeated season in football in 2017 and while their basketball team ranks worse than any Big 12 team over the last three years, they are currently 36th in KenPom in the 2018-19 season, ahead of five Big 12 schools.

That leaves us with Houston, SMU and Cincinnati. Houston to me is a no-brainer, rating well in terms of athletic performance, an excellent location in Texas, and access to the seventh biggest market in the country. Furthermore, it’s a market the Big 12 would love to win back after losing Texas A&M to the SEC.

With two left, it’s a tough choice. SMU is very strong at basketball, and excellent financially as well as solid academically for a small private Christian school in the Dallas area. They fit the exact profile of TCU, another small private Christian school in Dallas. That’s the Achilles’ heel in the Mustangs’ case. SMU, while located in the heart of Big 12 country, offers no access to a new market, since TCU already has the Dallas market locked up.

Cincinnati isn’t a powerhouse financially or academically, but they are a very, very good basketball school, and they are in the 35th biggest TV market in the country. It’s a new market, and geographically, they benefit immensely from the inclusion of West Virginia. The Bearcats could develop a rivalry with the Mountaineers, and allow the Big 12 to attract eyeballs from more than just the Great Plains and Texas.

Here’s an updated map of our findings: 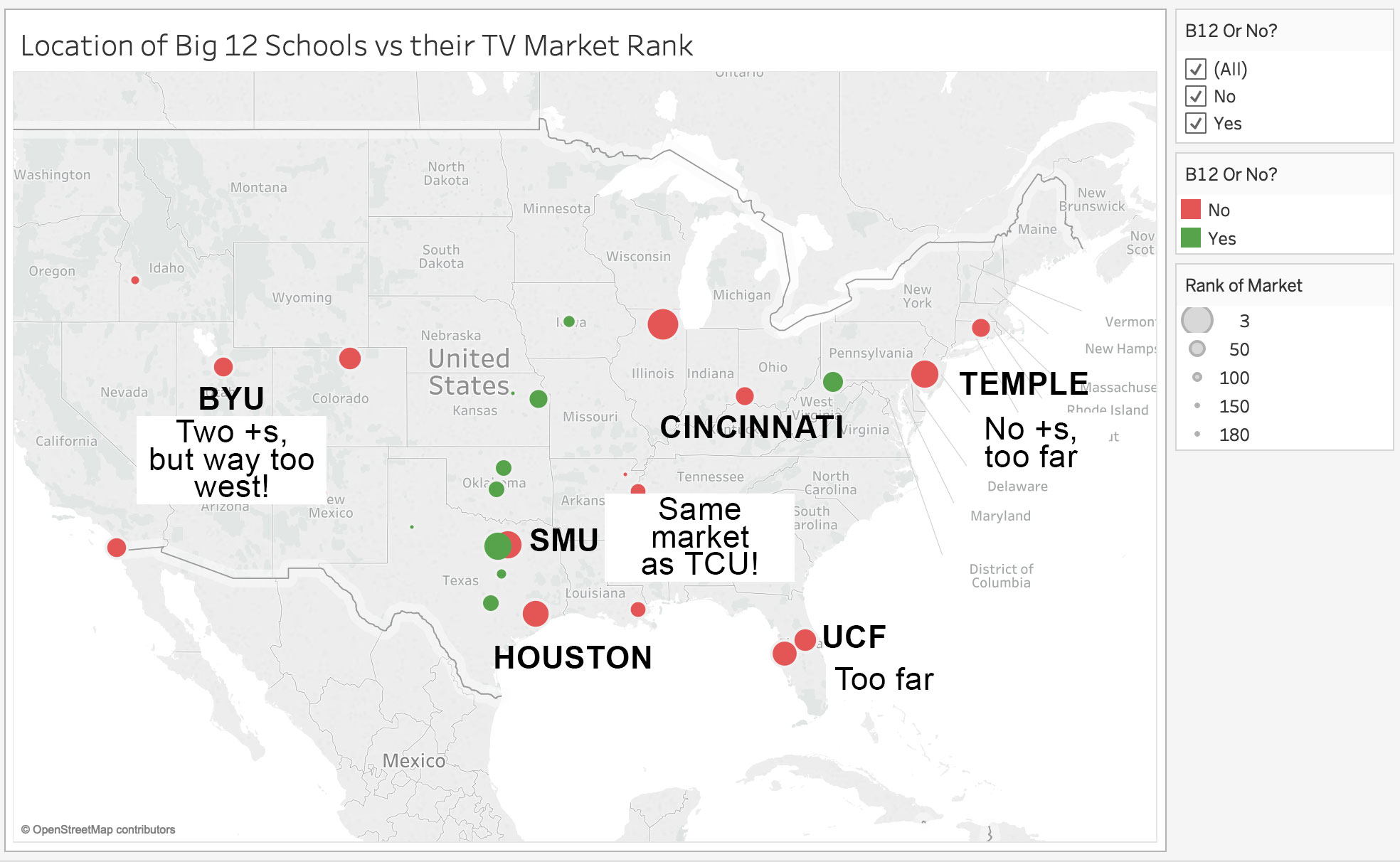 Through this analysis, I believe that Cincinnati and Houston make the most sense, but given the same data, the Big 12 wouldn’t go wrong in choosing either SMU or UCF. It could also go for BYU, but expect to have logistics and travel nightmares.

Of course, the decision is more complicated than just the factors I have presented here. For example, Texas and Oklahoma dominate the decision making in the conference because of their outsized revenue produced, and may be scared of elevating a football team like Houston, that recruits the same players they do, into a better position with more resources.

We will see what the Big 12 does in the coming years. I think expansion is a wise move for the conference to keep up with its larger counterparts, and theres a host of strong programs lined up at the door. The Cougars and Bearcats would be worthy additions to ensure the conference remains one of the most competitive in collegiate athletics.