What are the best Northwestern Band songs? 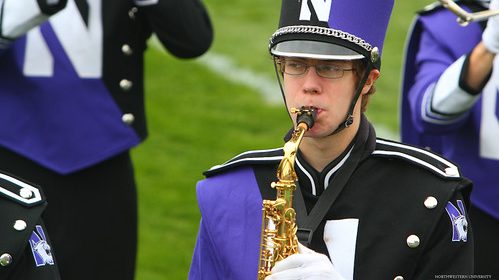 I would love to pretend that someone sent me in a mailbag question asking what the best Northwestern band songs are. That never happened. I still need to answer anyway.

Here’s some extracurricular content for my senior spring column. Maybe it’s just me, but I love college bands and their transformation of our favorite hits into a gameday soundtrack that makes the experience so much more enjoyable.

To follow along, you can check out my playlist on Spotify, which is a unscientific collection of the songs I’ve heard the Northwestern marching band play at basketball and football games in the last two years:

What criteria am I using to rank the songs? I’m glad you asked. We’re going to use some mixture of how good the song is in real life, how good the Northwestern band rendition is, and how iconic it is to the canon. I don’t know exactly what that means, but you know a good band song when you hear it– basically going off the ear test.

My next caveat is that I will not be ranking the three official school songs (fight song, Push On, and the alma mater), which are all amazing. Here are three digressions, one for each song, that are entirely unnecessary.

Great. If you’re still with me, it’s time to rank the actual popular songs that the NU band plays. I’ve got 23 here.

Tier 9: Can I watch kids fail at Tic-Tac-Toe instead?

Lips Are Movin’ is a bad song overall, and a bad band song. I think it’s been discontinued, and with good reason. Sorry Meghan Trainor, but I too, am only all about that bass.

As for Get Lucky and Feel It Still, they’re solid songs in their own right. Their band versions, however? Just not that inspiring. They’re both just too casual and laid back to get me going. Get Lucky hasn’t been broken out in a while, and the band just added Feel It Still late in the 2019 season. If we’re lucky, we won’t still be feeling these tracks next season.

Tier 8: Inspired by Green Day, but uh, not Green Day

Look, I’ll be the first person to stand for angsty 2000s punk-pop. But these ain’t it. The fourth and fifth best out of the top five Fall Out Boy songs just are a little too aggressive for a pep band to play. Like, they’ll get you locked in, but the band version just feels wrong. It would be like playing a hype song like Sandstorm on Boomwhackers. (FYI, that’s happened, and here’s a rabbit hole that will make you regret using the internet in 2019.)

Believer and Imagine Dragons don’t exactly fit the not-as-good as Green Day comp, and we all know that Imagine Dragons seem to only make songs that get ripped for sports promos on TV nowadays. But that’s it. They should be on TV, and not in a marching band arrangement. It doesn’t fit!

Dirty Little Secret is similar, and the punk rock just electric guitars and whiny wailing struggle to come through on brass and woodwins.

I’m sure there are ways to make these songs work, so maybe it’s just the arrangements, but all four don’t have enough tonal variance to pop.

Tier 7: A surprise to be sure, but a welcome one

The band added all three of these gems this year to the rotation. All three songs hold up as iconic hits from the 1980s. The only issue is that with their late additions to the NU canon, they just don’t feel entirely right yet.

With more time to settle in, these songs could keep climbing — especially Take on Me — which is made for band with its instantly recognizable riff. When it’s time to break out the heavy hitters, you can leave these three at home, but they make for a pleasant first half under-12 timeout any day of the week.

Tier 6: Queens of pop, but not on the throne

What’s better than some 80’s hits? Some 2000s bangers from pop titans. These three fall just outside the top ten, but each one is instantly recognizable, great to sing-along to, and just a hands-down jam. The band rocks all three, and in this tier we have the first of many special moments on the list: an iconic key change!

And not just one. Beyonce rocks FOUR key changes in Love on Top and while the band might only have one or two, a good marching band key change is a work of art.

Tier 5: Top of the Charts then, top ten now

Shut Up and Dance peaked at number four on the Billboard 100 while Uptown Funk sat at number one for a good 14 weeks. Both 2014 hits are insanely catchy, and have stayed in the band rotation five years past their heyday because of how well they hold up.

They’re a little overplayed, but Uptown Funk is slightly phasing out. I say we bring it back. The band versions of these two are just so darn good and get you going. Anytime, any game situation, any atmosphere, you’re getting a little pep in your step back when you hear either. That’s the definition of a top-ten Northwestern band song. It’s hard decisions only from here on out.

Two old hits that get it done. We had some older jams higher up on the list, but these two rank so well because they’ve been in the rotation for quite a while, and the band versions are more fun than the slightly more mellow mood that Take on Me and Africa bring.

Those two are fun, but you hear them and it feels meme-ified (thanks Weezer!). Nothing meme-y about Livin’ On A Prayer and I Want You Back. Livin’ On A Prayer brings the juice for any big-game situations. Few things are better are then screaming along to the chorus and it also has an excellent key change right before the end.

The band version of I Want You Back is just so groovy and happy. We are all Baby Groot at the end of Guardians of The Galaxy when this one comes on at Welsh-Ryan.

6. The Impression That I Get – The Mighty Mighty Bosstones
5. Hey Baby – Bruce Channel

Oh boy. Honestly, the band version of these two songs is better than the original. For the Bosstones, you might disagree, but I think that the Northwestern band version is just a joy to listen to, and it’s remained in the rotation for seemingly forever. Here’s a band version from BYU so you can be reminded just how good it is compared to the actual song.

And nobody would doubt that Hey Baby has become a staple for Marching Bands everywhere. It’s the ultimate sing-along band song, and the little Northwestern touches make it just a boatload of fun. Can you imagine trying to woo someone you wanted to take home and sliding them in?

Tier 2: The second half under-8 all stars

The year is 2050. Northwestern has just given up a mini 6-0 run despite being up 18 to McNeese State. Head coach Sanjay Lumpkin calls timeout. The band director holds up a one. There’s an emoji challenge on the video board. Pat Baldwin III can’t guess that 🚥⬇️🏌️‍♂️ means Go Down Swinging. There’s a moment of awkward silence in Welsh-Ryan Arena. The saxophones start playing Stacy’s Mom. Everyone simultaneously can’t believe this song is still a thing and also is totally into it.

Stacy’s Mom was popular, but not *that* popular. It’s become a cult hit because of the catchy tune, the silly premise and the role it has etched into stone as a band song that will never say die. Give me Stacy’s Mom any timeout and I’m going to laugh to myself that in 2019, a few thousand people are getting down to a song that has the line “But since your dad walked out / Your mom could use a guy like me” in it.

The perfect mix of pop, sing-along-ability, and a great horns showcase makes Pompeii unstoppable. Northwestern gives up a run in a tight game? Boom. How am I going to be an optimist about this? Mood set. Crowd still into it.

I am convinced that Pompeii is just one of those songs that can always rock. It’s a sad song about the eruption of Mount Vesuvius and the walls are tumbling down, but the band version is so upbeat and swelling. Top three material.

Tier 1: Bring the Northwestern Band to your wedding just for these two.

It’s just one of the best marching band songs we have. The opening trumpet intro. You know you’re in for a good one. The zippy first verse. You’re humming to yourself. The band going full tilt for the chorus. You’ve tapped your foot so hard your shoe comes off from the force à la Zion Williamson.

For real though, Holiday is just the quintessential Northwestern Marching Band bop, and it serves as the perfect opener for any game. It signifies that things are finally underway and puts some life into the crowd. Hey, wake up, there’s a game going on, and these horns are so in-your-face you can’t forget.

This is the snappiest of all them all. The punchiness of the way Boys Like Girls wrote their end-of-relationship anthem translates impeccably to the band format. And we have an all-time key change near the end of the band version that is an unexpected delight. For an intense game at Welsh-Ryan, there’s nothing that’ll keep your adrenaline rushing more than a rousing rendition of Love Drunk.

Wow. That was a LIST. Send me your takes, and I’m sure you have them. On Twitter @amitkmallik and email at amitmallik2019@u.northwestern.edu