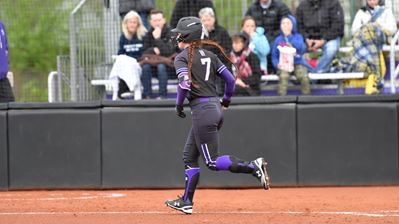 After 11 hours of softball, the Wildcats stay alive for another day.

Now, in order to advance to the Super Regionals, they must defeat Louisville twice on Sunday.

“We just wanted to fight hard, get another chance to play tomorrow,” said Northwestern coach Kate Drohan. “We’re excited thinking about it.”

In the early game, Danielle Williams was nearly perfect in the circle, walking none and striking out 10 in a complete game. She didn’t face a 3-ball count the entire game. But she made two mistakes, both turning into solo home runs.

Her outing was interrupted by a 3-hour rain delay in the fifth inning. When the teams returned, Northwestern nearly rallied in the seventh, scoring their first run of the game with two outs.

“Those last few at bats, that’s how you compete this time of year,” said Northwestern coach Kate Drohan.

Northwestern had to watch the first elimination game, where Southern Illinois took out Detroit Mercy, before taking the field at 9:25 p.m. for their game. But they managed to keep the momentum that they started to build at the end of the first game. The offense got hot, and Kenna Wilkey did more than enough from both sides. Not only did she pitch a complete game, allowing just one run, she hit a grand slam as well. She needed a lot of help from her defense, however, to turn five hits and seven walks into just the one run.

“Kenna was so excited to get the ball tonight, she was overthrowing to start the game,” said coach Kate Drohan. Two double plays in the first two innings helped her settle down.

Brianna Jones of Southern Illinois was instrumental in her team’s success. After throwing over 100 pitches in her team’s loss to Louisville on Friday, the senior entered in relief in the first elimination game and pitched 4.2 scoreless innings. In the nightcap, with her pitch count passing 300 on the weekend, Jones began to falter.

“Brianna took us to another level,” SIU coach Kelli Blaylock said tearfully after the loss. “It’s just a special team. And I’m old enough to know, specialness only comes around so often … getting here just isn’t enough. We wanted to prove we belonged.”

Northwestern had to battle more than just Jones to advance. A thick fog set in as the clocked went later and later – 10, 11, and past midnight in the final inning. The outfielders were nearly hidden from home plate, and Wilkey appeared to be squinting just to read the signs from her catcher. The temperature dipped – 80 degrees in the forecast never materialized – to the 40s by the end of the game.

“We experienced all four seasons out there,” Drohan said.

“All year, one of our strengths has really been playing on our field and understanding it, and knowing just how unpredictable it is,” said Morgan Newport, who went 4-for-4 with two doubles and a home run. “So, when the fog came, we were just kind of like ‘oh, here’s another element that we get to play in today.’”

Despite the high pitch counts this weekend from both Wilkey (166) and Williams (156), Drohan says both are fully available.

“They’re going to give us whatever we ask of them,” Drohan said.

Through two days, Northwestern has more runs in the tournament (24) than any other team. The pitcher’s spot has driven in nine of those, plus four more from Newport, who hasn’t yet pitched this series.

“When we put our minds to it, this team is literally unstoppable,” said Maeve Nelson.