Posted on September 28, 2019 by WNUR Sports Leave a comment 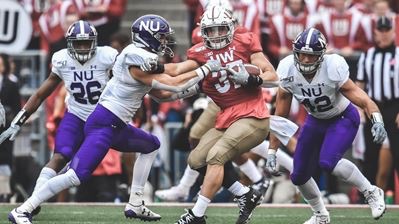 MADISON, Wis. – Entering Saturday’s game versus Wisconsin, Northwestern’s defensive game plan seemed pretty obvious—limit RB Jonathan Taylor and force Jack Coan to beat you with his arm. What the unit could not anticipate, however, was a Northwestern offense that would spot Wisconsin 14 points throughout the afternoon.

Taylor rushed for 119 yards and a touchdown against a Wildcats defense that held him in check for most of the game. All things considered, head coach Pat Fitzgerald was pleased with the effort.
“Our guys did a really good job filling gaps…We’ve tackled well. He [Taylor] really didn’t get out except for the fourth down play. He’s a great player. As I said on Monday, I’d vote for him for the Heisman.”

NU’s defense limited the Badgers to 243 total yards compared to the Wildcats’ 255 and surrendered just a touchdown and a field goal throughout the game. So, what happened? Much like last week versus Michigan State, Northwestern’s struggles came down to the inability to play complimentary football and have consistent offensive execution.

Hunter Johnson’s best play of the game came in the first quarter after a Wisconsin muffed punt when he took off for a 20-plus yard gain to get in field goal range. Other than that, the QB once again looked unsettled.

The offense consistently started in bad field position which led to a third quarter strip-sack recovered in the end zone to make it 14–3 Badgers. Meanwhile, Northwestern’s defense continued to crowd the middle, force Coan to pass, and tackle well on the outside. Travis Whillock led the way for the Wildcats with 13 tackles and a sack. When asked about any frustration with the offense’s struggles, the safety made clear the team’s message.

“I don’t think you can have that mindset. Every time you go out there you’ve just gotta control what you can control. I know they’re gonna go back to the drawing board like we are. We just need to stick together on the inside, and we’re gonna be alright.”

Johnson was eventually pulled from the game after taking a clean hit to the ribs from Wisconsin’s Reggie Pearson. He finished the day 10-21 for 59 yards passing, and for the second straight week, Aidan Smith took the field.

Smith’s outing did not start out well. He threw a pick-six early in the fourth to make it 24–3, but there were signs of promise. He led the offense to multiple scores late in the fourth—one a 4-yard rush by Drake Anderson and the other a 15-yard pass to JJ Jefferson—though they could not convert on back-to-back two-point conversion attempts called in by Fitzgerald.

“When you’re down 15, you go for two. You go for two early, so you will be able to know what you have to go for at the end of the game. You can’t ever know what’s going to happen next…You’re trying to get as many points as you can right here, right now,” Fitzgerald said after the game.

With Johnson now nursing an injury and Smith displaying signs of confidence, it’ll be interesting to see who lines up under center next weekend versus Nebraska. Regardless, the Wildcats are now 1–3 and encroaching the danger-zone for this 2019 season. The good news? They’ve been here before—three years in a row—and have found a way to turn things around in the past.