Posted on November 8, 2019 by Eric Rynston-Lobel Leave a comment 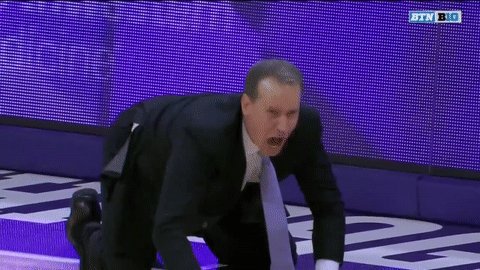 The frustration wasn’t supposed to come this early. But it has.

Northwestern men’s basketball tipped off its season with a shocking 71-61 loss against Merrimack, a program playing just its second game in Division I.

Pete Nance led the way for the ‘Cats with 19 points and 12 rebounds. After missing much of last season due to mono, the sophomore turned in an encouraging performance in the team’s opening game.

That was about all there was to be encouraged by, though. After jumping out to an 8-0 lead all thanks to sophomore Miller Kopp, the Warriors fought back, as neither team would lead by more than six points until Merrimack pulled away at the end.

“We have to play a lot better. There’s no ifs, ands or buts,” head coach Chris Collins said. “I was disappointed in our energy level. I thought their zone lulled us to sleep.”

After coming out of the gate with eight straight points, the game appeared destined to go as expected–a double-digit win for the ‘Cats. But that couldn’t have been further from what transpired.

“We have a lot we have to get better at,” Collins said.

After an abysmal 2018-19 campaign, the fresh blood in the locker room provided some room for optimism despite the team being picked last in the Big Ten by the media in the preseason. But after witnessing a performance like the team turned in on Friday night, most of that optimism should evaporate quickly.

Aside from Nance and the brief second-half spurt from Pat Spencer, there wasn’t much for Collins to hang his hat on.

Just like last year, Kopp was active at the start, but contributed little down the stretch. The offense ran a similar set throughout the entire game, despite minimal results. And, despite the Warriors only having one player above 6’6″ on the court compared to NU having six, the ‘Cats only out-rebounded Merrimack 33-32.

The bottom line is this: it might be the first game of the season, but this is an inexcusable loss. Merrimack lost 84-64 to the University of Maine on Wednesday, a team that finished 5-27 a year ago. Northwestern had all week (actually all offseason) to prepare for this game.

“Like I said all along, it’s incredibly disappointing,” Collins said. “But we’re in a process right now where we got a really young team, and unfortunately we had to learn a hard lesson tonight.”

Even with the young team, though, this is more than a hard lesson. This is a massive disappointment. There are certain components that were reasonable to expect to change after last year: more diversity in the offensive sets and stronger interior defense. Neither came to fruition. Collins promised a faster tempo. The Wildcats had a whopping nine fast-break points.

Sure, it’s one game, and it’s hard to draw accurate conclusions to extrapolate onto an entire season. That doesn’t matter. The definition of insanity is doing the same thing over and over again and expecting a different result.

And this right now is nearing insanity.