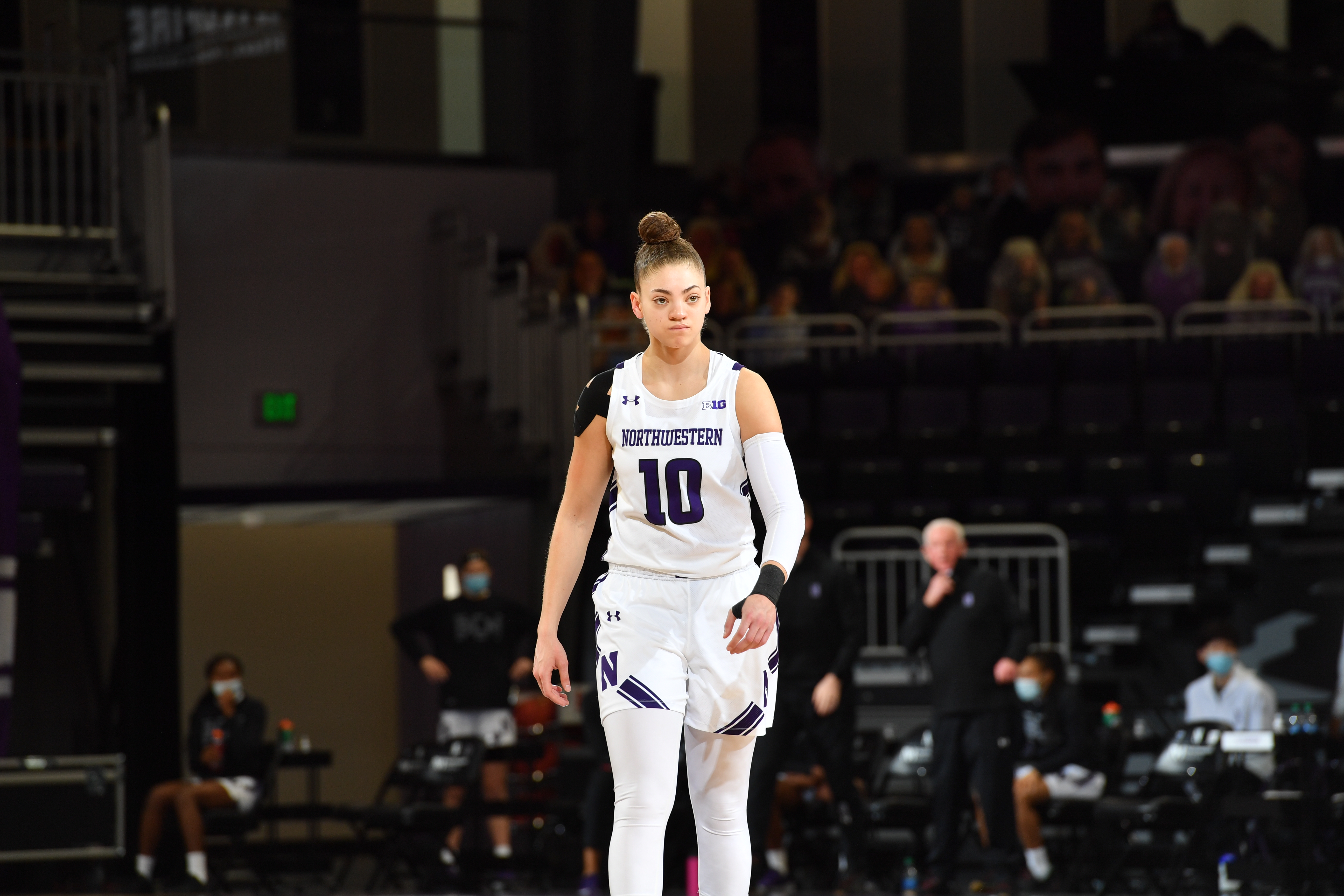 “You Would Think He’s Your Dad”:
The Pulliam-Wilbon Connection

Lindsey Pulliam’s transformed the Northwestern women’s basketball program.
Mike Wilbon’s been one of her biggest fans.

Lindsey Pulliam never envisioned her college basketball career beginning with a 12-20 season played in a high school gym. But as a top-60 recruit, she knew she could make an impact. She just needed some time.

“[After] everything that we went through those first couple years, how we’ve grown has been amazing,” Pulliam said. “How close we’ve become throughout my four years here has been huge.”

The rest of the story is well known. After the disappointing 2017-18 season, the ‘Cats pulled off several improbable comebacks in 2019 to reach the WNIT Championship Game. Less than a year later, Pulliam led the way to Northwestern’s first Big Ten regular season title in 30 years. Now, she’s finally preparing to dance for the first time in San Antonio after last year’s NCAA Tournament was canceled.

One of the commonalities through it all? The support of a close family friend, ESPN’s Michael Wilbon.

“Text messages after games, ‘You played great,’ ‘I’m trying to come out this weekend.’ Just little things like that,” she said. “People will joke and be like, ‘It’s funny, you would think he’s your dad the way he supports you and the way he talks about you and how proud he is of you.’ He’s meant a lot to my four years here.”

As someone who’s covered professional sports for decades now, Wilbon can appreciate how Pulliam’s taken the program to a new level between the WNIT Championship Game, last year’s Big Ten championship team and this year’s presumed NCAA Tournament team.

“We haven’t had three years like that,” Wilbon said. “Not in my life. Not in my time affiliated with Northwestern which goes back to my freshman year, 1976. I don’t know if we had any time like that in the ‘60s. I believe these are the three most successful years we’ve had. She’s at the center of all of that.”

Pulliam just wanted to make a decision already. She was tired of the whole recruiting process. Northwestern was one of her last visits.

“I remember telling my mom, ‘I don’t even wanna go. I just wanna commit and pick a school, and go on with it,’” Pulliam said. “But she’s like, ‘I think you should go.’”

Head coach Joe McKeown had eyes on Pulliam since she started high school. He knew her high school coach and some of her AAU coaches from his ties to the Washington D.C. area after coaching at George Washington for almost 20 years. He thought she would fit well in the program. Now, he just needed to convince her to want to come to Evanston and join a team that had made its only NCAA Tournament appearance of the century in 2015.

In the fall of 2016, Pulliam came out to Evanston, visited the facilities and talked with the coaches and athletic director Dr. Jim Phillips. While she was off with the team, her parents ran into Wilbon.

“When Joe told me he was recruiting her I was thrilled. Thrilled,” Wilbon said. “I happened to be at a football game on a Saturday in the fall, and I’m like, ‘Hey! You guys are on MY campus.’”

Wilbon graduated from Northwestern in 1980, but he says he’s spent more time invested as an alum than he did when he was a student. He’s also good friends with McKeown, dating back to McKeown’s time coaching at GW and Wilbon’s time working for the Washington Post. And yet even knowing his love for the Wildcats and his relationship with McKeown, Pulliam never told Wilbon about her interest in being a Wildcat. “He got mad and was like, ‘You didn’t tell me that you were looking at Northwestern!’” Pulliam said.

But both Wilbon and McKeown suspected Pulliam would carve out a name for herself in Evanston soon.

“As a player, she was just relentless,” McKeown said about watching Pulliam play in high school. “We saw that and the way she carried herself, talking to people (about) how serious a student she was. It sounded like a perfect fit for Northwestern.”

Reflecting on her career, Pulliam acknowledges it’s definitely had its twists and turns. She says she’s not sure if this season will be her last in Evanston, but either way, she can take solace in the fact that she’s found a way to do what she’s always done: win.

Along the way, she says it’s meant a lot to have Wilbon in her corner.

“He’s a big voice in sports,” Pulliam said. “When you have somebody supporting women’s basketball like that and showing support, it kinda gets other people to pay attention and realize that it’s a great game, and it deserves the support and respect.”

But Wilbon would be the first to say Pulliam’s the one responsible for transforming the program. When all is said and done, he’s just a fan.

“It’s been great,” McKeown said of Wilbon’s support. “He’s just a big little kid when it comes to our team, our program and Lindsey.”

As for the Pulliam-Wilbon connection, McKeown summed it up concisely.

“They’ve got a great relationship, and it’s special,” he said. “He’s somebody that she trusts. That’s a big thing.”