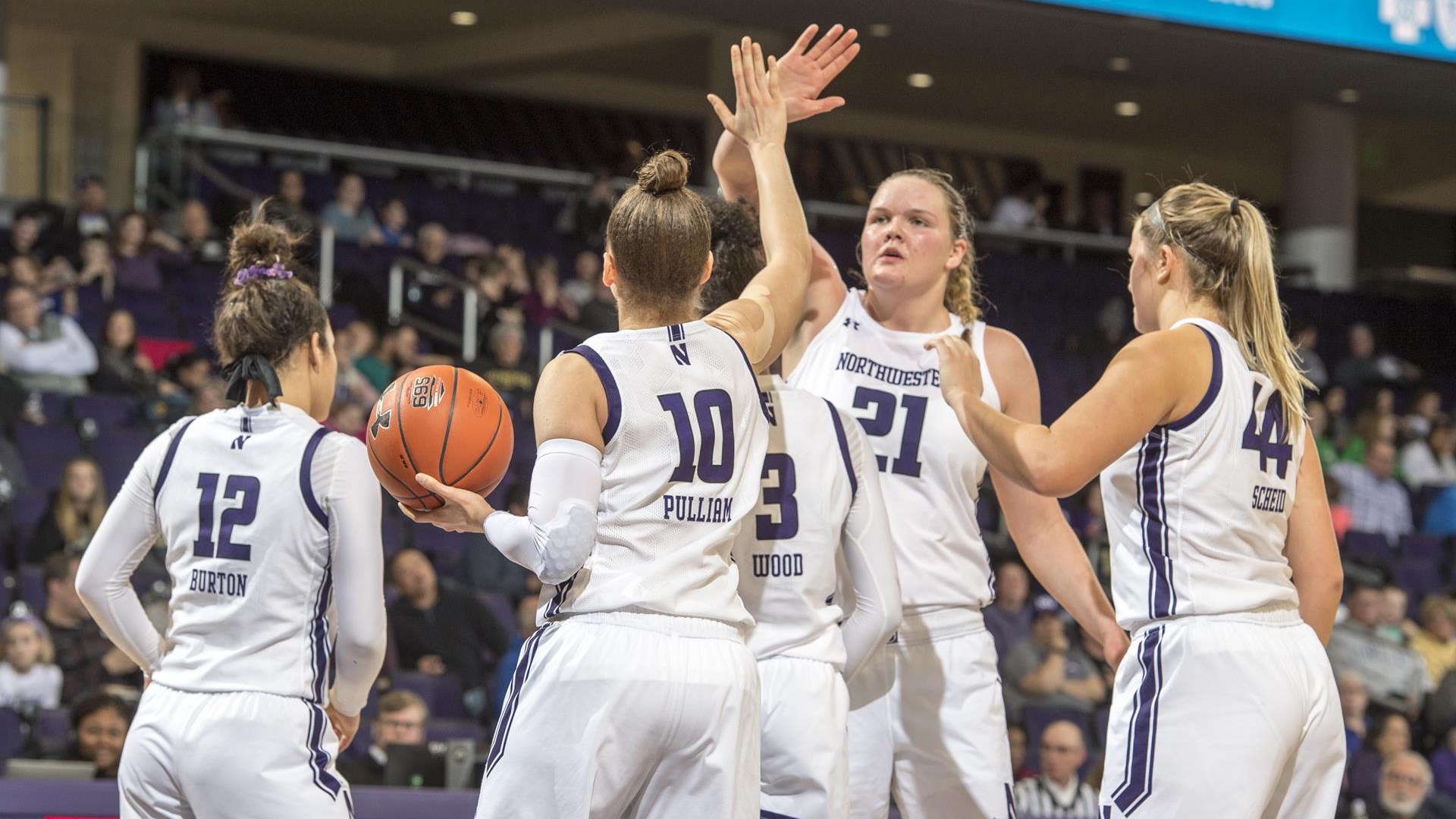 Finally Dancing:
WBB Class of 2020 Excited to See Their
Team Finish What was Started Last Year

After having the 2020 NCAA Tournament canceled, last year’s seniors
prepare to watch their former teammates play in San Antonio.

Abbie Wolf remembers tears streaming down her face while hugging her coaches and teammates goodbye in an empty Welsh-Ryan Arena last March. She had always looked forward to playing in an NCAA Tournament. COVID-19 had other ideas.

The five seniors for Northwestern women’s basketball last year, all foundational components to the ‘Cats Big Ten regular season title and the upward trajectory of the program, would never have that opportunity to dance again. However, it wasn’t all for naught.

“Working all my four years to get to that spot—the grind, the hustle—with all your best friends, that’s the fun part,” Abi Scheid said. “Of course everybody wants to go to the tournament, but I don’t think that took away from what we were able to achieve and the attention we were able to bring to Northwestern women’s basketball.”

The ‘Cats finally have the chance to dance on Monday, though Wolf, Scheid, Byrdy Galernik, Amber Jamison and Bryana Hopkins won’t be able to help finish what was started last season. Even still, they’ll be rooting for their former teammates more than anyone else.

Scheid and Galernik aren’t that distant from the team. They’re still roommates in their Evanston apartment while Scheid works as the director of player development for Loyola Chicago and Galernik pursues her master’s degree from Northwestern.

Wolf, on the other hand, is across the Atlantic playing for CD Zamarat in Spain’s top women’s basketball league. The time difference has made it tough for her to follow along, but that hasn’t kept her fully away.

“I always see stuff the next day on social media,” she said. “Sometimes I’ll have to stay up ‘til like 3:30 a.m. with the time change. For the big games I did do that, especially in the beginning this season. I was just so excited to see everybody in their new roles.”

The last time Wolf played as a Wildcat, the team lost to Michigan in the Big Ten tournament. After Northwestern returned the favor to the Wolverines in Indianapolis a couple weeks ago, the players revived an old group chat from last season. “We were like, ‘That was for y’all. That was payback from last year,’” Lindsey Pulliam said. “We stay in touch with them, and they’re always supporting us. They’re still a big part of our team today.”

Scheid’s currently with Loyola in Frankfort, Kentucky as they play in the Women’s Basketball Invitational. The Ramblers are scheduled to play on Sunday, the day before the ‘Cats take on UCF in the Round of 64, so she’ll have to follow from a distance. If Northwestern wins, though, she’s hoping to head down to San Antonio to watch any game after that in person.

“I think it’s going to be the emotion of ‘they finally get to experience this,’” Scheid said. “Even though I’m not there, I feel like I’m gonna experience it too, just because it’s pretty much the same group of girls that we were playing with. It’s gonna show that all that work has finally paid off, and they finally get to go to the Big Dance.”

Scheid and Wolf already have their brackets filled out, and though Galernik hasn’t filled hers out yet (as of Friday), they’re all in agreement on how far the ‘Cats will go in San Antonio.

“They’re going all the way,” Galernik said. “You can’t doubt the ‘Cats. Cardiac ‘Cats all the way.”