Posted on October 5, 2012 by WNUR Sports Leave a comment 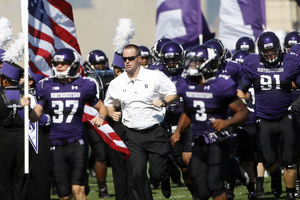 WNUR staffer Drew D’Alelio (@DrewDAlelio) previews Saturday’s football game between the #24 Northwestern Wildcats and the Penn State Nittany Lions, giving the keys for the ‘Cats as they try to go 6-0. Saturday at 11CST, the Northwestern Wildcats will try to stay undefeated vs. the Penn State Nittany Lions, a team that, in the past few months, has battled through the death of their legendary coach, Joe Paterno, the transfer of players and recruits to other competitive Division 1 programs, and a number of sanctions, including a fine of $60 million, a four-year bowl ban, and fourteen years of wins.

The Lions, now led by Bill O’Brien, overcame a brutal 0-2 start to win three consecutive games, which included a dominant 35-7 victory over Illinois, their first conference opponent. The Wildcats look to continue their own upward momentum, but history is against them.

Although the Cats have been 5-0 in three out of five season under coach Pat Fitzgerald, they have never been 6-0. Additionally, Penn State has won in each of the teams’ last five contests, scoring more than 30 points in all five of those contests.

Since the Cats are going for win number six, here are six keys to beating Penn State and remaining undefeated:

1-    Come out firing: Northwestern’s offense needs to come out of the gate and put points on the board, and fast. If this unit feels that they can dictate the pace of the game, it will help them immensely. In their last four contests, Penn State has blanked Northwestern 76-0 in second half scoring, and, as we’ve seen so far with these Wildcats, they tend to wear down in the second half, making the first half that much more important. If Ryan Nassib of Syracuse and Cameron Coffman of Indiana can lead second half comebacks, Matt McGloin and Penn State’s high-powered offense can too.

2-    Win the turnover battle- The Lions have turned the ball over only four times so far this year. Matt McGloin, who threw 14 interceptions in his first two seasons, has only two so far this year. If Bill O’Brien, McGloin, and co. are able to move the football, and keep Northwestern’s offense off the field, they will be putting themselves in a good position to win.

3-    Keep the linebackers off balance- Penn State has arguably the best linebacker unit in the country, led by Michael Mauti, Gerald Hodges, and Glenn Carson. Northwestern’s offensive plan must be centered around putting the ball in places where the linebackers won’t be, or forcing them to make plays in open space.

4-    Don’t be overwhelmed by Penn State, and their fans- Pat Fitzgerald and the Wildcats will be entering a hostile football environment on Saturday, unlike one that they’ve encountered yet this year. Penn State is a very passionate program that is still trying to distance itself from its offseason troubles. The fans will be loud. Not to mention, it’s their Homecoming weekend, placing additional pressure on the players to go out and put on a winning performance.

5-    Pressure Matt McGloin into making mistakes- Although very similar to number two, it is critical that Northwestern makes Matt McGloin uncomfortable. Northwestern can prevent too much weight from being placed on the secondary if the front seven applies consistent pressure to McGloin. The reasons why Ryan Nassib and Cameron Coffman led their teams back from 20+ point deficits was because they had weapons, and plenty of time in the pocket. McGloin has the weapons, notably WR Allen Robinson, and will attack the secondary if he sees opportunity.

Northwestern comes out firing with two quick first quarter touchdowns, and goes into the half with a comfortable 21-10 lead. Despite a shaky second half, Northwestern will maintain the lead until the end, and Kain Colter will lead a final clock killing drive that sends Penn State players and fans to their Homecoming Parade with a loss.