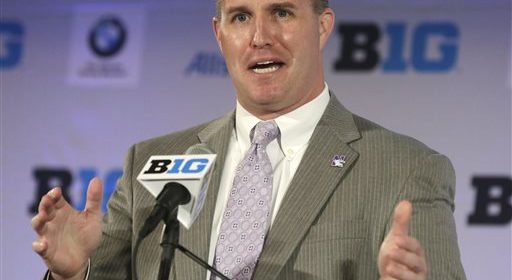 Yesterday, Pat Fitzgerald and the Northwestern Wildcats announced their 2014 recruiting class. There were no Signing Day surprises, and many consider this year’s class to be the best of the Fitzgerald-era.

Most of the 2014 signees were recruited following last year’s Gator Bowl victory. Following the second 10-win season in program history, it’s no surprise that this year’s class is one of, if not the best class in Fitzgerald’s tenure as head football coach. The 2014 class included four 4-star recruits (according to Rivals.com): DE Garrett Dickerson from Oradell, NJ, RB Justin Jackson from Carol Stream, QB Clayton Thorson from Wheaton, and DB Parrker Westphal from Bolingbrook.

However, not all of the 2014 recruits chose Northwestern before the disastrous 2013 football season that saw the team go 5-7 and miss bowl eligibility for the first time since 2006. In fact, both Westphal and Dickerson committed to NU after the season finished, a sign that the 2013 season may not ruin Fitzgerald’s ability to procure solid talent.

This is important. Fans knew Northwestern’s 2014 class would be solid coming off the Gator Bowl win. Since last spring, people argued this was going to be Fitzgerald’s best class ever. But a disappointing season vanguished the hype surrounding this year’s recruiting class. By signing Westphal and Dickerson following this season, Fitzgerald proved that he can make the best out of any opportunity and can sell the program regardless of the record. Does the fact that almost all of last season’s losses were close and could’ve gone the other way help? Maybe. But ultimately Fitzgerald deserves credit for being able to lock up these two guys despite a bad season.

Northwestern fans knew Collins would bring his excellent recruiting skills to Northwestern. But who thought it would make such an impact early? Law is one of the highest rated recruits in program history, and Collins signed him despite the team finishing 13-19 last season. Talk about squeezing blood from a turnip!

This year, Northwestern’s been one of the biggest surprises in the Big Ten. After going 7-6 in non-conference play, the team is 5-5 against Big Ten opponents. At 12-11, Collins is one win away from tying last season’s win total. And with two wins over ranked opponents (although the win over Illinois becomes less and less impressive as the season wears on) and another two against teams that are better than average (Indiana and Minnesota), Collins is proving he can make the most out of the talent available.

While it’s unlikely Northwestern will finish .500 by conference play’s end (then again, I thought it nearly impossible NU could go into Madison and pick up a W), Collins’ first season has been surprising. Going into the season, I thought the recruiting class would be the year’s only positive sign. Instead, the team’s playing inspired under the new coach and breathing new life into the program.

Now imagine the sales pitch next year! Collins can point to this season and say, “Look what I did with a team nobody believed in. Now I have Vic Law and a handful of three star recruits?” Connect the dots! Collins is proving he can transform this program, and if his recruiting prowess remains as potent as it’s been the past year, this program is going to take the next step.

The past year proves one point: Recruiting at Northwestern has never been better. What is perhaps more important than game management and coaching philosophy is finding the right guys who can win at Northwestern. Northwestern isn’t getting the 5-star guys, and they can’t replace the loss of star players the way programs like Ohio State or Michigan can (heck, even Lacrosse struggled to replace the offensive production they lost when Shannon Smith graduated). But Northwestern can still recruit talented individuals who can play at the same level as those 5-star guys being picked up by Big Ten powerhouses.

Collins and Fitzgerald are the future of Northwestern athletics, and as long as that’s the case, we can expect more and more praise being heaped on their recruiting prowesses. Recruiting is not a concern for Northwestern in the near future.