In preparation for Northwestern’s Big Ten Tournament second-round matchup between against the Indiana Hoosiers, here are 3 things to keep an eye on going into the game. The game tips at 5:30 from United Center, you can watch on ESPN2 and listen right here at wnursports.com.

It doesn’t take a basketball aficionado to know that a zone defense is going to force teams to the perimeter. Against a team like Iowa, who doesn’t have a plethora of outside shooters, a zone works perfectly. With a team like Indiana, who is first in the Big Ten in three-point field goal percentage (41.0%), three pointers made per game (9.4), and points per game (78.1), the zone doesn’t play into Northwestern’s hands. It certainly didn’t in the first half of their Feburary 25th matchup, when Indiana went 9-14 from three point range. Yet Indiana went cold, going only 3-17 from three land in the second half. When saying that Indiana’s offense is completely dependant on the three, that is no understatement. The Hoosiers made a school record 290 triples this year. That in short is their offense. Yet regardless of whether Northwestern is in the zone or not, Indiana will stay outside. What the zone will do is prevent the Hoosiers from going inside if they have another 3-17 half from the perimeter. 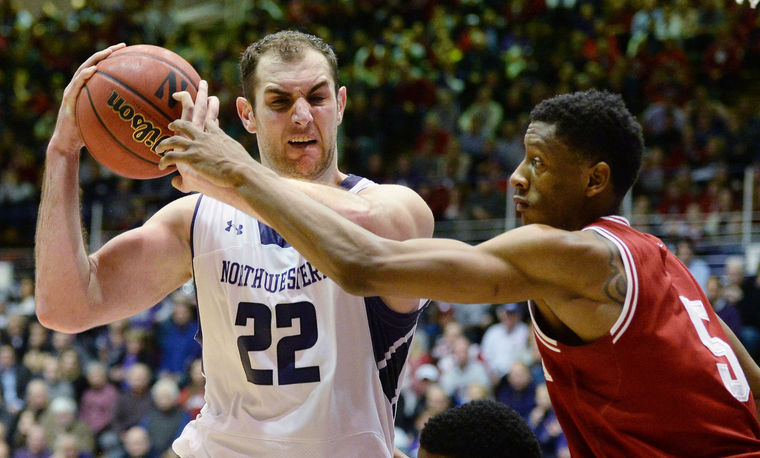 What has become apparent is that unless there is someone who can match the girth of Alex Olah (i.e. AJ Hammons, Issac Haas), he will dominate the interior on the offensive end and on the glass. What is even more apparent is that Olah will dominate Indiana in the post. Hanner Mosquera Perea is 6’9” and he couldn’t match up. Colin Hartman is 6’8” and he will have no chance of matching up with Olah. The Hoosiers are not good defensively, and part of that comes from their lack of effective post play. If Alex Olah is able to play like he has been in the final seven games of the season, Northwestern has a good chance of staying competitive.

With a win, Northwestern can burst the Hoosiers’ NCAA tournament bubble. Having lost four of their last five, Indiana is in serious trouble of missing the NCAA tournament for the second straight year after two consecutive Sweet 16 appearances prior to last season. Missing the NCAA tournament is not acceptable at Indiana, and regardless of what athletic director Fred Glass says, Tom Crean’s job could be in jeopardy. The fan base expects an elite program, and it isn’t getting it. Northwestern wants to win, Indiana needs to win. The energy coming out of the locker room from the Hoosiers will be key in deciding the pace of the game.

Greg won’t make a prediction since he’s calling the game, but WNUR had 12 broadcasters pick the game yesterday