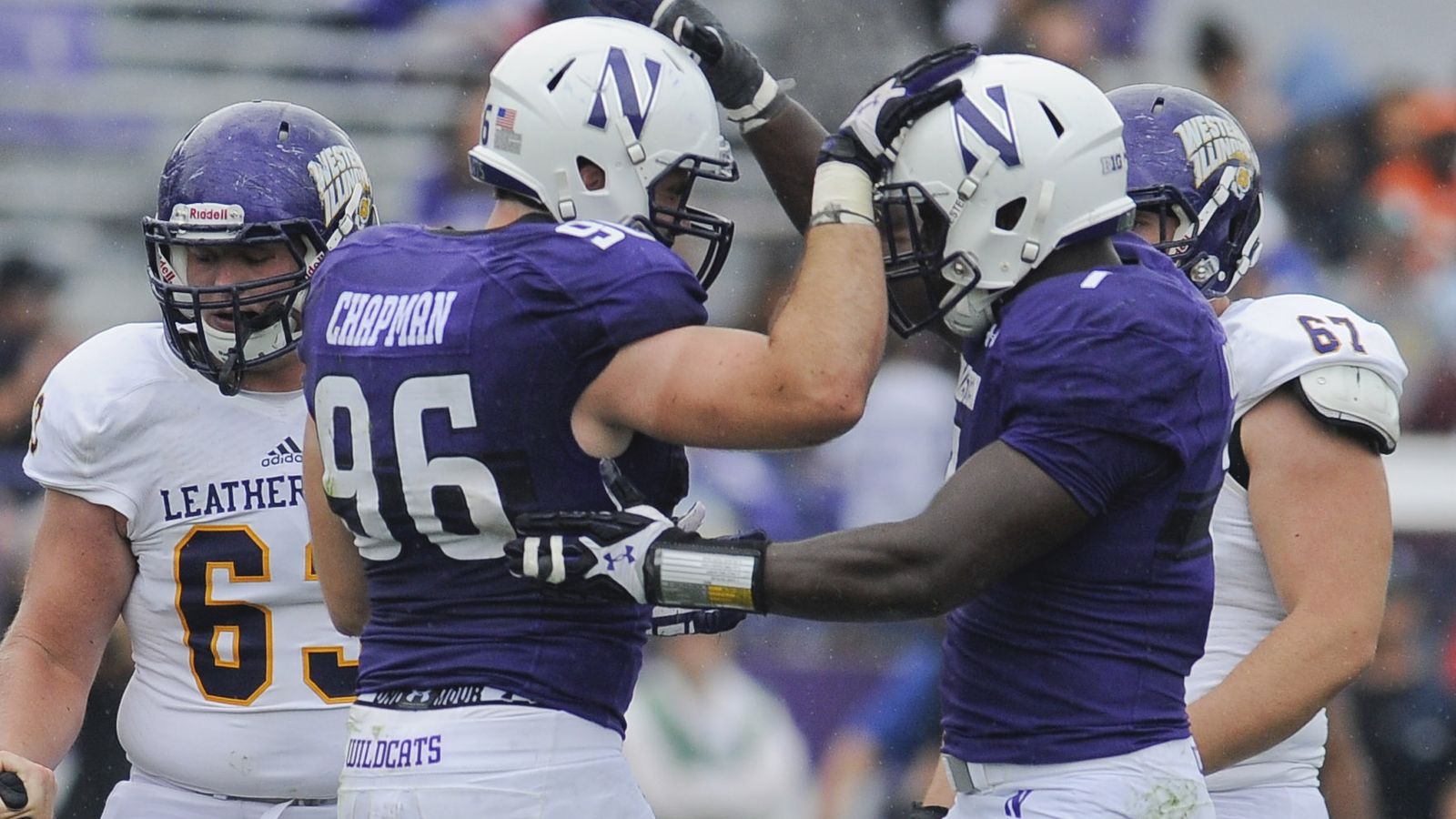 We begin with the defensive line.  Our Ben Goren takes a look at a unit that fell short of expectations in 2014.

Last year, the defensive line was supposed to be the best part of the defense.

On the edges, Deonte Gibson and Dean Lowry were set to make quarterbacks’ lives hellacious and spelling them was a sophomore Ifeadi Odenigbo, a year older and, more importantly, a year bigger.  Up the middle, Northwestern was deep.  Sean McEvilly, Greg Kuhar, CJ Robbins, Max Chapman, and Chance Carter provided plenty of opportunities for defensive coordinator Mike Hankwitz to rotate and adjust on the fly.

Against the run, NU was alright.  The defensive line helped Northwestern finish 47th in S&P+ rankings, and the big guys up front finished 39th in the nation in adjusted line yards.

But when it came to making big plays, the front four didn’t do a whole lot.

NU’s sack rate was 108th in the country.  Its stuff rate, which is the rate at which the ball carrier is stopped at or behind the line of scrimmage, was 79th in the country.  The Wildcats’ Havoc Rate, which includes tackles for loss, passes defended, and forced fumbles, was a firmly mediocre 64th, and the lack of penetration up front had a lot to do with that.

The good news is that they still have a ton of experience and a ton of talent coming back.

Depth, depth, and more depth.  Pat Fitzgerald has talked about having as many as 10 guys fighting for time on the defensive line, and that isn’t hyperbole.

We know pretty much what Northwestern has on the outside.  Gibson and Lowry will start and Odenigbo and Washington will be backing them up.

But on the inside, it is a completely open competition with a ton of bodies battling for playing time.  CJ Robbins was keyed as a starter by Fitz during Media Days.  The other spot? Who knows.  Greg Kuhar has been hampered by injuries his whole career, a torn ACL against Notre Dame the most recent in his lengthy medical record.  Sean McEvilly is coming back for his 6th year, but no one is quite sure how healthy he’s going to be.  Max Chapman has 8 career starts.  Ben Oxley and Tyler Lancaster are getting rave reviews as redshirt freshmen.  Über-recruit Jordan Thompson probably is going to have to redshirt to put on weight, but with an offer list as impressive as his, I’m waiting to hear that he’s redshirting before I write him off.

NU’s defensive line should be permanently fresh during games just because they can go 2 deep on the edges and 6 deep up the middle and still have quality.  This, with the possible exception of the secondary, is the deepest unit on the team.

When is this unit going to make on-paper talent translate to on-field success?

Take away Dean Lowry from this unit, and the front four had just 16 TFLs between them in all of 2015.  That’s with Chi-Chi Ariguzo and Jimmy Hall busting things up from a unit behind them.

This year’s linebacking corps is replacing a lot of talent and won’t be there to bail out the line this year.

Some of Northwestern’s best recruits are in the defensive trenches.  Greg Kuhar was a 4-star guy.  Dean Lowry had offers from half of the Big Ten.  Deontae Gibson had offers from Michigan State and Stanford.  Ifeadi Odenigbo was the 65th best player in the country according to 247Sports.

More than anything else, it’s just head scratchingly weird that this unit hasn’t put it together yet, and it’s hard to bet on them doing so until it happens on the field.

Dean Lowry is in for a monster year.  His number one asset is his versatility.  He starts at defensive end, but when Northwestern goes to their fastball package up front and plays 4 pass rushers, he can more than hold his own as a tackle.  Standing at 6-foot-6 and weighing in at 280 pounds, Lowry is a physical specimen.  He might not have the speed of elite edge rushers, but he more than makes up for it with his strength and his savant-like ability to get his hands up in passing lanes.

Last season, Lowry led the team in sacks and was second in TFLs, and, somehow, was second in pass breakups with 8.  There’s no reason why he can’t do even better this year.  If he can get just a little bit of help from the tackle spots, he shouldn’t face as many double teams.

It’s tempting to say Odenigbo will bust out this year, but I’m not sure I see it.  There were times last year where Odenigbo looked like the stud everyone predicted him to be.  He had three sacks, and the one that stuck out was when he bullrushed a Wisconsin tackle and threw him all the way into the quarterback.

But at just 6-foot-3 and 240 pounds, you can’t help but thinking that he’s being played out of position.  Odenigbo is a 3-4 outside linebacker stuck in a 4-3.  I’m still not sure he has the size to play as an every down defensive end.

The defensive front is deep and talented, but productivity might be another question.