Posted on November 15, 2017 by Matt McHugh Leave a comment 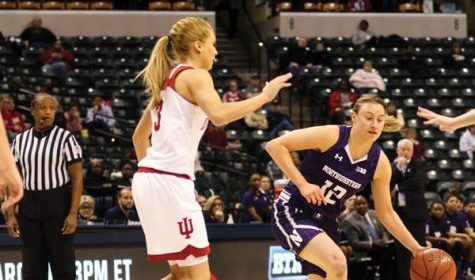 The Northwestern women’s basketball team started their season off strong on Friday, dominating Chicago State 63-36 at the Jones Convocation Center. The Wildcats will try to improve to 2-0 as they host Oakland in their home opener on Thursday at Beardsley Gymnasium.

Oakland comes into this game with a 1-1 record after a 95-63 loss at Michigan State on Monday. Last season, the Golden Grizzlies went 18-12, and 12-6 in Horizon League play. Here are four key numbers to watch in advance of Thursday’s game:

Oakland’s five leading scorers this year are upperclassmen (4 seniors and 1 junior), so they have a ton of experience. This presents a drastic contrast to Northwestern, which started just one senior (Lydia Rohde) in their opener against Chicago State. Coach Jeff Tungate reached the 12-win threshold in Horizon League play for the first time in school history, and with lots of returning talent the Golden Grizzlies might give perennial Horizon League champion Green Bay a run for their money.

Three different Golden Grizzlies are averaging over 10 points per game through their first two games this year. It will be interesting to see how Northwestern responds to Oakland’s diverse offensive attack. The Wildcats will hope to have junior wing Amber Jamison back in the rotation after she missed the first game with an upper-body injury. Even without Jamison’s excellent perimeter defense, the Wildcats held Chicago State to just 36 points on 15 for 63 shooting. By forcing the Cougars to put up tough shots late in the shot clock, the Wildcats showed encouraging signs on defense early in the season.

4 of the 5 Wildcat minutes leaders against Chicago State are underclassmen. The youth movement has begun! Coach Joe McKeown is letting the kids play, and the early returns are promising. First-year Lindsey Pulliam dropped 18 points in the opener to lead all scorers, and first-year Jordan Hamilton led the Wildcats with seven assists. Both first-years are expected to play key roles for the Wildcats all season long.

NU has shot 19.2 percent from beyond the arc in the exhibition and season opener, including 0 threes on 8 attempts against Chicago State. The Wildcats shot 32.5 percent from three-point range last year, and return their top three shooters: Amber Jamison, Abi Scheid and Lydia Rohde all shot over 36 percent from deep last year. Scheid and Rohde will most likely see their shooting nubmers line up with their career averages as the season goes on, and once Jamison gets back in the fold the team’s shooting might even be a strength.