Posted on March 5, 2018 by WNUR Sports Leave a comment

Welcome back, distinguished reader. Our glorious and arduous journey into the heart of madness nears its tantalizing conclusion. We have borne witness to the resurrection of the Hokie and the collapse of the Hilltopper. We have marveled at the breathtaking ascent of the Tar Heel and agonized over the cataclysmic downfall of the Terrapin. And still, the breathtaking ebb and flow of college basketball continues to rise and fall, conspiring to confound us right up until the very last moment. Selection Sunday is just days away, when a new set of 68 protagonists in sport’s greatest drama will be revealed. Who will these characters be? Where will they go? And who will be left behind to languish in their shadows, lost in the madness?

Pretty exciting, right? Because everything moves so quickly in March, I’ve decided to deliver multiple projections this week. Whenever I have a new set of projections ready to share this week, this page will be updated to reflect the new changes. Leave this tab open until Sunday to stay in the loop (or if you’re really devoted and want to inflate my ego, follow me on Twitter). Each update will also be accompanied by a tidbit of the day, in which I devote a few sentences to a noteworthy storyline worth keeping an eye on.

This column will culminate on Sunday, shortly after the conclusion of the AAC championship game, with my final projections. Those projections will be submitted to the Bracket Matrix, where they will be scored based on accuracy and ranked among all other bracketologists. In Bracketology 101, 100% of your grade is based on the final exam. And after failing with my old method, I hope this time to pass with flying colors (by which I mean finish in the top half of bracketologists and/or beat Joe Lunardi).

The newest update is coming your way, right after you read the all-important disclaimers:

TIDBIT OF THE DAY:  Let the record show that I believe that Middle Tennessee deserves a spot in the NCAA tournament. But it’s not my decision to make––it’s the committee’s. My decision is a matter of faith: take selection committee chair Bruce Rasmussen at his word, or call his bluff.

A month ago when the preview bracket was released, he flatly stated to Andy Katz that the committee does not take margin of defeat into account. If Rasmussen is true to his word, MTSU will not be participating in the Big Dance. Their three Q1 wins––Murray State, Old Dominion, Western Kentucky––are likely not compelling enough on their own. Their three Q1 losses, however, speak more to the Blue Raiders’ quality: a 6-point loss vs Auburn, a 3-point loss vs Miami (FL), and a 5 point loss to USC; all on neutral sites. That MTSU was competitive in all three of those games would be enough to tip the scales in their favor. But does being competitive matter?

Bracketology is not about college basketball knowledge. Bracketology is about mind-reading and psychology and trust. Do I trust Bill Rasmussen? It’s a question that will keep me up at night. I will change my mind many times. I will have to come to a decision. But for now, I will give Rasmussen the benefit of the doubt, and leave the Blue Raiders on the outside looking in. 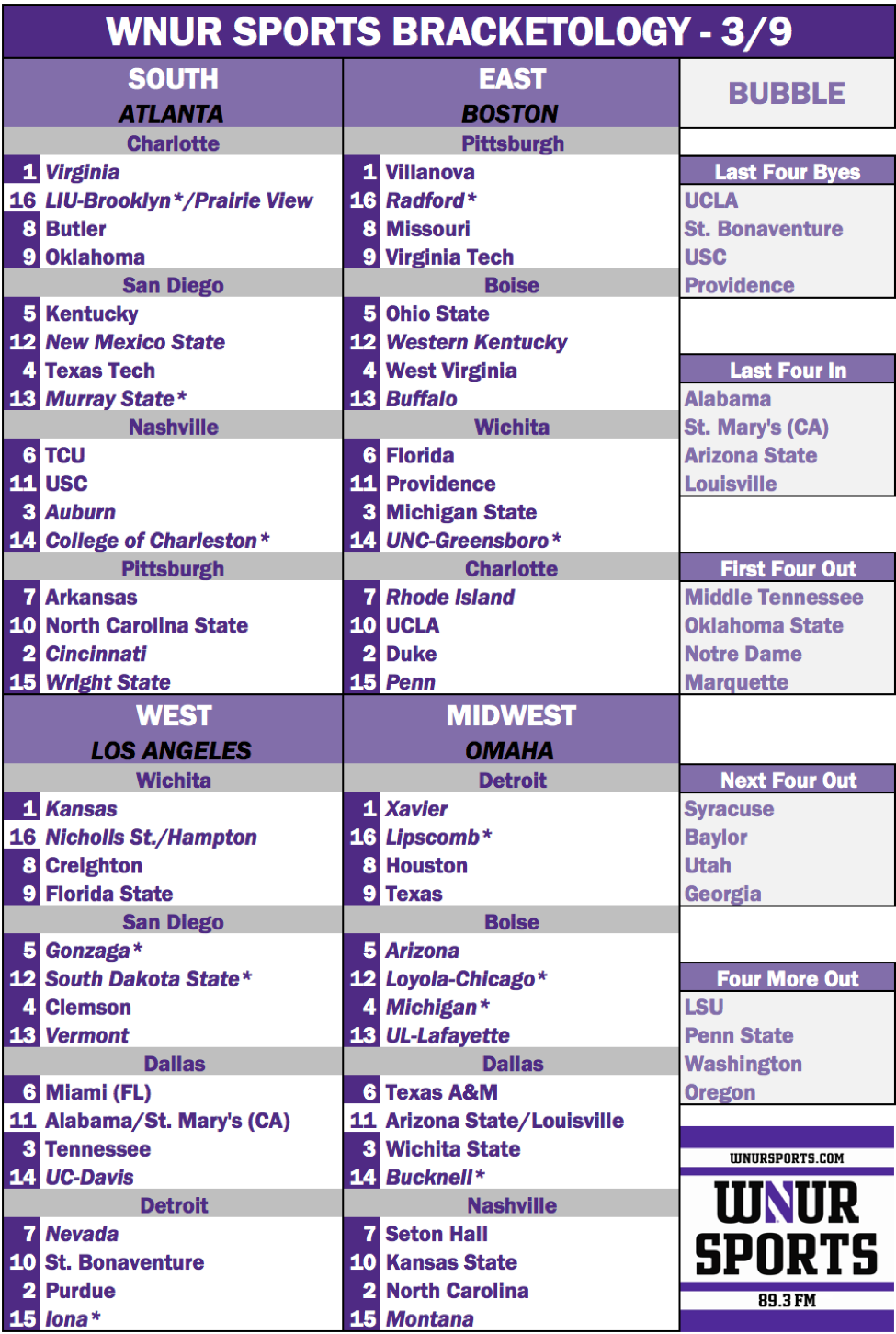 TIDBIT OF THE DAY: After spending the past two months safely in the field, Louisville dropped out on Monday for the first time in this season of WNUR Bracketology. But after just three days, they’re back. The Cardinals’ body of work is fascinating in that is strikingly similar to, yet also the polar opposite of, Providence’s.

But when you dig deeper, you find that these two teams couldn’t be more different. All three of Louisville’s Q1 wins are on the road, they have no Q3/Q4 losses, and the prediction-based metrics (KenPom, BPI, Sagarin) rank them highly (average: 30.33). Providence, on the other hand, has just one Q1 road win, three Q3/Q4 losses (one of their Q4 losses became a Q3 loss, shoutout to UMass) and terrible prediction-based metrics (average: 67.67). On the flipside, Louisville has no signature wins (0-10 vs RPI top 50 teams––this criteria change couldn’t have come soon enough for the Cardinals) and is 5-12 in Q1/Q2 games, whereas Providence has two signature wins (Villanova and Xavier) and is 8-9 in Q1/Q2 games.

The committee’s decision, then, comes down to philosophy. Which is better: Consistently just-above-average performance, or inconsistent performance that demonstrates capability of beating the best teams in the country? What matters more: the past or the future?

Whether yesterday or tomorrow has more significance, I do not know. But I do know that today, Louisville lost to Virginia and fell to 0-11 vs top 50 RPI teams, while Providence beat Creighton, securing an all-important strong non-home victory. Which means Providence is in. But if you read the earlier disclaimers, you know that today is meaningless, for now. All the numbers I just listed don’t account for today’s games, and neither do the projections. So enjoy your return to the field, Louisville, because it might not last very long. 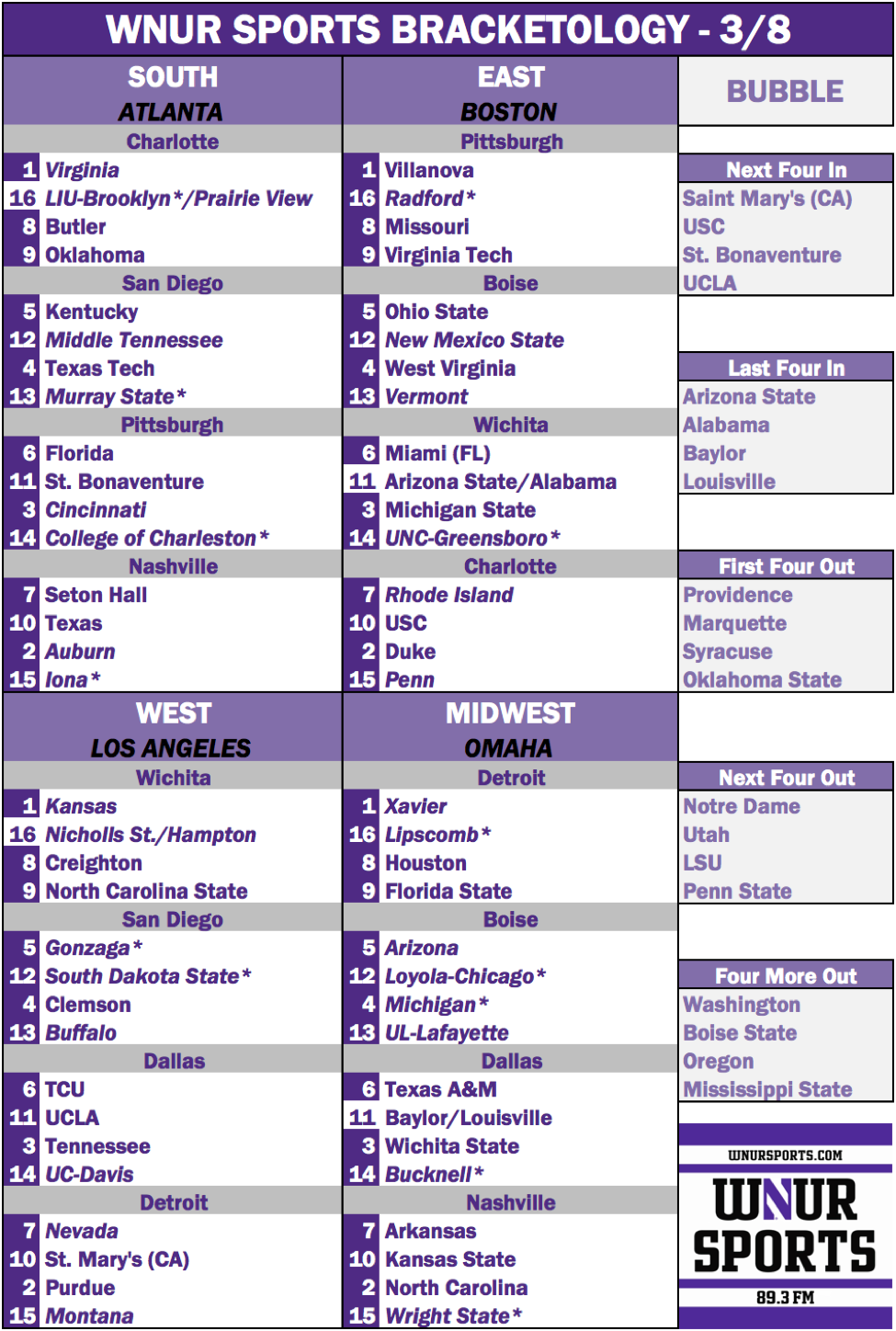 TIDBIT OF THE DAY: I went out on a limb today and left Providence out of the field. In the first season using adjusted criteria to weight road games, the committee could easily make an example out of the Friars by snubbing them. Providence’s best wins came against Xavier and Villanova, both at home. As great as those wins are, the Friars also have a shocking 3 Q4 losses. For reference, the 46 teams in my field seeded 1 through 11 have a combined total of 3 Q4 losses (Full disclosure: One of the Friars’ Q4 losses is a home loss to Minnesota when the Golden Gophers were at full-strength).

Moreover, the Friars have no top 50 non-home wins and are 6-8 outside the Dunkin’ Donuts Center. On the other hand, Marquette has 3 non-home wins against top 50 RPI opponents and is 7-6 away from home. And lastly, the computers detest the Friars, who have an average BPI/KenPom/Sagarin ranking of 67, which is significantly worse than that of all other teams to whom I awarded an at-large bid. The machines hate them, they can’t win on the road, and their Q4 losses cancel out their wins over Villanova and Xavier. In other words, the Friars still have some work to do. 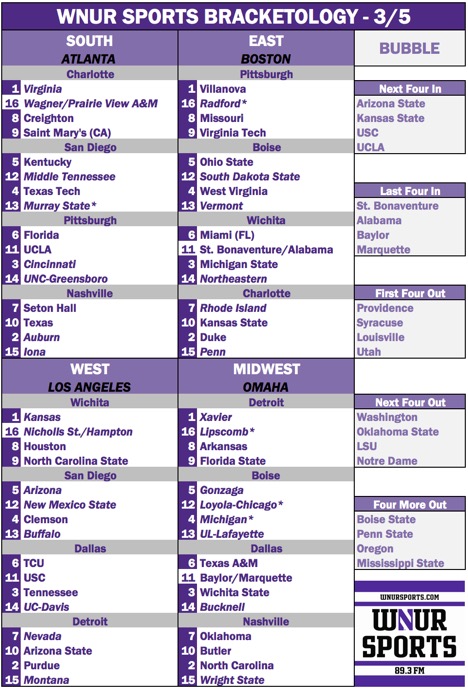